Why We Love Dogs

I have just returned from walking my dogs, which is always a social experience, judging by the amount of people I talk to while I’m out. I usually walk in the local park, which takes me past a playground. My dogs are quite used to interacting with all kinds of people, but even if I decide to go a quieter route, I always bump into someone who wants to interact with my dogs and smiles when they see them. Today was especially active and we are all exhausted from managing the human approaches we experienced, but it makes me feel good that my dogs bring such joy to complete strangers. I often wonder why people are so drawn to dogs in general and how come I get so googly and mushy over any dog I see?

The answer is simple. Our attraction to dogs is innate. Researchers from Rutgers University revealed that when given the choice, toddlers between one and three years old will spend more time interacting with live animals than with inanimate toys. Research has also found that neurons in the amygdala, the brain’s emotional center, respond preferentially to animal images. People are especially attracted to beings with characteristics typical of human infants – such as wide, large eyes and big foreheads. Baby animals produce the same instinctive responses in us as human babies do. 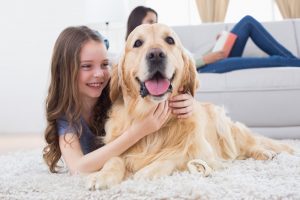 Part of our attraction to dogs is also cultural. While many of us in the West celebrate these amazing animals and have them in our homes, other cultures see dogs as unclean and carriers of disease. We are influenced by the cultures we live in and if our friends and neighbors have dogs, we are more likely to have them ourselves.

Many people want and need dogs to do certain jobs for them and indeed part of the reason dogs have evolved so successfully with us is that they have been incredibly useful. They are good hunting partners, they protect our homes and crops and now dogs are doing even more incredible work by detecting human and animal disease and helping conserve our planet – the subject of my new television show that is currently in production.

Research has also shown that a dog’s attachment to a human is like a child’s to a parent. In fact dogs behave similarly to young children in that they are more apt to explore new situations and environments when a human they trust is nearby, than if that human is absent. This attachment in children is demonstrated by the ‘strange situation test’ where a child will confidently explore a strange environment while the mother is present, but will stop exploring and anxiously await the mother’s return if she leaves for a period of time. When dogs were put through a similar test they behaved in exactly the same way. Not every dog will have a similar reaction, but dogs that are very attached to their guardians will actually have more confidence to explore novel situations if someone they know and trust is close by.

Our attraction to our pups is also chemical. Oxytocin is the hormone responsible for social bonding. When a mother gives birth and holds her newborn baby for the first time, the release of oxytocin helps her bond with her baby. When people fall in love, oxytocin production increases their heart rate, makes them sweat and causes a butterfly sensation in the stomach.  It should not be surprising, therefore, that a 2003 study showed that oxytocin also plays a large part in the social and emotional bonding between dogs and humans. When dogs were petted by their owners, their oxytocin levels rose between 5 to 24 minutes of a petting session, proving that positive social contact is beneficial for both species.

Oxytocin also strengthens social memories in the brain, allowing dogs to bond during social interactions as well as to remember the experience. However this might not always be a positive thing as research shows that oxytocin can also cause emotional pain. This hormone appears to be the reason stressful situations are remembered long past the event and can trigger fear and anxiety in the future. If a social experience is negative or stressful, the hormone activates a part of the brain that intensifies the memory. Oxytocin also increases the susceptibility to feeling fearful and anxious during stressful events going forward.

Dogs and people share more than just a chemical attraction. We behave in a similar way too. When a dog guards resources and space, monopolizes a person’s attention or fights with ‘siblings’ she could be acting out of jealousy. Although this anthropomorphizes intent, the definition of human jealousy includes phrases such as ‘vigilance in maintaining or guarding something,’ and ‘resentment against a rival.’ This seems to explain canine behavior that is pushy, resentful and competitive. It’s very common for dogs to push themselves between hugging couples or invade the space of another dog that is being petted. In fact the presence of human caregivers can cause fights between dogs that are vying for attention or dogs that see others as rivals for that attention.

We also love dogs because they seem to be empathetic towards us. Empathy is the capacity to understand and share the feelings of others and while dogs definitely do show behavior that looks empathetic – nuzzling a person who is crying for example – it is very hard to prove that dogs are actually feeling what another individual is feeling. Dogs certainly show behavior that is more in line with sympathy – feelings of pity for another’s sorrow or misfortune – and have a natural ability to show consolation behavior towards those that are in distress, usually the victim of a fight or argument.

Research has shown that dogs also make us physically and mentally healthier. Not only do they make us more active, they also encourage us to be more sociable. We walk our dogs in places where we naturally strike up conversations with other people, and even if we don’t feel like talking, people will invariably be drawn to us because of our dogs.  A 1980 study of 92 people at the University of Pennsylvania showed that people who had pets were more likely to be alive a year after a heart attack than those who did not have a companion animal – most likely because the animal they had lowered their stress.

At the end of the day most people just want dogs for companionship. The connection we feel towards them might be even stronger than the ones we feel for human family members. Dogs don’t judge us, answer back or lie to us – in fact they are the source of comfort that many people crave. It doesn’t matter who you are, what you look like or what job you do, as long as you are kind to your dog, he or she will love you. It is this trust and loyalty that draws us in and makes us love them right back.