Why Are Dogs Aggressive 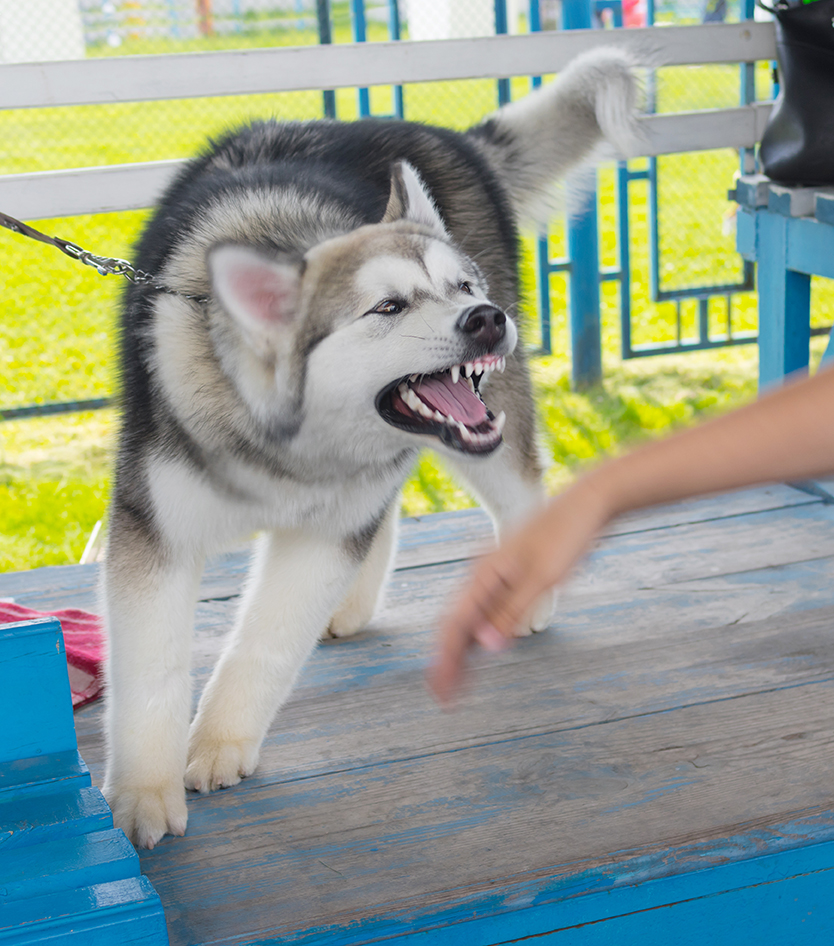 Defining what aggression means is not easy, because there are so many variables associated with what is a highly complex behavior. But by investigating the function served by an aggressive act as well as why it occurs and what result it achieves from the dog’s point of view, we can begin to gain a better understanding. At its core, aggressive behavior addresses the dog’s need to increase distance from a perceived danger and includes threat and action displays, ranging from a subtle lip lift to a deep bite. In most cases the intention is not so much to harm as it is to change the “threat’s” behavior by making it go away.

Aggression is deeply rooted in the dog’s instinctual need for safety. Growling, snapping, lunging, and biting are critical ways of communicating intent, and whether that intent is to warn, intimidate, resolve conflict, increase distance, defend, or cause harm, it’s designed to ensure personal safety and survival. Even on an emotional level, when a dog is fearful, frustrated, angry, anxious, stressed, or in pain, safety is of paramount importance. Most dogs don’t live their lives walking on eggshells, but the functional need for safety is intricately woven into most aspects of aggressive behavior.

Of course, there are those who explain all aggressive behavior in terms of dominance, but as we now know, using the “d word” to describe every dog’s intent can be misleading.  Because the term itself suggests a preconceived plan by the dog to use aggression as a means of establishing an elevated status over others, this fuels an owner’s anger and encourages a rank reduction protocol involving punishment, confrontation, and other unpleasant methods to establish an owner’s authority, which in turn increases the likelihood that the dog will aggress again in the future.

Although aggressive behavior is an effective way for dogs to control their environment, affect behavior in others, ensure priority access to resources, and achieve reproductive success, using the dog’s supposed desire to be the ‘alpha’  to explain why dogs aggress does not do justice to what is really going on in the dog’s mind.  A more accurate explanation lies in the fact that if a dog has not been taught how to function successfully in a domestic environment he will behave the only way he knows how. He may control access to food, space, furniture, or other things that provide comfort and pleasure, by aggressing, but this is more likely done out of fear that he will lose access to those resources and not because he wants to  be “above” everyone else in the household.

So if attaining the position of ‘alpha’ is not the root cause of domestic dogs’ aggressive behavior, what is?

Genetics, health, age, sex, fear, an imbalance of brain chemicals, hormones, and whether the dog is intact or neutered--all are factors that influence aggression. Studies show, for example, that due to higher testosterone levels, intact male dogs between eighteen months and two years of age have a greater incidence of aggression than females or neutered males. It is also important to point out that even though dogs can bite when in pain and because of other medical reasons, there are some cases of aggression that simply cannot be easily explained. These cases are categorized as idiopathic (unexplained) aggression, which manifests itself as a sudden explosion absent of any known trigger. Idiopathic aggression has been linked to chemical disturbances in the brain, such as canine epilepsy.

There is a clear link between anger, anxiety, and fear-based aggressive behavior. This has recently been demonstrated by Dr. Karen Overall of the Center for Neurobiology and Behavior at the University of Pennsylvania, who found that dogs with a history of aggression problems have levels of neurotransmitters and stress hormones similar to those of dogs that suffer from fear and anxiety. When a dog aggresses, he surpasses his stress threshold, causing his limbic system (the emotional brain) to take over as he prepares for flight or fight. When this occurs, the cerebral cortex (the learning brain) is inhibited, explaining why it is so hard to get a dog’s attention and encourage him to learn when he is reacting, as he is at that moment incapable of rational thought. To overcome this situation, a punitive trainer would try to suppress the aggressive outburst with punishment, whereas a positive trainer would immediately remove the dog from the stressor by quickly walking him away or creating some distraction to cut through the reaction. Only when the dog is in a calmer state can he begin to learn again. The secret to successfully treating aggression is to never put your dog in a situation where he goes over his stress threshold. Achieving this requires sensitive, compassionate handling and the manipulation of his environment to set him up for success while working on ways to change the way he feels about a particular stressor.

Unfortunately, we cannot sit down with our dogs and ask them how they feel, but we can observe them closely to understand why they feel. Helping an aggressive dog become more confident by teaching it to see a perceived threat or potential loss of a valued resource in a different light is the key to successfully changing the behavior. For some dogs this can be achieved in a relatively short period of time, but others require more time; each dog learns at a different pace. Positive reinforcement is the most effective philosophy to use in these cases, because the methods have a lasting impact, even on the “red zone” dogs.

Owners want quick fixes for their dog’s aggressive behavior because they worry about what damage their dog may do, but the “quick fix” idea demeans a dog’s emotional experience and is psychologically unachievable. When a dog is suffering from anxiety or fear, it is sheer foolishness to profess that he can be “fixed” quickly; this idea of “success” is dangerous and fundamentally wrong.

Imagine what would happen if people who suffered from chronic fear or attacks of anxiety went to their psychotherapists and were guaranteed they’d be “cured” in an hour, a day, or even a couple of weeks. Those therapists wouldn’t be in business for long. Successfully addressing fear and anxiety-related behaviors in both humans and dogs takes time, patience, and an understanding of what’s going on in the brain and body. It’s true that some positive behavioral modification processes take more time and work on the front end, but the result is a lifetime of positively changed behavior. Quick fixes may suppress the behavior at that moment, but because they don’t actually change it, you could spend a lifetime dealing with the problem

A dog needs time and support to change the way he feels emotionally; punitive training only puts a bandage on the problem without really addressing the cause and changing the way the dog feels inside. Even though it may look like the dog is “behaving” better, continual suppression of aggressive behavior through punishment is very dangerous because every incident creates another negative experience for a dog that is already a ticking time bomb waiting to explode.

Unlike other manifestations of aggressive behavior, predatory aggression is not emotionally driven and is largely influenced by genetics. Some dogs do find it reinforcing to chase other animals or moving objects as it fulfills an instinctive need but this is only the beginning of the predatory sequence. Humans have bred the desire to bite and kill out of the domestic dog, but occasionally a deeper instinct takes over. Although many dogs, including my Sadie, enjoy shaking and disemboweling stuffed toys, this sequence does not translate to live animals or people. Herding breeds are adept at eyeing, stalking, and chasing their “prey,” but they will seldom attack and kill the animals they are herding. Dogs that are motivated by the chase, grab, bite, and kill part of the sequence can be very dangerous to live with, especially around small animals and children.

Aggressive behavior serves many important functions for dogs; it is a deeply rooted natural instinct that ensures reproductive success, safety, and survival. If aggression is successful it can be an effective way to repel a perceived threat and to control resources, space, and environment. On an emotional level, aggression causes extreme stress for dogs, especially if triggered by a traumatic incidence, abusive handling, or an inability to cope with continually changing environments. Regardless of its origins or intent in the dog’s life, aggression is almost never a useful or wanted behavior in any domestic environment and must be treated appropriately in order to preserve the well-being of the dog, the environment, and his human family.

You can find more about aggression and workable solutions for aggressive behavior in my new book, Train Your Dog Positively.

22 thoughts on “Why Are Dogs Aggressive”