If you ask a group of dog trainers to define what an aversive means, you will get many different answers as well as some spirited discussion. Regarding behavior modification techniques, an aversive is ‘the avoidance of a thing, situation, or behavior that is achieved by using an unpleasant or punishing stimulus.’ Adding or taking something away from the dog, situation or environment, dissuades the dog from repeating an undesired behavior, but because ‘bad’ behavior means different things to different people, there is much disagreement on when, how and if an aversive should be applied. 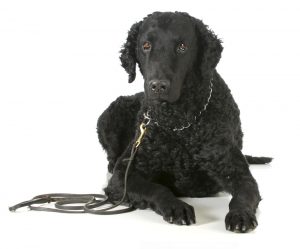 I subscribe to a humane teaching philosophy and believe that it is better for dogs’ overall psychological health to teach life skills instill boundaries and change behavior without using techniques or equipment that intimidate them, inflict pain or cause fear. It would be wrong of me, however, to claim that I never use aversives because it’s impossible to teach without them. Some might argue that you can train a dog without punishment, and while I agree that you can teach any dog without using equipment and techniques that inflict pain or cause them to fear you, even a ‘positive’ trainer will use an aversive at some point, even if they don’t define it as such.

Everyone has a different idea of what is punishing, but in reality an aversive is anything you or your dog finds unpleasant. What is aversive to one dog is not necessarily unpleasant to another, and what you might think is a benign form of punishment could be aversive to your dog. Some dogs are sensitive to an angry look from their owners, while others have built up such a punishment callous from a lifetime of corrective training, that a stern look means very little. I see this a lot in the police and military dog world. Sad as it is, a lifetime of punitive training hardens some dogs to the point where a yank on a choke chain or a dig in the ribs is barely felt, or at least the dog is very good at covering any discomfort they feel.

Trainers who use shock collars to train puppies and dogs will tell their clients that shock collars don’t cause pain when used ‘correctly’, even though a shock collar works by delivering an uncomfortable or painful corrective ‘stim’, ‘tap’, or shock when the dog is doing something the trainer does not like. Shock collars can also be used to ‘force’ dogs to perform behaviors with continued ‘taps’ until the dog complies. While the ‘shock jocks’ might vehemently defend their techniques, methods and philosophies, it’s hard to argue against the growing scientific data showing the stress dogs experience when being trained with shock. Even dogs that are used to being corrected with these devices, might show little concern for the correction on the surface, but will signal their discomfort in small ways that are unseen, misunderstood or ignored by the trainer or owner. Dogs do not lie, and confirmation bias will always make people see what they want to see and blind them to what they do not. Trainers like me advise against shock collar use because we are often the ones that pick up the pieces after a shock trainer has done their damage.

But while positive trainers speak out against methods or devices that causes harm, we still apply aversives, and sometimes the aversives we use can be detrimental to some dogs.  Take the removal of food, for example. This negative punishment (part of the four quadrants) means a (desirable) stimulus is removed to reduce the frequency of a behavior. Simply removing food if the dog doesn’t perform a behavior when asked, can be extremely aversive for food motivated dogs and cause intense frustration. Even though the trainer believes himself to be a positive trainer because he’s not using any form of physical punishment, the removal of food can be highly aversive for that dog.

Another example of negative punishment is when a person walks away from a dog that tries to jump on them when greeting – the person is removing themselves to reduce the frequency of the dog jumping in the future. While this might seem to be a relatively benign move on the part of the handler, they might be missing some vital information that the dog is trying to give them by jumping.

The use of aversive tools differs depending on where you live. Prong collars are not widely used in the UK, while many people in the USA rely on them to stop their dogs from pulling. Harnesses are more popular in the northern United States than the southern part where animal welfare is still playing catch up. People who live in cities don’t need to use shock collars to keep their dogs from running off their properties, while electric fences and shock collars are very popular with people who live in suburban environments.

The problem with positive punishment (where something unpleasant is added to reduce the frequency of a behavior) is that punishment does not teach your dog what TO do, only what NOT to do. The focus of punishment is on control and temporarily suppressing behavior. Suppressed behavior is not changed behavior.

Dogs may begin to avoid the person administering the aversive stimulus or become fearful. A dog may become aggressive and lash out at the person or associate humans with pain and discomfort. Punitive training can break the human/animal bond or the dog may also associate punishment with something that is not the target of the punishment.

For example, when a dog is punished for growling at another dog, the dog may associate the punishment with the proximity of the other dog, rather than with the growling behavior. The dog may then begin to growl from further distances, in order to ‘avoid that proximity,’ which is the situation the dog perceives as causing the punishment. Assuming the human continues to punish the dog for growling at other dogs, over time, the dog will learn to growl at other dogs from further away.

Take a dog that is ‘contained’ behind an electric fence. The dog gets too close to the ‘border’ just as a child runs by, and he gets shocked. He may perceive that the presence of the child or the child’s running by ‘caused’ the painful shock to happen (rather than his proximity to the fence border). The next time a child runs by, the dog may bark and lunge to try and keep the child farther away. This reaction to children can then generalize to other situations. The dog now begins to bark and lunge at children who visit the home or who he sees out on walks.

In the Eight Rules for Punishment, police dog trainer Steve White, gives guidelines for the effective use of positive punishment, not because he condones it, but because he shows how difficult it is to use positive punishment effectively. He explains how temporary cessation of ‘bad’ behavior is extremely reinforcing to the person who administers the aversive, at least for that moment. Unfortunately, people often fail to pay attention to whether the punishment actually reduces future occurrences. If the behavior still happens just as often after punishment is used, the punishment is not working, no matter how good it makes the person feel at that moment. 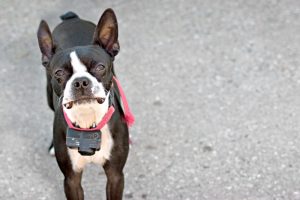 So can aversives be used in some situations and what aversives are the least damaging to your dog? You can offer a vocal interrupter or use the word “no” to stop your dog doing something, exactly like you would a child. It’s not the words you say, it’s how you say it, and as long as you aren’t being intimidating, your dog will respond without being fearful. But if you have a dog that is very sensitive to your raised voice, you are using something that is aversive to her.  Similarly, you might argue that a headcollar is a much safer option than a choke chain to stop a dog pulling on lead, while the person who uses a choke chain will tell you that making your dog wear something around her face is just as unpleasant. While some dogs do well on headcollars, others find them very uncomfortable. For this reason I have stopped using them in favor of the harness, which seems to be the most effective piece of equipment when it comes to a dog’s comfort and safety.

If you are unsure about what aversive your dog finds unpleasant, how do void using them? One of the most effective ways to stop unwanted behaviors is to teach your dog alternative ones. If a dog is doing something that I deem to be unsafe or inappropriate, I will give teach her new coping/life skills to deal with the situation. This gives clients the freedom to teach their dogs’ new skills rather than punishing old ones. For example, I teach a jumping dog to run and get a toy to show off to a new person that has just walked into their home. This gives the dog something to do and diverts excitable energy onto something that makes everyone happy. The dog has the toy, the client does not have to tell their dog off for jumping and the guest is relieved not to be jumped on.

We can argue with each other about what training methods and techniques are aversive, but at the end of the day our dogs don’t lie and will usually tell us if they find something unpleasant, even if their language is disregarded or misunderstood. The learner decides what is rewarding and what is aversive, and it is up to handlers to use kindness as well as common sense, and observe their dogs’ reactions to whatever corrections they apply.