I write this with a heavy heart.  My good friend and training partner for many years died unexpectedly a few days ago.  I am devastated at his loss and still can’t quite believe that he is gone.  The last time I saw him was in October at a fundraising event for the rescue group Stray from the Heart, in NYC.  He had donated a dog photography session for the silent auction and his beautiful photos were on display.  We had a lovely evening and he got to meet the wonderful Bernadette Peters, who has been a supporter of SFTH and other animal causes for many years.  Even at seventy plus years old he looked so handsome in his leather jacket, making the women around him swoon, reminding me of the actor Sean Connery.  People loved him because he was smart, funny, gentle, kind and caring.

Garry Gross was a well known fashion photographer in New York City for many years.  His amazing photos appeared in fashion magazines, advertisements and album covers all over the world.  He lived a wonderfully hedonistic life, never managing to settle down and always on the go – he loved his profession. Garry’s photographs, were to him, studies in art, but a decision to take on a job commissioned by a well known organization, proved to be his downfall.  The resulting controversial photographs made headlines and years later, even after winning a court case regarding these photos, Garry was ostracized by the industry and never worked as a photographer again.

He decided to pursue a career with the other love of his life, dogs.  He went to school and gained his certification as a trainer and that is when he came into my life.  I was working as a trainer in Manhattan and Garry contacted me with a business proposition.  I was skeptical at first, but as soon as I met him and saw his passion for dogs and training, I knew that he would be the perfect business partner for me.  Together we created Dog Trainers of New York, a successful dog training company that in the last ten years has helped thousands of dogs and their people around the Tri-State area.

Garry lived in Greenwich Village and I used to love going down to see him.  We would sit for hours in our favorite restaurants going through cases we had had, developing new ideas and comparing techniques.  He was thirty years older than I was but his energy and enthusiasm was infectious and I never thought of him as an old man.  He loved working together; loved my husband and my daughter and was so proud of me when my idea for a dog training television show came to fruition.  He was a wonderfully supportive person who made everyone he was with feel special. 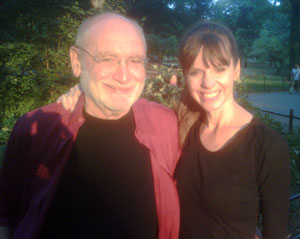 After ten years of training Garry decided that he wanted to pursue photography again, but this time, photographing dogs, and the results were outstanding.  He wanted to concentrate on showing the world how amazing dogs were through the magic of his camera lens.  He was particularly focused on photographing rescue and senior dogs and his photos were nothing short of mesmerizing.

Garry and I had begun to work on a project that he was very excited about.  It was his dream to achieve this.  Unfortunately he will not be here to realize his dream, but I am going to continue working on the project in his memory and make sure that one day his dream will be fulfilled.

Garry you made my life richer and I feel so fortunate to have known you.  Thanks for all the great times we had and for all your support. I will miss you and love you forever.

32 thoughts on “Tribute to Garry”