Home >> Victoria's Blog >> Orca Whales and Pig-Killing Dogs: When Will the Madness Stop? 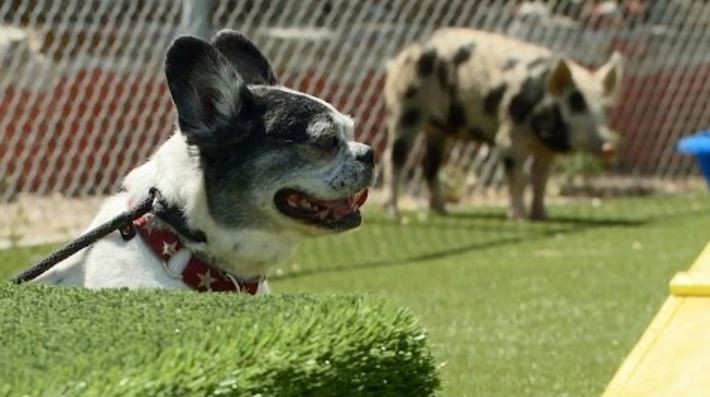 After a devastating documentary highlighting the plight of Orca whales in captivity, followed by a massive drop in attendance and revenue for the Seaworld parks, Seaworld is finally listening to public opinion and making major changes by scrapping its Orca whale breeding program. Seaworld president and CEO, Joel Manby, states that the reason for this change is that "society is changing" and that there has been a 'real shift' regarding people's attitude to Orcas in captivity.

A critical turning point was the 2013 documentary, Blackfish, that brought worldwide attention to the mistreatment of Orca whales in Seaworld parks as well as the danger they posed to the trainers and people who worked with them. Since the documentary aired, attendance has dropped and revenue has plunged nearly a hundred million dollars, cutting Seaworld's stock price in half.

Seaworld partnered with the Humane Society of the United States to work on a solution including no new animals from the wild and stopping its captive breeding program. This is a massive step in the right direction, but what is going to happen to the remaining whales still left in captivity? Animal activists have asked that the remaining whales be released into coastal sanctuaries so they can 'have some semblance of a natural life.' Seaworld says that their whales cannot go back into the ocean as they will not survive on their own.

After the documentary aired, I wrote an article in favor of a ban on captive whales, which garnered intense reaction from both sides. It was hard for me to take a stand because a few years before I had taken my young daughter to see the Shamu show in Seaworld, San Antonio. Watching the whales and trainers interact was one of the most moving and incredible things I had ever seen. I came out of the show in tears, overwhelmed at the beauty of it all and my life forever changed by the experience. But then something started to eat away at me. I had been an actor - I knew that there was always a different story behind the scenes - shows always romanticized reality.  My research on captive Orca whales confirmed my suspicions - keeping these majestic mammals in nothing more than a bath tub and encouraging them to perform tricks for human entertainment was wrong - on so many levels.

Blackfish, though heavily weighted towards the negative, was the icing on the cake.  The evidence proved to be devastating to the Seaworld franchise.

At the end of the day, it all comes down to money - only when it hurts in the pocketbook do people make changes. If Seaworld continued to make billions of dollars off the misery of these captive whales, there would have been no announcement yesterday.  Large, powerful companies have to be brought to their knees financially before change happens and this can only be done when the public stands up and sings for change with a united voice.

A similar situation has just recently occurred in the TV world. National Geographic has vehemently defended their star's (The Dog Whisperer) latest attempts to rehabilitate a pig-killing dog, even when they have received numerous petitions, letters and overwhelming evidence from the general public and from the brightest minds in the animal behavior world, stating that the 'rehabilitation' was stressful and abusive for all the animals involved. But instead of listening, Nat Geo is celebrating the 'outstanding' results of the training because at the end of the show, the dog and the pig are filmed walking 'calmly' together. Not a word about the fact that leashing the pig and dog together caused both animals to shut down, which occurs when animals have been flooded with their fear. This is exactly what happens to animals, children and adults that have experience fear, trauma or regular abuse. Shutdown is a survival mechanism that occurs when the animal or human being is given no alternative and cannot see another way out, and though it might be labeled a success for that moment, particularly by people who lack knowledge in animal behavior, the reality is that if the same dog is put in a confined area with another pig and left to its own devices - the pig will likely be attacked and quite possibly killed.

Flooding rarely works, and shutdown is often misinterpreted and labeled as 'calm' behavior by those who do not understand basic animal behavior. How can one expect the suits, whose business it is to look for ratings and financial success for their company, to stand up for the animals on their channel and take note of the thousands of voices that are telling them that what they are supporting is so wrong. It is not jealousy, animal activism, or even an attempt to discredit a company. It is fact - plain and simple. What if they had put a child in a similar situation?

I do support Seaworld for the decision they have made, even if their hand has been guided by dollars and public opinion. I wish someone at Nat Geo would take off the blinkers and speak up for the animals too, but until the voices sing even louder and ratings drop, that is unlikely to happen.

2 thoughts on “Orca Whales and Pig-Killing Dogs: When Will the Madness Stop?”