My Take on the “Real Horror” of Beverly Hills

Update 6/3/15: Kingsley has now been involved in another alleged attack, this time against a woman who was visiting the home. The woman says she will suffer permanent scarring as a result of the attack. I sincerely hope that Kim will consider using a trainer that utilizes science-based humane training methods who can attempt to reverse the damage done by the highly aversive trainer she has used in the past. Again, I'm disappointed to see that the use of aversive methods has resulted in negative press for pit bull-type dogs. Read more.

Update 11/10/14: I'm sad to say that Kingsley was involved in a serious attack on Richards' niece, Alexia. Richards is also being sued by another woman who was bitten by Kingsley. This dog not only bit the trainer that was shown kicking him and yelling at him on the show, but has bitten other people in at least three other incidences. As I've said time and time again, while suppression of behavior may look glamorous and 'like magic' on television, it can be the precursor to even more devastating behaviors. Unless the family can look to other training solutions that do not use force, fear, or intimidation, the future for Kingsley looks uncertain. I'm sorry to see that the use of these dangerous methods has resulted in more negative press for pit bulls. Read more.

Original story 11/15/13: If I'm not traveling or working, I'm spending time with my family, so that doesn't leave much time for watching TV. I knew of the Real Housewives series, but had never watched it myself. However I couldn't ignore the flood of emails and messages I have received this week about the latest episode of the Real Housewives of Beverly Hills. After watching the footage in question, I came away feeling so disappointed, disheartened and disgusted at what I saw. 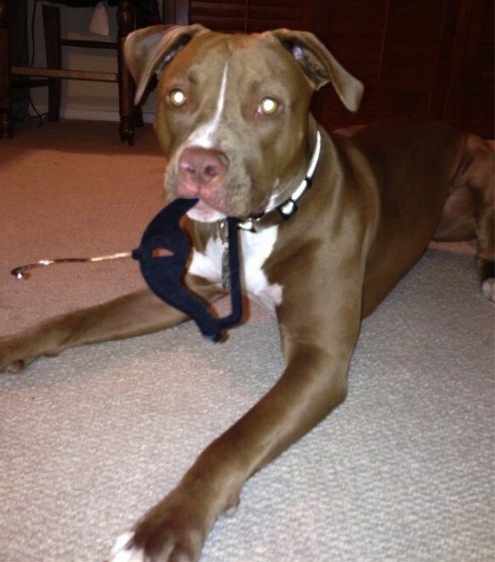 The dog at the center of the scene is a young pit bull mix named Kingsley, who is owned by Real Housewife Kim Richards. Pit bulls are an energetic, excitable breed that need intense physical and mental stimulation. They are also highly sensitive and eager to please people, which makes them excellent candidates for training.

This show had a great opportunity to showcase the incredible intelligence and gentle nature of the pit bull breed by using a trainer that employed positive methods, but  instead a trainer was chosen that put on a theatrical disaster for the camera. I could only sit and grind my teeth as I witnessed a stressed out, highly aroused dog be subjected to kicking, yelling, scruffing, and pushing. Everyone on camera is very lucky they weren't bitten.

When you fight fire with fire, you're going to get burned. When trainers use physical and mental intimidation to "dominate" a large, powerful dog, you're not only asking for a bite, but you're also completely bypassing the root of the problem. The only way to truly change a dog's behavior is get to the bottom of the underlying stress or anxiety causing it.

After so much progress has been made regarding dog training on TV recently (including the decision by Real Housewife of NYC Jill Zarin to appear on an episode of It's Me or the Dog), I'm so disappointed that these ineffective and dangerous methods were highlighted on such a popular television show. I'm also proud of the people I saw stand up for what they knew was wrong and who raised their voice in protest of these training methods. I can only hope that Bravo and other networks will take these calls to action seriously and will not make the same mistake again.