I’ve only ever had female dogs. This has never been a conscious choice on my part, I just fell in love and adopted dogs that happened to be female.  I don’t know if things would be any different if I had a male dog in the house, but people often ask me what the behavioral differences between male and female dogs are and if gender either influences or suits one lifestyle over another.

Despite the obvious physical differences, male dogs tend to be slightly taller and larger than females and exhibit male stereotypic behaviors such as mounting and scent marking. They might show more male to male directed aggressive behavior, especially when challenged. Females tend to be smaller in stature and less likely to mount other dogs or scent mark their surroundings, but can still practice these behaviors in certain contexts. Female dogs also tend to show more affiliative behaviors towards males. 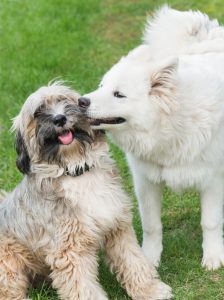 While there are some studies focusing on gender differences in owners interacting with pet dogs, there has not been much research focusing on gender differences between dogs.  Scott and Fuller wrote in the 1965 Genetics and the Social Behavior of the Dog that males grow larger in early adolescence, and that sex does have an influence on “emotional reactivity,” even though the scoring between genders was very close. Females scored 5.0 on their reactivity scale and males a close 4.9.

Companion dog owners tend to care less about gender and more about personality. A dog’s personality is more important than gender for most working and sport dog handlers, but in the police dog world, for example, handlers tend to prefer males over females. Testosterone does play a large part in drive and heightened reaction time, but this can also hinder a police or detection dog’s success as super ‘high drive’ dogs can be less methodical in their work, missing odors and skipping alerts in their desire to move ahead.  Having spent many years now observing and working with police dogs, I have met many female dogs that also need help slowing down.

Having an intact female in the sporting or competitive world might complicate things when she comes into season, but due to competition rules many sport dog handlers will keep their dogs intact.  A good successful sport dog can sire and give birth to many successful puppies, so breeding plays a large part in developing good sporting and working lines. There seems to be more gender bias in the police dog world, and because there are more male than female handlers, male officers want male dogs by their side.

Studies have shown that there are some gender differences when it comes to a dog’s greeting behavior. When dogs first greet each other, males are more likely to greet another male or female dog by smelling the behind first before moving to the face, while females tend to greet face first before gathering more information from behind. Both genders will scent mark or leave urine, feces, or other bodily fluids on an object, in the air, or on the ground. Male dogs tend to lift a leg and mark vertical surfaces while female dogs mostly squat and leave a dribble of urine on the ground. Both sexes will scrape the ground with their back paws after elimination to leave important information behind them.

I have been a trainer for over twenty years and have worked with both intact and neutered dogs of both genders, and while I might see more intact males with a tendency towards impulsiveness and reactivity, I also encounter many spayed females that are highly reactive and wary of other dogs, so this brings me to what is a controversial subject. Should dogs of either gender be neutered and how does neutering affect females and males both physically and behaviorally?

Let me start by saying that even though there are more and more studies being done on the effects of neutering dogs (I use the term ‘neutering’ for both sexes) there seems to be compelling arguments on all sides as to the pros and cons of this procedure. Regardless of any study’s findings, the practice of neutering differs depending on what country and what area of that country you live in. In general people in the UK prefer to wait to spay and neuter their dogs until their dogs are fully grown and have reached social maturity, and eve then many people do not approve of spaying and neutering at any age. In the United States, pretty much every dog is spayed and neutered unless it’s dog that is used for showing, hunting, or is a police or military dog. In some northern European countries, altering your pet can only be done if there is a medical reason, whereas where I live in the southern United States, having an entire dog is frowned upon because of the vast pet overpopulation problem we have here. I live down south on the east coast, but sometimes it feels like the ‘Wild West’ when it comes to animal welfare.

One study suggests that male dogs are ‘more likely to score above the median on owner directed aggression’ and the odds ratio of biting a member of the family is highest for neutered male dogs, followed by neutered female dogs, intact male dogs and the lowest level being from intact females. Similar effects where seen for growling and resource guarding.

Some studies show that spayed females are more likely to display aggressive behavior compared to intact females and that spayed female dogs show increased reactive responses towards humans and unfamiliar dogs as well as aggression towards family members. This change might be because there is a decrease in estrogen and oxytocin concentrations, hormones that have important antianxiety affects. While spaying female dogs might eliminate any behaviors associated with estrus cycles, it also reduces sexual interest.

Since masculinization of the brain in males occurs in the uterus, male and female differences may persist after neutering. Neutering may increase the risk of dogs’ developing noise phobias, while separation anxiety and submissive urination are less frequent in dogs neutered before five months of age. Another study suggests that neutered dogs are more nervous or timid, but engage in less destructive activity than their intact counterparts.

Neutering male dogs eliminates a small risk of testicular cancer and reduces the risk of noncancerous prostate disorders as well. It may reduce the risk of perianal fistulas and diabetes, but studies now show that neutering significantly increases the risk of osteosarcoma (a common bone cancer in medium and large breeds) if done before a year old. It can triple the risk of hypothyroidism, geriatric cognitive impairment and obesity as well as cause issues in bone growth if done too early.

Whether a dog lover is more attracted to a certain gender, it is truly the personality of a dog that connects us. At the Victoria Stilwell Academy (VSA) we teach all our students to focus first on a dog’s personality during a behavior consult before taking breed type and gender into account. Sex does have an influence on behavior and more studies are needed on the behavioral and physical effects of neutering, but it’s the unique character of every dog that makes our lives with them so rich.