Home >> Victoria's Blog >> Beyond the Myth 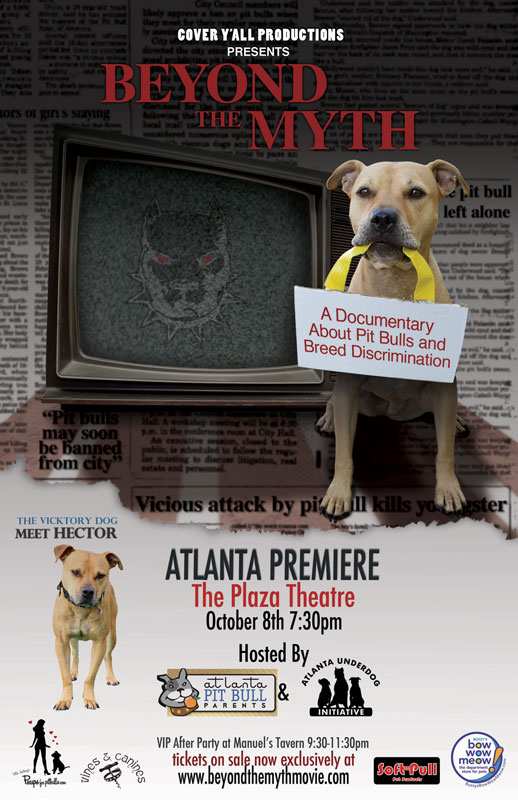 Atlanta, GA., Sept 16, 2011 – Atlanta Underdog Initiative, a pit bull and mastiff advocacy and outreach organization, has partnered with Atlanta Pit Bull Parents, a support and educational group for pit bull owners, to host the Georgia premiere of the documentary film Beyond the Myth on Saturday, Oct. 8 at 7:30 p.m. at the Plaza Theater in Atlanta, GA.  The film—which has been screening across the U.S. to rave reviews and high praise—aims to educate the public about the discrimination unfairly placed on Pit Bull-type dogs, as well as underscore the ineffectiveness and harmful impact of breed specific laws.

Beyond the Myth explores the contributing factors behind the public’s generalized fear of Pit Bull-type dogs and examines the conflict existing between advocates and opponents of breed-discriminatory laws and asks the question “Exactly what is a pit-bull”.  Several Georgia municipalities including College Park, Lawrenceville, and Floyd County have enacted legislation discriminating against dogs deemed to have Pit Bull-like characteristics, despite the fact that there is no one breed of dog known as the “pit bull”, or evidence showing that targeting dogs with certain physical characteristics reduces dog bites.

Filmmaker and former producer for Home and Garden Television, Libby Sherrill was first motivated to create the film as a graduate student at the University of Tennessee and three years later her theme has been honed to reveal stories in four U.S. cities where Breed Specific Legislation focusing on "pit bulls" has profoundly impacted people and animals: Denver, Miami, Cincinnati, and San Francisco. Denver’s ordinance has led to the killing of more than 4,000 dogs since 1989.

Sherrill has poured energy into a film she hopes will bring about awareness to both the cruelty and ineffectiveness of Breed Specific Legislation, as well as debunk the myth that pit bulls are inherently more dangerous than other dogs. “I along with every major animal organization in this country who know something about dog behavior believe every dog, like every person, should be treated as an individual and given a legitimate chance for a great life with a responsible human”, says Sherrill.

Tags: beyond the myth

One thought on “Beyond the Myth”