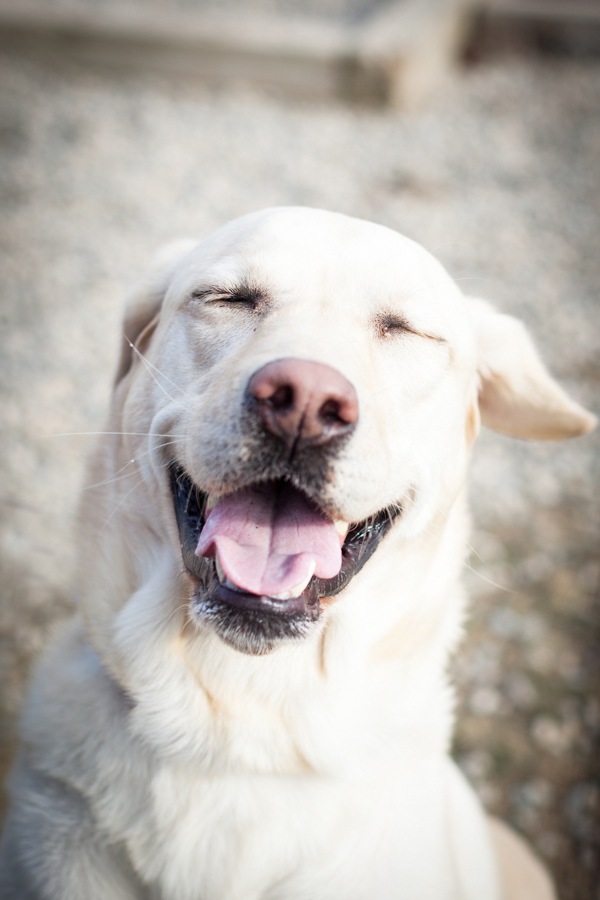 There is much debate on whether a dog’s experience of emotion is similar to that of a human’s or if a dog’s behavior is simply influenced by an inner drive to survive. While we cannot claim to have all the answers yet, science is helping increase our understanding of how the dog’s brain works, producing fascinating insight into the dog’s emotional world.

There are many people who think that while dogs might be emotional beings, their emotional experience is negligible and anthropomorphizing intent or trying to explain emotion in human terms, leads us to misinterpret what a dog is truly feeling. Ask any dog owner, however, if their dog has emotions and the answer is almost always an emphatic ‘yes!’ Just what those feelings might be is impossible to know completely, but scientific and observational study is bringing us a deeper understanding of what is going on in the dog’s mind.

Emotions and Behavior
It is an undisputed fact that emotions drive behavior, moving the dog towards comfort and pleasure, or away from discomfort and pain. Behavior is influenced by physiological processes including the activity of neurotransmitters and hormones. Neurotransmitters, such as serotonin and dopamine, transmit chemical messages in the brains and bodies of dogs and humans and as a result both have the same physiological reactions to behavioral states such as joy, fear, excitement and pain.

Serotonin, for example, has a profound affect over emotions and is responsible for regulating mood, enhancing a positive feeling and inhibiting aggressive response. Dopamine helps to focus attention, promoting feelings of satisfaction. A lack of these neurotransmitters causes irritability, limited impulse control, over reactivity, anxiety and greater sensitivity to pain.

While the physical reaction is similar in both species, the way emotions are processed in the brain could potentially be where the emotional experience of the two species differ. Because human emotions flood through a cortex that is five times bigger than that of a dog (the cerebral cortex is the area of the brain responsible for social inhibition, impulse control, problem solving, thinking and learning), it might mean that while a dog still has impressive cognitive abilities, processing emotion is simpler, unadulterated by a humans’ ability to analyze. Simply put, when a dog emotes, the feeling is very pure and not complicated by complex human thought.

Emotion and the Senses
A dog’s nose dominates his brain; in fact the part of the brain dedicated to scent is forty times greater in a dog than in a human. The dog’s brain is literally built around the information it gets from scent and as smell is so closely linked to emotions, this provides even more evidence that the dog’s emotional experience might be even greater than we could ever imagine.

Have you ever smelt something that evoked a memory? When a dog or human inhales, scent molecules stimulate chemical messages that bypass other areas of the brain and go straight to the amygdala, the brain’s emotional center. The amygdala passes emotional judgments to other structures that collate memories and these are passed onto the cortex. Emotionally appropriate hormones are then released into the body, which also affect mood. Because a dog’s dominant sense is smell and so much of the brain is dedicated to processing scent, this is again strong evidence that dogs could be even more driven by their emotions than humans.

The Food/Brain Relationship
This knowledge provides us with crucial information not just on how the brain works, but how we can use the knowledge to help dogs learn and modify behavioral states such as anxiety and fear. Stimulating a dog’s sense of smell with food, for example, not only motivates a dog to learn, but is a valuable tool in changing the way the brain works.

Some people think that using food as a reward is tantamount to bribery but what they do not understand is just how powerful food is, not just as a motivator, but because food is incompatible with fear.

When a dog is fearful, a number of changes happen in the body. The heart beats faster, blood pressure rises and blood flow is diverted to muscles that prepare for fight or flight. If food is presented before the dog reaches a high level of stress, a positive emotional response can occur in the presentation or anticipation of the food.

There are circuits in the dog’s brain that encourage seeking or hunting behavior and circuits that elicit the fear response. When you turn on a dog’s seeker system, by presenting him with a tasty treat or a toy filled with food, and encourage him to play a game in the presence of something he fears, this activity will turn on his seeker system and shut off his fear. This is one reason why activities such as scent work is so valuable for fearful dogs. In a word, turning on the thinking brain deactivates the emotional brain, enhancing a dog’s attention with positive motivation and allowing him to move into a calmer state where learning can take place.

The Effect of Punitive Training on Emotion
Dogs that are trained with compulsion and force, i.e. trained to behave through fear or pain, suffer higher stress and anxiety than those trained using positive reward methods. Studies have shown that when a dog is punished by being pinned down on his back or side in an ‘alpha roll’ for example, cortisol is released into the body during restraint. Cortisol is a stress hormone produced by an activated amygdala and readies the body for danger. When high levels of cortisol are released, the brain is overwhelmed and this resulting state interferes with rational thought. A person might think their dog is submitting or becoming calm while he is being held down, when in fact the opposite is happening.

Stress from threat causes the dog to ‘shut down,’ effectively freezing him until the threat goes away. In this state of anxiety the dog ceases to learn and becomes more insecure, frightened and/or angry. If he cannot practice avoidance, the only other option left is to bite, which is why so many trainers and owners who use this method of punishment are bitten. Most dogs will get up and shake themselves after experiencing an ‘alpha roll’. This is known as the ‘shake off’, which is an effective way of relieving stress after a negative experience.

Can Dogs Feel Jealous?
If dogs have similar emotional responses to humans, does that mean that they can also feel a complex emotion such as jealousy? Dr. Nicholas Dodman, Director of the Animal Behavior Department of Clinical Sciences at Tufts University in Boston, believes they can. According to Dr. Dodman, jealousy can be defined as “Intolerance of rivalry; apprehension regarding the loss of another’s exclusive devotion; distrustful watchfulness; vigilance in guarding a possession.”

Guarding resources and space, monopolizing an owner’s attention and fighting with ‘siblings’ is all too common in a multi-dog household. "Why should we get inventive searching for other explanations for the behavior when the obvious one is right in front of us," says Dodman. As the saying goes, if something looks like a duck, waddles like a duck and quacks like a duck, it is probably is a duck. Sometimes the simplest explanations make the most sense! 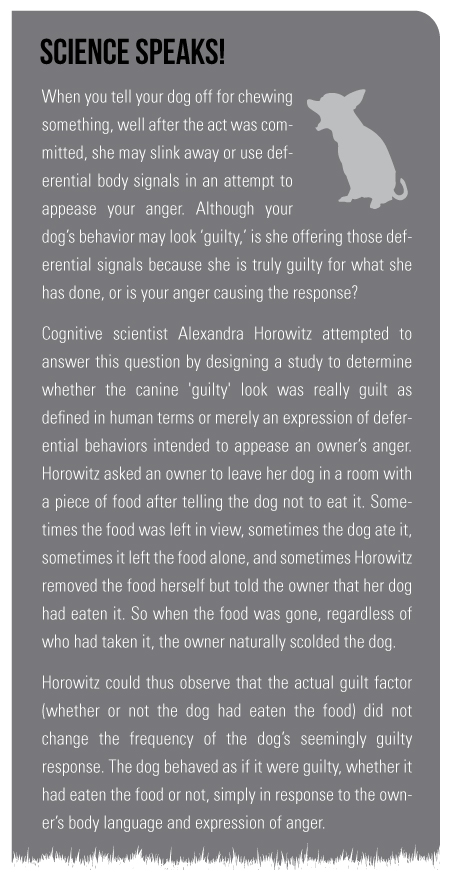 Can Dogs Feel Guilty?
People are often convinced that their dogs feel guilty after they have done something wrong. To feel “guilt,” however, an individual must have not only a sense of self but also an understanding of how his or her behavior has affected others in the past and how it will affect others in the future. We are brought up in a culture that teaches us to consciously feel guilty, shameful, or embarrassed for things we have done – whereas although dogs do have a degree of consciousness and are aware of the immediate consequences of their actions, it is still not known if they are truly aware of how their behavior affects others. Because a dog’s cerebral cortex (thinking brain) is smaller than that of a human, it is believed that the dog does not have the capacity to generate something as complex as the self-consciousness needed to feel guilty or shameful.

Humans are well aware of how they think and feel and how their behavior might affect others. This metacognition or self awareness is linked to our reflective consciousness and is highly sophisticated. David Smith, PhD, a comparative psychologist at the University of Buffalo who has conducted extensive studies in animal cognition, reports growing evidence that animals such as dolphins and macaque monkeys share humans’ ability to reflect, monitor, and regulate their own states of mind. William Roberts and his team from the University of Western Ontario’s Department of Psychology studied whether or not dogs could detect deceit and thus determine whether a person was being helpful or leading them astray. The study’s results suggested that dogs relied heavily on human cues rather than metacognitive ability to learn whether someone was deceiving them.

So in order to be truly guilty, a dog must be mindful about the effect his behavior will have on others as well as knowing and caring what others are thinking and feeling. Although results of this research show that dogs probably do not have the capacity to feel guilt, what is great for all of us who love them is the fact that studies like these are being done—studies that will only help advance our knowledge about the way dogs think and experience emotion.

How to Raise an Emotionally Balanced Dog
When teaching your dog or designing environmental enrichment in the home or in a shelter, think about how your dog’s emotional system drives his behavior and what he needs from you to be confident and learn successfully. Environmental association will affect training successes and careful habituation is needed to ensure success.

Although you should not wrap your dog up in cotton wool, care should be taken to avoid emotional upsets, because fear memories are not erased by the brain and can be hard to modify. Appropriate exercise goes a long way in promoting emotional health and dogs that do not have this basic need fulfilled can take their resulting frustration out in many negative ways including inappropriate destruction, vocalizing, hyper reactivity and aggressive response.

With the enormous advances we are making in our understanding of what drives dogs to do what they do, it is no longer right or fair to devalue or dismiss a dog’s emotional experience as being inferior to ours. Knowing how emotionally driven dogs are, is it not more important that we treat them with the respect they deserve? And just like humans, a dog’s emotional well-being is influenced by early experience. Unstimulating or abusive environments, rough handling and hard punishment can damage emotional growth because stress related pathways in the brain are unable to develop properly, resulting in a dog that finds it hard to make social attachments or cope with domestic life.