Successful positive training relies in large part on determining exactly what motivates your dog the most. While each dog is different and some may be turned on by praise, play, toys, or life rewards like going for walk, very often food is that primary motivating force and can be a powerful tool for shaping new behaviors and helping anxious, fearful and aggressive dogs overcome their issues.

But why is food so effective in training?

To truly comprehend why food is powerful, you must first understand the influence it has on the dog’s brain.

Food has the power to not only enhance a dog’s ability to learn but also to help a dog overcome fear or anxiety by raising the levels of dopamine in the brain and stimulating the desire to seek or move towards the food reward. Dopamine is a neurotransmitter that plays a major role in reward-driven learning and helps regulate movement and emotional responses.

Rather than simply motivating the dog to eat something, food literally changes the dog's brain chemistry – an important first step in everything from training basic cues to dealing with aggression. 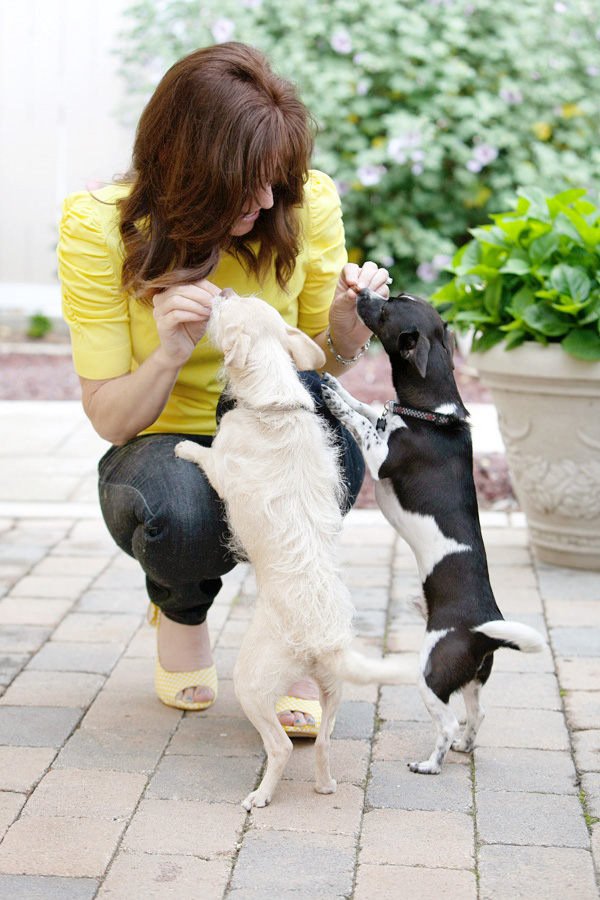 Common questions and misunderstandings about using food in training:

Is using food bribery?
Many who discount the power of positive training often frown upon the use of food in training and claim it is tantamount to bribery.  This argument is usually based on one of two assumptions (or sometimes both):

As for the first point, there is not much that can be for someone with that type of human insecurity. And while the second point above is a more understandable concern, this frequently-repeated myth not only completely disregards the scientific fact that food literally alters an animal’s brain chemistry, but also suggests a fundamental lack of understanding regarding the basic scientific principles of how reward-based training (conditioning) works.

Imagine you arrived at work tomorrow and were called into your boss’ office. You like your job and are generally quite good at it. Your boss praises you for your good work and tells you how glad he is to have you on the team, and then informs you that as of that moment, you will no longer receive a salary. When you ask why, he simply states that you should be glad to work for him because he is in charge and you are not, and that that should be enough for you.  Would you put up with those terms? Everyone needs some kind of motivation to work and learn – even dogs!

Can food be use to train fearful dogs?
Absolutely!  In fact, due to its ability to redirect and marshal a fearful dog's brain chemistry, science has shown that food is indeed the preferred motivating tool used to successfully rehabilitate anxious and fearful dogs:

Should I only use food rewards when training?
The food that is used to motivate your dog to learn must be of high value to him until he is responding reliably.

Once this has been achieved, the high-value food should only be used intermittently, meaning your dog does not always get rewarded with food every time he responds to a cue, but with an alternate reward that might be of lesser value to him, such as praise. Because the dog never knows when a treat is coming he will continue to respond in anticipation that food will appear again in the future.

Such intermittent reinforcement actually makes your dog respond faster and more reliably because this learning is based on the same concept that makes a casino slot machine so addictive.

What if my dog does not like food?
While food should certainly be used as a reward for a dog that is food-motivated, rewards such as toys, praise and play can be just as powerful if a dog happens to be motivated by them. You can enhance your dog’s ability to learn by using whatever motivates him the most first and then varying the rewards you use as your dog becomes proficient at the particular cue or action you are teaching him.

If your dog is not motivated to learn with the kibble he gets for his meals, try coating a little of it with something more tasty such as a little chicken or peanut butter. Or you can feed him less kibble at mealtimes and make up his daily quota of food with tasty, motivational treats used while training.

Will my dog get fat if I keep feeding him treats?
Not if you train him correctly. Measure your dog’s daily food intake. If your dog is going to have a lazy day, feed him less food that day. Similarly if your dog is active and using up energy you should increase his intake.

Cater to your dog’s activity level and use the food he would normally get in his bowl as his rewards for training instead. This will ensure you are not adding extra calories to his diet.

What kind of food should I use?
There is no rule as to what food you should or should not use – your dog will usually make the choice! Some dogs work well for regular kibble, while others need extra incentive in the form of jerky style dog treats or ‘human food’ such as cheese, chicken or peanut butter.  Whatever you use make sure the treat size is small (no bigger than the size of your thumb nail) and the food you use is safe for your dog to eat.

Read more about the value of rewards in training.

One thought on “Using Food in Training”