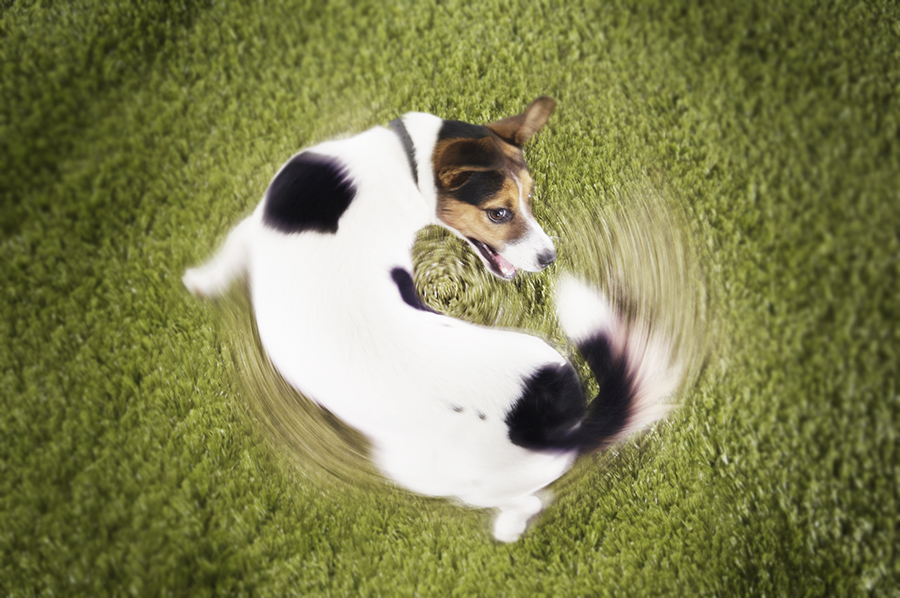 Obsessive Compulsive Disorder (OCD) is a potentially disabling psychiatric condition where obsessive thoughts and compulsive actions such as hand washing, cleaning, hair-plucking or hoarding take over a person’s life. Canine Compulsive Disorder (CCD) is very similar to human OCD in that dogs are also compelled to perform repetitive behaviors which eventually take over their lives.

CCD is exacerbated by anxiety, frustration and stress but genetics also play a part, as many breeds suffer from specific types of repetitive behavior. Spinning and/or tail chasing is prevalent in Bullterriers and German Shepherds, just as blanket or flank-sucking is in Dobermans.
Canine Compulsive Disorder Examples:

CCD can develop in dogs that lead sensory-deprived lives when their basic or breed specific needs are not met. These dogs find other ways to cope by indulging in repetitive actions such as pacing, spinning and licking which serve no meaningful function except as an outlet for pent up stress and frustration. The more these dogs indulge in repetitive behaviors, the more ingrained these behaviors become until they simply cannot stop.

Repetitive or displacement actions are self-soothing at first and act as a release valve for extra energy, but when they take over a dog’s life, behaviors that previously soothed the dog now cause extreme stress. Humans contribute to and exacerbate CCD by confining their dogs for long hours in crates or small kennel runs, failing to provide outlets for their dog’s energy or treating their dogs harshly.

CCD has also been linked to seizure disorders and abnormal brain function, which is why deeply ingrained compulsions usually require medical intervention with anti-convulsant or anti-obsessional medication. This condition can manifest itself in many different ways, each requiring careful consideration when determining how best to try and manage it.

One thought on “OCD Behaviors”