Can Wolves Learn From People? 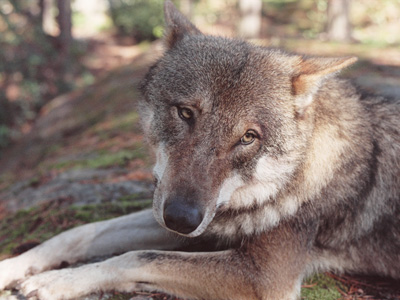 Is a dog's incredible ability to watch and learn from our verbal and visual cues unique to its species? One group of researchers has found evidence suggesting otherwise. Friederike Range and Zsófia Virányi of the University of Veterinary Medicine Vienna conducted a study to find out whether wolves are able to learn from humans the way that dogs do.

During the study, (which was made up of both wolves and mixed-breed dogs) the animals watched as either a human or a specially-trained dog hid a reward in a meadow. The researchers tried various versions of the experiment, sometimes only pretending to hide the reward, and other times hiding it prior to bringing the test subject to the meadow.

Perhaps the most intriguing part of the study showed that the wolves were much more attentive to human demonstrators than to dog demonstrators. The researchers surmised that this could be due to the fact that the wolves anticipated getting food and other rewards from people, but not typically from dogs.

In conclusion a dog's ability to watch and learn from our cues may not be unique after all, and is maybe a trait already present to some degree in its wolf ancestor. This incredible ability may very well have laid the foundation for domestication and evolution alongside humans in the very beginning of man and dog's history together.

2 thoughts on “Can Wolves Learn From People?”