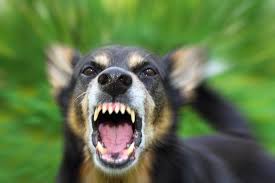 Yet another tragedy!  A poor little boy lost his life to a dog bite.  According to newspaper reports about the incident, he was 'engaged in some kind of horseplay' with the dog and 'may have attempted to climb onto the dog's back.' Media outlets are highlighting the fact that the dog was a pitbull mix and have quoted one behaviorist who states that it’s common for pitbulls 'to show no signs of aggression' until some kind of trigger makes them attack.  I wonder how many pitbull types this 'expert' has actively come into contact with, because I know of no dog breed or mix of breeds, including the pitbull, that doesn’t give warning signs during times of discomfort, irritation, annoyance, anxiety or fear.  Yes, these signs can be very subtle and easily missed - especially by those that don’t understand canine language.  These signs can happen within a split second before the dog reacts.  But there are environmental and situational signs in this tragedy that need to be taken into account and they are very clear:

There are some people who don’t like it when I speak out about punitive training methods and say that because I’m a positive trainer I don’t work with aggressive or ‘red zone’ dogs.  Well that couldn’t be farther from the truth.  I work extensively with canine aggression in private homes and shelters.  I work hard to rehabilitate dogs that have bitten and get them to a place where they no longer feel the need to bite.  I do it without yanking, jerking, hitting, kicking, poking, restraining or using shock collars.  I believe in giving every dog a chance but I am also realistic in the fact that some dogs are just too dangerous to be around humans.  I work with all kinds of breeds and mixed breeds, from Pomeranians to pitbulls. I also work with my colleague, retired police lieutenant, canine aggression and forensic expert and VSPDT trainer Jim Crosby.  We are brought in by police departments if they need help investigating severe maulings or human fatalities by a dog that has happened in their communities.  I help Jim physically evaluate dogs that have killed people as well as working through crime scene pictures or going to crime scenes to determine what happened.  The work can be very distressing but it’s needed in order to find out the truth of what happened and why and to assemble data to educate dog owners everywhere so these preventable tragedies never happen.

So the question comes up yet again:  who was to blame for this horrendous attack? The dog, the child or the parent or relatives that were responsible for the child’s care?  Yes, some attacks are simply tragic accidents while others could have been prevented.  But the plain facts are these:  bites, severe maulings and fatal attacks do not happen ‘out of the blue.’  They are often the result of a perfect storm of environment, situation, misunderstanding and human failure.