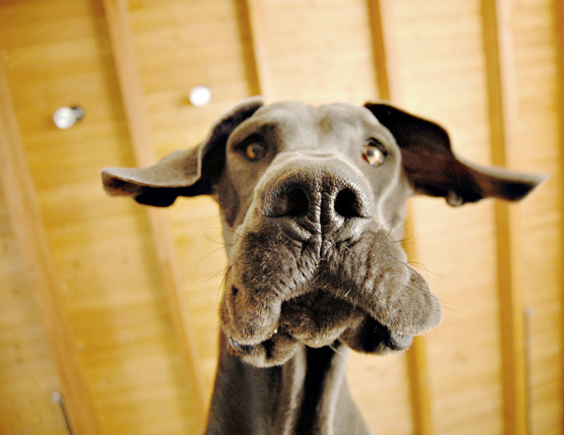 Dogs are not on a quest for world domination. They are not socialized wolves who are constantly striving to be ‘top dog’ over us, and they are not hard-wired to try and control every situation.

Contrary to what traditional training ideologies and much modern media would have you believe, most canine behavior problems stem from insecurity and/or a desire to seek and maintain safety and comfort – not from a desire to establish higher rank and be the ‘alpha’ over you.

Therefore, teaching dogs ‘who’s the boss’ by forcing them into some mythical state called ‘calm submission’ is precisely the opposite of what they actually need in order to learn effectively and overcome behavioral issues.

Much of this misunderstanding stems from the erroneous application of early studies of captive wolf packs to our understanding of the dynamics of our domestic dogs. There are two problems with extrapolating those wolf pack studies onto dogs:

1.   Dogs and wolves are in fact quite different species.
and
2.   The results of those studies have since been disproved by the very scientists who conducted them.

Despite this, terms such as 'alpha dog,' 'top dog,' and 'pack leader' have become part of our society’s readily accepted and commonly understood lexicon. Interestingly, when used to describe human concepts of leadership and rank hierarchy, these terms can indeed be useful and usually pose no problem. But issues begin to arise when we ascribe these concepts to our domesticated dogs, assuming incorrectly that dogs place the same value as we do on the practice of identifying who is of higher rank in any given situation.

Resisting the urge to assign our human insecurities onto how we believe our dogs think and feel is a prerequisite to being able to understand and build truly balanced and healthy relationships with our dogs.

The History of Dominance (in Science)
Our understanding of dominance has evolved over the past half-century as modern behavioral science has continued its study of inter-relationships within the animal world.

For clarity’s sake it is important to understand how the word 'dominance' became so prevalent in describing dog/dog and human/dog social relationships.

The term 'pecking order' was originally applied to explain the social hierarchies of domestic fowl in the 1920's by researchers who observed that chickens commonly established what they assumed tobe social rank by pecking at or threatening to peck each other.

Since then, more advanced studies on social hierarchies have been conducted on many other species, with researchers discovering that although dominant members of certain animal groups were more likely than others to display threatening or aggressive behavior, they most often asserted their influence (dominance) without the use of force. Other members of the group appeased their peers by offering deference (submission) behaviors to the more dominant members.

In other words, dominant relationships among animals are usually exerted without the use of force or threat of aggression, thereby reducing the potential for conflict.

Importantly, some of these studies were conducted on groups of captive wolves, with the findings (since disproved) incorrectly applied to domestic dog behavior. Read more about why assuming dog and wolf behavior is similar is dangerous on the Dogs vs Wolves page.

Alpha Dogs: Misunderstood
Traditional training theorists have led people to believe that social hierarchies among multidog households and human/dog families are rigid, with an 'alpha' (dog or person) at the top of the hierarchy and other members of the human or canine family fitting nicely into fixed slots underneath.

Although social hierarchies do exist among dogs, with certain dogs being more controlling than others, studies have shown that such dynamics are not fixed; rather, they are constantly changing.

Dogs that live in multidog households, for example, are usually able to work out among themselves who has primary access to what, depending on the value each dog places on a resource. For example, certain dogs might place more value on a food resource when it comes to feeding time, whereas others may desire priority to a preferred sleeping location. One dog might not necessarily (and usually does not) control access to every single resource, but will control only those that he deems to be of highest value to him. To maintain a safe and peaceful environment, a dog must be able to accept another’s desire for priority access to other resources. Squabbles and fights occur between dogs when equal value is placed on resources such as food, places, objects or people and desire for priority access increases competition and therefore confrontation. 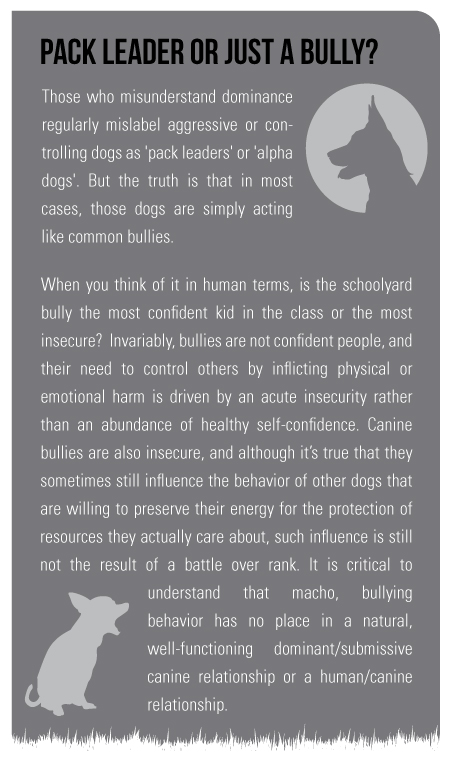 Although disagreements still occur among dogs that have formed healthy relationships with each other, there are some dogs that display socially inappropriate behavior, disrupting the status quo by bullying others. Even though this bullying behavior might appear tough, these dogs are usually quite the opposite of confident and self-assured.

Misdiagnose the Issue, Prescribe the Wrong Treatment
Most of the dog-owning public has long been misled into thinking that treating dominance is the key to solving most dog behavior problems, when the reality is quite different.

Think of dog training in medical terms. As any doctor will tell you, if you don’t know what the root cause of a given problem is, you can’t effectively treat the problem. The diagnosis and treatment process can become clouded when too much emphasis is placed exclusively on symptoms rather than an investigation into possible root causes.

Obviously, if you misdiagnose the disease, you will also usually end up applying the wrong treatment to the patient. In a best-case scenario, the worst you’ve done is delay the patient’s recovery. Ideally, you’ll quickly realize the treatment isn’t working, have the humility to admit your mistake, and apply the correct remedy. In the worst case, however, an inappropriate treatment plan based on the misdiagnosis actually exacerbates the patient’s condition, making it even more difficult to solve if and when you realize your mistake.

Unfortunately for dogs, a misdiagnosis of their behavior problems as dominance-related usually leads to the worst-case scenario. The traditionally-prescribed behavior modification techniques designed to prevent dogs from ‘raising status’ over their owners usually include punishment, intimidation, and fear—precisely the opposite of what dogs really need in order to overcome most behavioral issues.

Bottom Line
Being 'dominant' in the animal world means that force or violence is seldom used to maintain the status quo, so why do some trainers and dog owners still believe that using forceful and punitive techniques to establish themselves as the 'alpha,' 'boss' or 'pack leader' is the correct way to train dogs? This misapplication is where the danger lies with respect to our confusion over what the word actually means.

People have allowed their human concept of dominance (based on accumulating power, establishing higher rank and exerting control in a forceful and sometimes violent way) to not only muddle their interpretation of canine relationships and social hierarchies but also to dictate how they attempt to manage and train dogs.

Science has shown us that forced submission is not at all representative of how animals, including dogs, establish healthy functional relationships between themselves or us.

27 thoughts on “The Truth About Dominance”