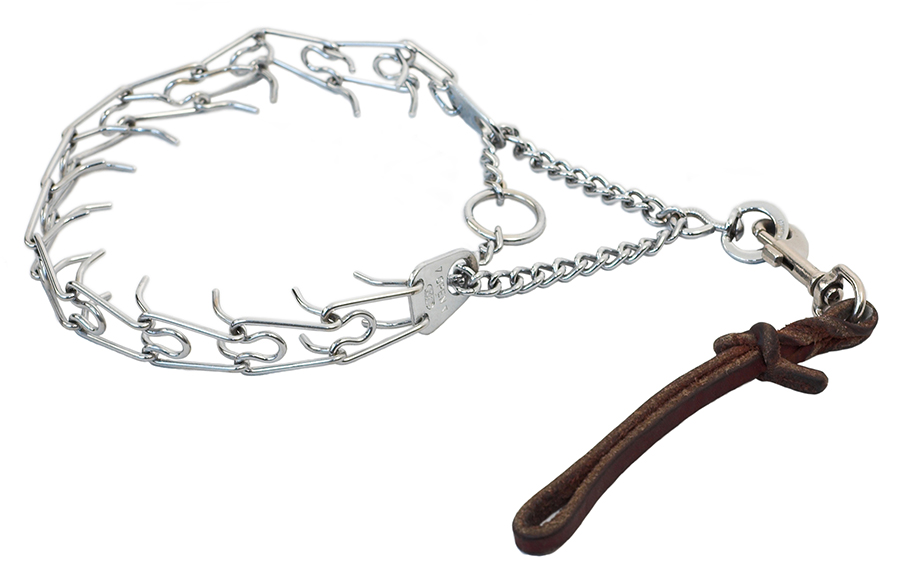 Choke and prong collars are still extremely popular with many dog owners. They are generally made of metal chain material which tightens around a dog’s neck when the handler pulls or jerks back on the leash. Aversive trainers will often use choke and prong collars to perform 'corrections', essentially causing the dog pain any time he pulls on the leash or misbehaves.

While this type of training may stop the pulling or suppress a certain behavior at that particular moment, it does nothing to address the root of the dog’s issue. Leash corrections that are given on these collars exacerbate behavioral issues such as fear and aggression.

Bottom Line
Choke, pinch and prong collars should be avoided in all cases.

Are choke collars safe?
Even if used without corrections, choke collars can still cause pain, discomfort, and injury to a dog’s neck, head and spinal cord.

What kind of injuries do choke collars cause?
The thyroid gland lies at the base of the neck just below the larynx close to where any collar sits. Just one yank can cause injury to a gland that controls many of the body’s vital functions.

Choke collars also affect other areas of the body including the eyes.

How do prong collars work?
Prong collars function similarly to choke collars, except they contain metal spikes on the inside that dig into and ‘pinch’ a dog’s neck if he pulls on the leash. Prong collar advocates believe that the ‘pinch’ action mimics the teeth of a mother dog grabbing a puppy’s neck during a correction.

There is no scientific evidence to back up this claim however, and it's unlikely that dogs make a connection between the pinch of a collar and a correction given by a mother’s mouth, especially as no canine ‘mother’ is physically present.

Why should prong collars be avoided?
Dogs walked on prongs are also constantly subjected to pain and discomfort, which creates fear, anxiety and aggression on walks. Dogs that are already reactive on leash can become even more reactive due to frustration from collar discomfort.

If these collars cause pain, why does my dog still pull?
Dogs cannot tell us when they are in pain. They put up with near strangulation because the drive to pull forward overrides the pain at that moment, but the after effects are serious and long lasting.

What other options do I have to stop my dog pulling?
There are more effective and humane alternatives to using a choke or prong collar on your dog.

36 thoughts on “Choke and Prong Collars”

Choosing the Right Collar or Harness