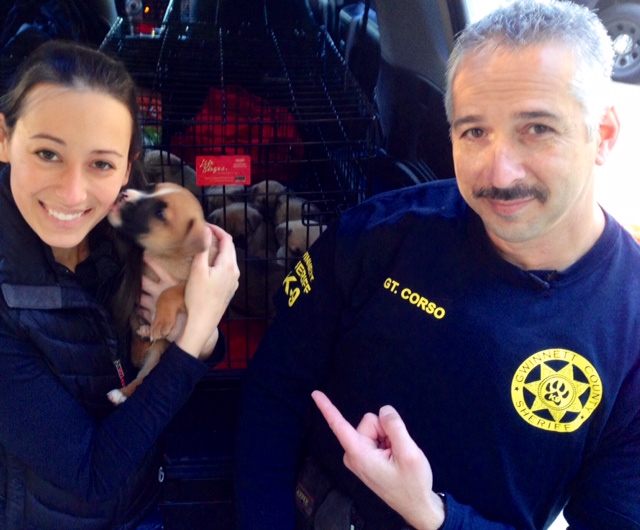 Me and Sgt. Corso with the puppies shortly after the rescue.

Sgt. Paul Corso is a seasoned law enforcement officer. As a K-9 handler, he has served the Gwinnett County Sheriff's Department for over 20 years. Corso has seen a dark side of our world that most of us will never see or understand. It would have been easy for him to walk away when we stumbled on a litter of unwanted puppies during a home investigation, but what he did was quite the opposite.

The story begins with a wanted criminal. We have been filming with the Gwinnett County Sheriff's K-9 Unit for a few months now, so a search like this was nothing new to us. As Victoria's assistant, I get to do some pretty incredible things, but filming with this amazing group of deputies absolutely tops the list. Victoria was out of town for a seminar, so I was keeping her updated throughout the night.

We were looking for a man who ran from the cops (we'll call him "Jimmy") and he had several warrants out for his arrest. Corso and his partner, Jason Cotton, had received a tip about a friend of Jimmy's that might know his whereabouts.

We pulled up to the house in the dead of night. No blue lights, no sirens. Just complete silence as we rolled up to the house. My heart was racing as we headed towards the front door. Almost immediately, a boxer mix came charging towards us. Something about her panicked demeanor told me that she was protecting something more than her home. At this point, some police officers might have shot her. She had charged right up to us, barking so close to me that I could feel her breath through my jeans. But Corso and Cotton understand dogs better than most, and Corso could tell almost immediately that she was not a bite threat. Corso led the way and she let us pass. I steadied my hands on the camera and tried to focus instead on what was ahead. 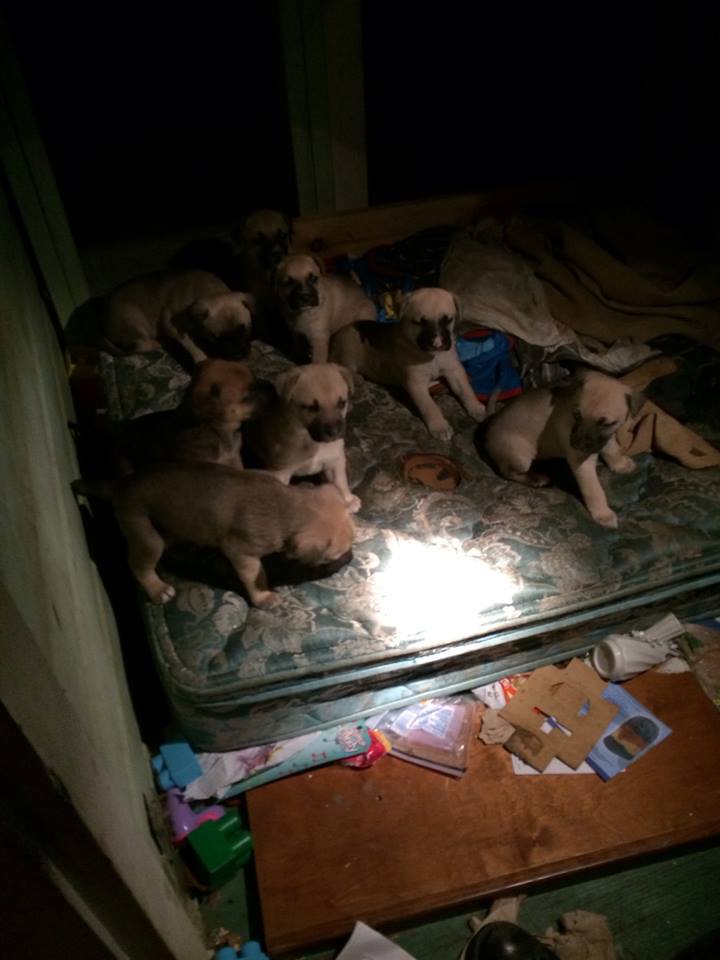 The puppies when we found them.

Corso and Cotton made contact with the residents of the house, who were suspicious at first but eventually let us inside. The house has been a hot spot for illegal activity in the past, so we were wary as we went inside. The cops began their investigation inside the home, talking to the residents and searching the house for Jimmy. We walked around towards the back of the house, and that's when I saw them. There were nine tiny, adorable puppies living on a mattress on the porch. It was a bitterly cold night, and the temperature was going to continue to drop over the coming days. I knew in my heart that all nine puppies would never survive the freeze, and even if they did, what would happen to them? Surely some of them would end up in the wrong hands, and they would certainly add to the pet overpopulation problem here in Georgia.

One of the residents of the house must have seen the horrified look on my face, and picked up one of the puppies.

"You want one?" he asked me, holding the puppy towards me. He told me that they couldn't care for the puppies and were trying to give them away.

I looked at Corso, and he looked at me affirmatively. We needed at least a day to get approval from the rescue group I volunteer for, and to find a foster home for them. We promised the man we would be back for all nine puppies by the end of the weekend.

As promised, Corso and I returned to the property after all the arrangements were made. When we returned, the puppies had been moved to a makeshift pen in the backyard. The temperature had dropped below 30 degrees, so I was incredibly relieved to find that they were all still alive. They were crying and shivering, and licked our faces as we loaded them into a warm crate in Corso's truck. 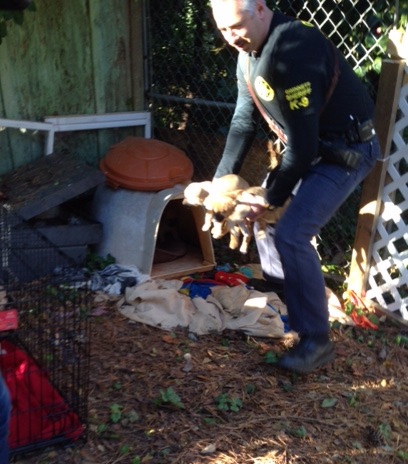 We brought the residents of the home a bag of food for the mother of the puppies, who they were fond of and did not wish to surrender. She was not being abused or neglected--they simply did not have the means to get her spayed and could not handle the financial burden of a litter of puppies. We will be getting her spayed for them as soon as her body has recovered from nursing, and she will never have another litter.

Corso's ability to handle any situation with complete calm and control is amazing to witness. He's one of the funniest people I have ever met, and doesn't take himself too seriously. But when he's working, he's all business and incredibly professional. He had every opportunity to walk away from the situation, but I could tell by the look in his eyes when he saw those puppies that he wasn't going to leave them behind. He chose to add this litter of puppies to his case load, and to save these nine lives from an unknown, and potentially tragic, future. Their happy ending would have been impossible without his help and dedication to seeing the rescue through to the end.

We are lucky to have the support of the Gwinnett County Sheriff's Department, under Sheriff Butch Conway. Sheriff Conway is a dog lover and pit bull advocate who has made an incredible difference in animal welfare through the Jail Dog Program he facilitated at the Gwinnett County Detention Center. 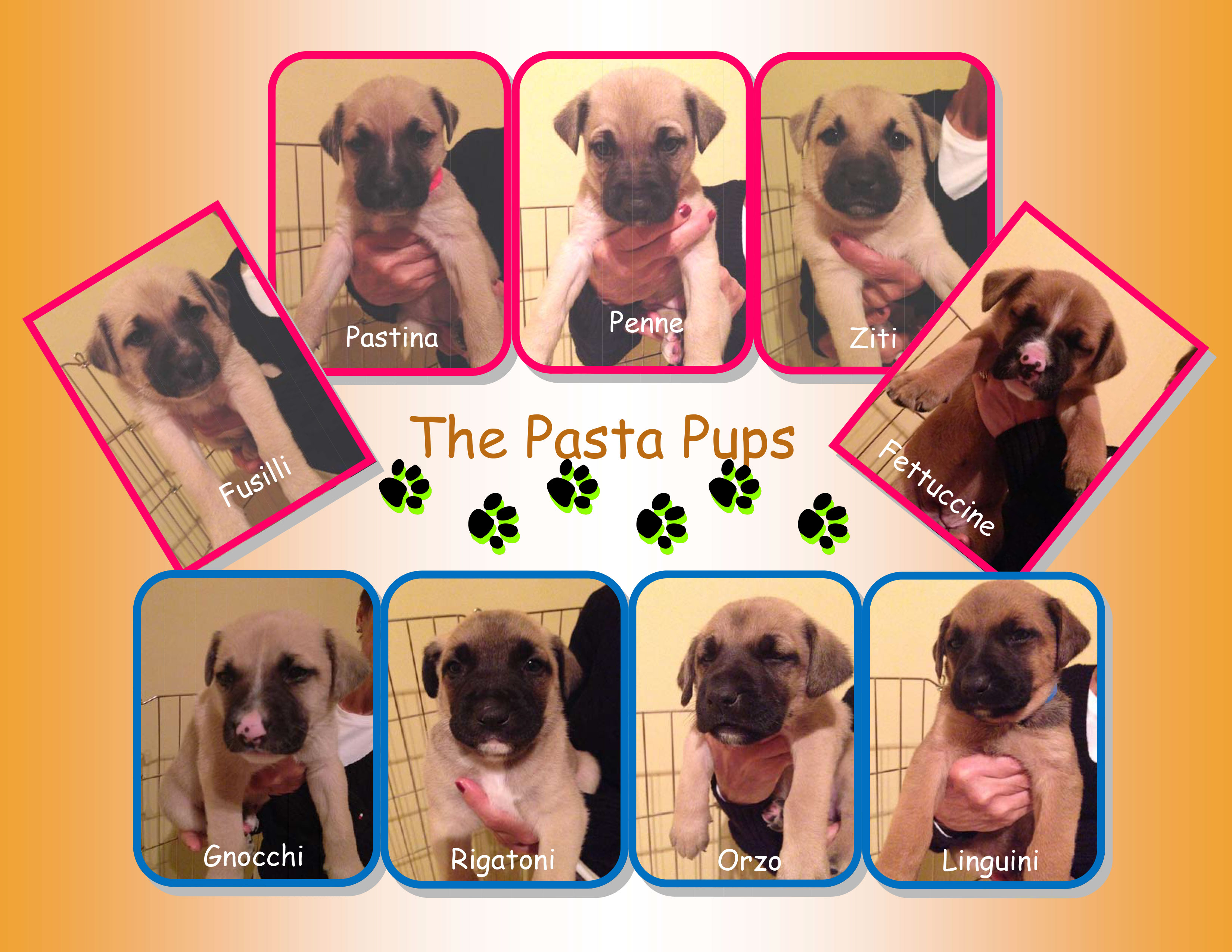 The puppies are now available for adoption through Angels Among Us Pet Rescue.

I'm happy to report that all nine puppies are happy and healthy, and are now available for adoption through Angels Among Us Pet Rescue in Atlanta, GA. We could not have saved the puppies without their help--thanks, AAU!

It truly took a village to save these nine little puppies, and I'm incredibly grateful to everyone who made it possible. 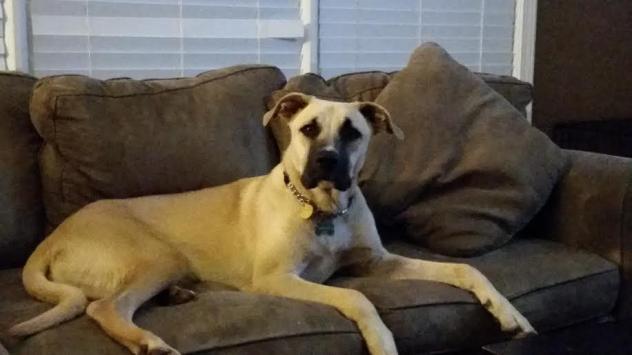 Gnocchi, all grown up.

UPDATE: One year later, the puppies aren't quite puppies anymore! They're all doing wonderfully in their forever homes, which wouldn't have been possible without the help of Sgt. Paul Corso. Here's a picture of Gnocchi, all grown up. These dogs will all go on to lives long, happy lives because a few people were willing to go out of their way to help them. Get involved with your local rescue today, and you can help save lives too!