Home >> Articles >> Why I’m Not a Purely Positive Dog Trainer

Why I’m Not a Purely Positive Dog Trainer

First of all, I have certainly never referred to myself as a ‘purely positive’ dog trainer, but I have heard many others – usually pretty vocal opponents of humane modern dog training – label me and others with that description. It seems to be somewhat of a dog training unicorn, in that there are those who still believe firmly in using ‘anything that works’ with dogs, who speak authoritatively (and usually derisively) about the ‘purely positive’ crowd. The problem is, from where I stand, I honestly cannot think of one trainer I know that is in that mythical ‘purely positive’ club. It is like the people that hurl the ‘accusation’ are not actually aware that their target does not really exist in real life.

Traditional trainers (and users of the ‘purely positive’ moniker) generally believe in using whatever works when training dogs. That can often include positive reinforcement and rewards, but it also means a healthy dose of physical or emotional punishment that creates some amount of pain, fear and/or intimidation in order to get the dog to comply. These trainers prefer to call themselves ‘balanced’, meaning they use a balanced approach which includes all available positive and negative tools and methods when training dogs. I am not a fan of ‘balanced training.’ 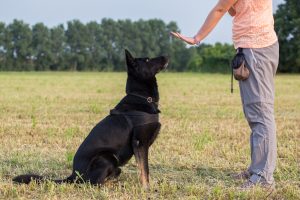 So as a dog trainer, what do I believe, and have I changed my tune since working closely with law enforcement K9 units during my web series, Guardians of the Night?

Here is where it gets tricky: when I started Positively almost 10 years ago, there was no description I could find that accurately described what I and countless other dog trainers like me did and believed. There were lots of names – force-free, reward-based, positive reinforcement, fear-free, and, of course, purely positive – but when you dug a bit into what these phrases really represented, there were holes or inconsistencies when compared to what we actually practiced. As our current political climate is re-teaching us, words matter. So it was important to come up with an accurate description of what we believe and do as dog trainers.

So I created a name: Positive Training. It’s not anything official. You won’t find it in scientific journals or hear a behavioral or cognitive scientist use the term. I coined the term for myself and the thousands of other dog trainers who did not have a neatly-packaged phrase to fit what we practiced and preached. I will get into how I define Positive Training in a minute, but first it is important to reiterate what it is not.

Positive Training is not ‘purely positive’.  Never has been.

Applied behavioral science has provided us something called the four quadrants of operant conditioning, which is a series of terms relating to the various influences that increase or reduce certain behaviors from happening. In short, here is what they are:

Now I honestly do not know for sure what people mean when they use the term ‘purely positive’, but my best guess is that they mean only ever using positive reinforcement from the list of the four quadrants above. The problem is, that is not what most positive trainers do.

In terms of the four quadrants, positive trainers practice both positive reinforcement AND negative punishment. Yes, we reward good behaviors to increase the likelihood of wanted behaviors reoccurring, and we do this in a variety ways – food rewards, toy rewards, life rewards (going for a walk), praise, affection, attention, etc.  And yes, we also remove things that dogs want in order to reduce unwanted behaviors – taking away a treat or a toy as well as utilizing other ways to get the behavior we want – ignoring, interrupting or redirecting behaviors we do not like onto alternate behaviors that encourage the dog’s success.

Positive trainers focus on teaching behaviors we want the dog to do, rather than focusing on punishing behaviors we do not like. We also put great emphasis on giving dogs an element of choice, using natural motivators to encourage problem solving and techniques to increase confidence and promote emotional stability, rather than exacerbating emotional anxiety and instability with traditional techniques and devices intended to suppress negative behavior without understanding why the behavior is occurring and with little emphasis on teaching the dog to do something different in a similar situation.

Aside from the fact that it appears to focus only on positive reinforcement and discount negative punishment, ‘purely positive’ also does not work as a description because everyone’s definition of what can be defined as aversive is different – and that is even before we take into consideration what a dog might find aversive.

Some may argue that taking a dog’s favorite toy away when he is misbehaving (negative punishment, and squarely within what a positive trainer may do) is aversive. When I have to close the kitchen door to keep my dog Sadie from accessing the rest of the house because I have to clean the floors, for example, if you asked her, I’m sure she would tell you that closing the door is aversive for her. Positive trainers routinely do many things that may easily be called ‘aversive’ depending on your definition of the word and your subjective opinion of what is undesirable from the dog’s point of view.  Everyone has a different view on what an aversive is and although we might think something is not aversive to the dog, it is sometimes hard to tell because we don’t know what the dog is actually thinking and the reaction might be so subtle, we miss it. We might think something is not aversive, but it is to the dog. Going out and leaving the dog at home is commonly unpleasant for many dogs, especially ones that get distressed when separated from their human family. It was not your attention to be aversive, but your action of leaving is. So in that sense, again, positive trainers are not ‘purely positive’. 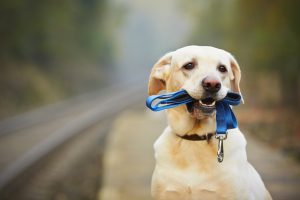 So where do we draw the line with the definition of aversive? How do positive trainers like me define something as an aversive we won’t use?

My work with police dogs has been hugely rewarding in many different ways, but it has also brought out the (usually incredibly vocal) traditional trainers who mislabel positive training as ‘purely positive’ and assume that it cannot or will not work on high-drive dogs like police K9s. It can be threatening when something that you believe to your core is shaken and someone shows you that there is another way. I know – I have been there myself at various times as a dog trainer. But what I find extremely exciting is sharing the opportunity to expand our knowledge of what drives (and indeed what negatively affects) these amazing creatures, both as household pets and as the ‘Ferraris of the dog world’, as police dogs are often called.

Believe me, I would be the first person to hold up my hand and say a working dog such as a police dog cannot be positively trained (using my definition of positive training and not ‘purely positive’) if it were true, but that is simply not the case.  After nearly five years of filming with different k-9 units in different countries, I have seen all methods being used and that includes hundreds of high drive, top class, badass police dogs that have been trained without the use of chokes, shock /e-collars, prong collars or techniques that intimidate and suppress behavior. If it can be done successfully by these departments, then the argument that positive training does not work on high drive working dogs is now debunked.

So call me whatever you want – I’ve been called worse, I can assure you - but stop calling me and other trainers like me ‘purely positive’. It does not make any sense and betrays a lack of either interest or understanding in what progressive positive dog trainers do every day. We are living in a golden age when our collective understanding of animal behavior (specifically dogs) is exploding, and as a positive trainer, it is a beautiful thing to see how effectively, quickly, safely and humanely we can learn from and with our dogs to help make the world a bit better for all of us.