Home >> Articles >> The W-Underdogs – Kids Save Dogs, Dogs Save Kids

In a shabby, litter strewn, overgrown neighborhood in south Atlanta stands an old, white house with peeling paint and rotting wood. The front porch of the house has been repurposed for an outdoor cat area while the inside is home to 15 dogs. Fencing has been constructed outside to create dog runs and are used by the dogs in rotation. Children of all ages can be seen working on different projects, building dog houses, cleaning, painting and feeding the animals. A few adults direct the kids in their activities. When I arrive the children greet me with a happy “Hi Ms. Vikki,” and huge smiles. Living in a mostly white neighborhood, I stand out like a sore thumb here, but the kids don’t care because they don’t see the color of my skin, they just see a woman who cares for their wellbeing and is fighting for their future.

I am a proud board member of The W-Underdogs – a program that was started by disabled veteran Grace Hamlin, one of the bravest people I know. She has taken on entire neighborhoods in south Atlanta, and with the help of kids and their parents, have made them safer spaces to live in. When people are proud of where they live, they take more care of their environment, and the gangs that abuse and demoralize whole communities are driven out.

Not satisfied with the success she has had so far, Grace has now moved into the little white house which is situated in one of the worst neighborhoods in Atlanta. It is extremely dangerous to live there and I can only visit during the day. My journey is always taken with care, but when I get to the house, Grace and the kids becomes my protectors as I am theirs in other situations. 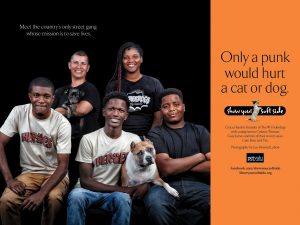 Most of the children in our program live in what we call Section 8 government housing. It is a tough life for these kids and many find themselves unsupported either because their parents don’t care or they are living with a single parent who works two jobs to support their kids and is never home. These children then find solace in gang families, who give them a place to go and a sense of belonging. Kids are given important jobs like running drugs or robbing people and take part in gang initiations such as torturing animals. Those that don’t cooperate are bullied and/or beaten. Everyone seems shocked when the news reports that a 13 year old boy has been arrested for sticking a gun in someone’s face, but this is relatively in many US cities and is now more prevalent in the UK. It doesn’t matter if the kid uses a gun or a knife – both are deadly.

What does the neglect and abuse of children by parents, family or gang members have to do with animals? Animal abuse has historically been a crime that, until recently, has received less attention, punishment and prison time, but things are changing as law enforcement officials learn of the undisputed and proven link between animal abuse and human directed violence, especially towards children, women and the elderly. A comprehensive 2014 study conducted and compiled by the National District Attorney Association, The ASPCA, The National Center for Prosecution of Animal Abuse, and the National Center for Prosecution of Child Abuse, highlights the link between animal cruelty and violence in poorer communities and shows how this link is just coming into focus.

Peer-reviewed studies document the toxic impact of exposure to violence, including violence to animals, as an ‘adverse childhood experience’ with long-term effects on the developing brain and subsequent poor health outcomes.  A study of animal cruelty offenders matched with a non-offending control group demonstrated that 70% of animal abusers also had criminal records vs. 22% for the control group.

71% of pet owning women in domestic violence shelters in the United States reported that their husband or boyfriend killed, harmed or threatened an animal – “I did this to your dog – you’re next.” 32% reported their children had also hurt or killed animals.

UK animal protection laws have recently been strengthened but it has been a long road because violence towards animals has always been treated as a lesser crime. But 2018 Ministry of Justice figures show that 13 convicted murderers, 22 child rapists and 99 people guilty of child cruelty had also been convicted or cautioned for animal cruelty offences over the previous decade. Hundreds of sex offenders and people convicted of violently attacking others were also found guilty of animal abuse.

In a recent article, investigative journalist Jane Dalton writes that ‘researchers from Teesside University talked to teenagers in Romania, finding that nearly nine in 10 – a staggering 86.3 per cent – thought it was “normal” to see homeless animals being abused or killed. The teenagers were also found to be more likely than youngsters in Germany, a control group, to later self-harm or have suicidal tendencies. As children, nearly all of those questioned had witnessed street animals being caught in a noose, poisoned or hanged.’ ‘Romania was a case study that demonstrated what is known as “the link”,’ writes Dalton, ‘but the psychology of graduating from witnessing or suffering aggression to enacting it is a worldwide phenomenon. ‘

What is the solution to this growing epidemic of abuse? Tougher laws will certainly act as a deterrent if they are enforced, but we need to get to the source of the problem and prevent violence right from the beginning. This starts with helping and teaching children from all backgrounds the value of compassion. In Atlanta the W-Underdogs does exactly that, and stands as a community-based organization that is uniquely positioned to help address the social determinants of poverty by helping children stay in school, develop tangible trade and business skills, and learn to compassionately care for both people and animals.

Learning from animals and community leaders inspires and empowers children to change their communities through local service and activism, while giving them the opportunity to make positive choices. W-Underdogs programs and activities teach kids that compassion and empathy toward animals and people can stop the cycle of abuse. By helping animals and people in need, W-Underdogs participants build their own self-esteem and confidence and help create safer spaces and communities.

W-Underdogs kids also help build and collect doghouses to provide shelter for dogs of less fortunate families as well as helping in the rescue, socialization and rehoming of homeless animals. The W-Underdogs dog food pantry provides thousands of pounds of pet food annually to families in need and educates communities about the importance of spaying/neutering, vet care, and protecting animals from harsh conditions and violence.

Two more program components, Reduce/Reuse/Repurpose/Recycle and Healthy Food Choices for You and Your Community create lasting values around growing one’s own food supply, understanding the environmental impact of food waste and how the reduction of waste can affect a person’s body, mind, and soul. The program provides healthy snacks and meals to kids while teaching responsibility and the power of choice.

The W-Underdogs team recognizes that the three keys to intrinsic motivation are autonomy, mastery and purpose. Autonomy gives youth a sense of control over the direction they want to go in life, mastery gives them the skills to do so and purpose gives them the hope they need to pursue their dreams. Teaching children compassion towards animals and helping them find their purpose, empowers them and gives them a chance to make a positive impact, not just in their local communities, but around the world.

The W-Underdogs slogan is ‘Kids Save Dogs. Dogs Save Kids’. These two vulnerable groups support each other and show that love, kindness and compassion can change whole communities even in the toughest of environments.

To learn more about the W-Underdogs program go to www.w-underdogs.org