On March 19th I attended the 25th Genesis Awards.  The Awards are hosted by the Humane Society of the United States and honors ‘outstanding individuals in the major media whose artistry and journalistic integrity have increased public awareness of animal issues.’  This was the second time I had attended and this year It’s Me or the Dog was nominated for Best Reality Series.  The show has been nominated for many different awards but this was a special one because it recognized the contribution that It’s Me or the Dog is making in helping people build more positive relationships with their pets as well as addressing issues such as pet overpopulation and the importance of spay and neuter.

I have spent a lot of time living and working in Los Angeles and even though I am grateful for the experience, the LA lifestyle is not what I ultimately strive for.  To me the issues of helping animals is much more important than any fame that comes with my show, but now and again it is nice to visit and realize that I have come a long way from my dog walking days in Wimbledon.  I am achieving what I always wanted and my heightened exposure allows me to fight for animal causes that I am passionate about. 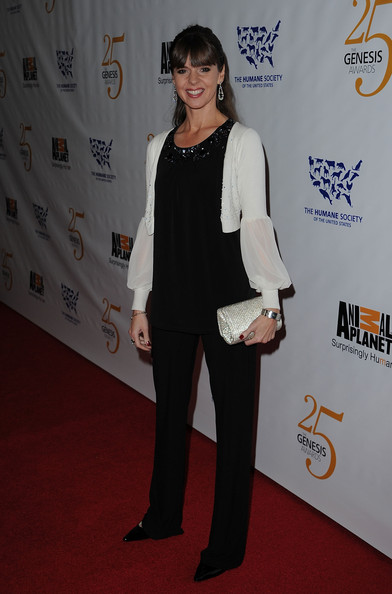 Walking the red carpet is always a unique experience.  After stopping every couple of steps for the mountain of photographers to take your picture, it is time for print, TV, radio and on-line interviews.  You can spend up to half an hour on a red carpet if there are enough people who want to talk to you.  By the end of it my voice was hoarse and my face hurt from smiling so much, but it was great to meet so many people and talk about why events like the Genesis Awards are so important.

The Awards themselves (slightly shorter than the Oscars) are a celebration of how the media has helped to report, expose and support animal issues that affect us all.  The evening opened my eyes even more to the incredible cruelty that animals face.  Some of the footage shown of the horror that many animals suffer at the hands of man was shocking and hard to watch, but I believe animal cruelty, which is still prevalent in so many industries including factory farming and puppy mills, needs to be highlighted in this way.  The sheer scale of suffering is hard to stomach but media is the best way to expose these issues that would otherwise go unchecked.

There is a section of society that mocks those of us who fight for the rights of animals, labeling us vegetarian freaks that go around throwing paint on people who wear fur, but the truth is that most of us are very normal.  I am just one of millions of people battling to protect those that are vulnerable because we have a respect for nature and the animals that we share this planet with.  It is hard to watch such brutality for human gain and I for one will not stand idly by and allow it to happen.  Events like the Genesis Awards focus on change and it is that change that must be celebrated and encouraged.

It’s Me or the Dog did not win the award, but that did not not matter to me because every nominee and winner are fighting for the same end and as the evening drew to a close I was just thankful for being part of a group of like-minded, strong individuals that are working hard to put an end to animal cruelty.

Tags: animal cruelty, Genesis Awards, It's Me or the Dog

2 thoughts on “The Genesis Awards”