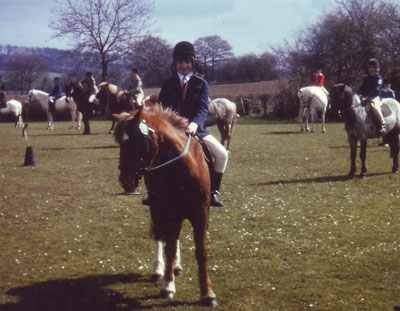 Riding horses as a 6 year-old.

As I watch my daughter and my nieces grow up, I am continually reminded of all the situations kids have to deal with when it comes to establishing and keeping social relationships with their peers.  Friendships come and go, best friends change like the wind and the emotional roller coaster that this causes can be hard to watch, especially when it happens to your child or other kids that you are close to.   I make sure the kids know that if they ever have an issue or concern, they can talk to me and/or go to a teacher that they trust.  It is so important to teach children to communicate their feelings and if I had been taught that lesson when I was young, maybe I would have avoided (or at least been able to mitigate) events that led to the worst two years of my young life.

I was a happy, outgoing child – relatively confident and able to fight my own battles.  I was bullied a little when I was growing up and even though I still remember incidences from when I was 7 years old, I was able to come through the experience relatively easily.  It was only when I turned 13 that I experienced a level of bullying that turned my world upside down and plunged me into a nightmare that I thought I would never get out of.   It all started because of one girl.  I won’t name her, but I remember everything about her, from what she looked like, to what she wore, to how she spoke.  She bullied me relentlessly for two years and made my life a misery.    And it all started because of jealousy.

My bully loved to be the centre of attention.  Even though we went to an all girls’ school, she had a big following of both girls and boys who flocked around her like flies on feces.   She was in the year above me at school and I had nothing to do with her until one of her friends, who happened to be a boy, told her that he liked me.  I suppose I should have been flattered, but I was blissfully unaware of this, until the bully started to make fun of me and say nasty comments as I walked past her in the school hallways.  I couldn’t understand why she was being so nasty and wondered what I had done to offend her. 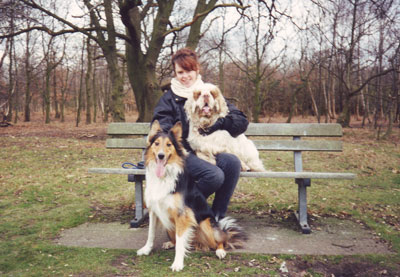 The boys who attended our brother school would finish school before we did and hang around outside our school until we got out.  It was a great social scene and because most of us either walked or cycled to school, we would meet, ride our bikes up to Wimbledon common, and hang out by the pond for an hour before we went home.    We always had a great time and there were never any issues, except for a few broken hearts here and there.  We enjoyed a freedom that a lot of kids don’t get and we were generally well-behaved, save for the odd sneaked puff of a cigarette when we could get our hands on one.

I was not a particularly ‘cool’ teenager.  I didn’t wear great clothes, I didn’t wear make-up and I wasn’t self aware.  I loved acting, walking dogs, riding horses and cycling with my best friend Kate and that was all I really needed to be happy.  I had a vague interest in boys, but at that stage they still weren’t a big deal and I didn’t even know how to flirt.   I was in no way a threat to anyone and certainly not a person to be jealous of, but because I was relatively unaware, I became an easy target.

As the year went by my bully became more confident and the comments became taunts.   The taunts became harsher and more frequent until I was scared of walking through school halls for fear of being jeered at.  I not only endured the taunts from the bully but her followers that also joined in.  Each time I encountered them I suffered personal remarks about the way I looked, what I wore, how immature I was physically and how I spoke.  I started to find notes in my desk that contained unpleasant comments and threats towards me and my family.  Even though I told my closest friends how bad it was getting, none of us, including myself, would dare tell a teacher or my parents, it just wasn’t done in those days.  I kept my head down, endured the taunts and stopped going up to the common.   I became moodier at home but my parents put that down to me being a teenager and never asked me why. 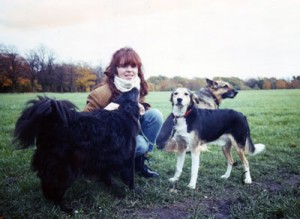 With some of my dog clients on Wimbledon Common.

I remember how proud I was to get a new jacket one day and how good I felt wearing it.  I remember cycling across the common towards home and having the bully and her friends shout at me and make fun of my jacket as I cycled home in tears.  I never wore it again and my mother couldn’t understand why I was being so ungrateful.    I began to retreat into myself, became quieter and more reserved.  I dreaded going to school, cycling on my beloved common and walking the school halls.  Finally even my best friends turned against me, because they were threatened that if they didn’t they would be banished from the group, so I had no one.  The bully had achieved what she set out to do.  She had completely suppressed me until I submitted to her dominance.  She had won.

I don’t know why it happened, but one day the tide turned and overnight the bullying stopped.  I was walking in the village when some of my old friends came up to me, apologized for turning against me and walked me onto the common to face my bully.  The most popular boy in the group told her to leave me alone and that there would be consequences if she didn’t.  I looked at her pinched, angry face and for the first time I met her eyes and held them there.   I felt a power surge through me that made me dizzy and my vision went blurry.   I felt like taking up my fist and plowing it through her to get rid of that awful face that had taunted me for two years.  My body trembled and my mouth went dry, but I did nothing and not a word passed between us, because I know she saw the look on my face and for the first time I saw worry in hers.

Hate is a strong word, especially when it is directed towards a person.   There are few people that I have known in my life, that I could use that word for, but she is one of them.  I hated her then and I will hate her for the rest of my life.  Maybe I am weak to do so and should learn to forgive what she did to me, but I’m not that good a person. 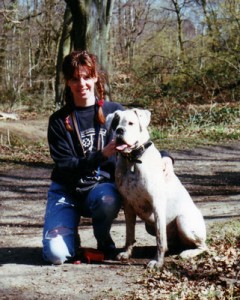 Ahhh the fasion of the 1980's. Ripped jeans on the Common.

From then on I learned to be direct, to tell the truth and to share my feelings with people I could trust.  I learned to fight for the vulnerable, to stand up against cruelty and to champion causes I really believed in.  I continue to do that to this day in my private and public life.   I abhor people who hurt and bully others and will fight for justice.   I despise those who still utilize dominance training methods when teaching dogs to behave.  Jerking, restraining, poking, nudging, hitting, shouting or shocking dogs is just a form of bullying.  It stems from ignorance and a fear of losing control or having an animal seemingly control them.    It makes me so sad to see trainers and dog owners use these methods on their dogs, thinking that what they are doing is right and good, when they are oblivious to the signals that their dogs are giving them, signals that the dogs are using to try and communicate to their bullies to stop.   I see so many dogs that have given up like I did.  They behave and follow their masters and do what they are told and their masters are happier that they have such “obedient” dogs.  What the masters don’t know is that their dogs are only following them because they have been suppressed and dominated, and they, like me, fear the consequences if they fight back.

At university I learned to empower myself, became a guardian angel on the London Tube trains to help people in distress, worked in shelters to help scared and abandoned animals and became a personal security guard to defend others.   Although I didn’t make personal security my career, I learned so much about myself and what I was capable of.  I learned to think with my head and not my fist, respect everyone and protect those that couldn’t protect themselves.

Even though I might come across as hard on my television show, every client knows that I am going to work for them and their dog 100%.   I am a compassionate person and even though a client might not like to hear what I have to tell them, I communicate with sincerity and a desire to help improve lives that have gone awry.     I am a strong woman now, but I never forget what I went through to get there and that makes me continue to fight against those that bully people or animals.   I don’t know where my bully is now, nor do I care because she is dead to me.  But she did teach me an important lesson.   She taught me to stand up for myself in a non-violent way and to fight for what I believe in.  She made me see that a bully is not a powerful, confident person at all, but an insecure and weak person that manipulates and controls others to support their own insecurities.    Had I known this from the start, things would have been different, but I make very sure that my daughter, her friends and my nieces  know, so that they will never have to go through an experience like mine.