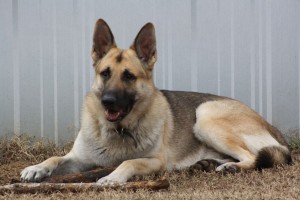 As the contributions of military working dogs are being recognized for their accomplishments around the globe, American Humane Association proudly announced today that RIN TIN TIN, possibly the most recognized dog in the world, has become its first national spokesdog. RIN TIN TIN will serve as a national ambassador for the American Humane Association’s Hero Dog Awards™. Nominations for the Hero Dog Awards are now open at www.herodogawards.org.

RIN TIN TIN was rescued as a pup from a battlefield in 1918 France during World War I. He was brought to the United States after the war and the training program led by his son, RIN TIN TIN III, served as the model to help create the US Military Working Dog training program at Camp Hahn in California during 1939. “The long and accomplished history of the RIN TIN TIN line dogs serving as war heroes, animal actors in films and television and even as a search and recovery dog at the Pentagon after the attacks of 9/11, continues today as the current RIN TIN TIN is a member of the elite search dog recovery unit in Arkansas,” according to Daphne Hereford, President of RIN TIN TIN, INCORPORATED. “We’re proud to join with American Humane Association in recognition of the powerful relationship between dogs and people as celebrated by the Hero Dog Awards.”