Reports of Dog Genocide in Sochi 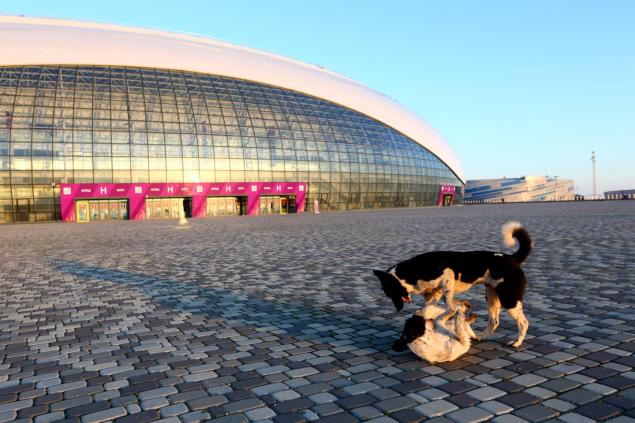 I absolutely love the Winter Olympics. Maybe even more than the more traditional Summer Olympics. I'm not totally sure why, but to me, things like downhill skiing, bobsled and figure skating are so exciting to watch. Maybe it's also because it's only every 4 years that these winter sports get our full attention, while track & field (and other sports like volleyball, basketball and wrestling) get pretty regular billing.

With the opening ceremonies in Sochi just a couple days away, I'd normally be getting geared up for all things snow and ice, but sadly there have been so many disquieting reports recently about the upcoming Games ranging from eyebrow-raising to downright appalling that I'm really conflicted about these Olympics.

We've all heard about the strange choice to stage the Games in an area known more for its sunny beach holidays than snow sports, and there have been reports of massive corruption and waste in terms of the building of the Olympic venues (not that surprising or particularly unique to these Games). Of course Putin's controversial stance on gay rights is rightfully a major storyline, too. But the issue with these Olympics that is really causing me problem is... (surprise) dogs.

Reports are surfacing that just days before the Olympic torch is to be lit signifying the hope of a peaceful world community and enlightened relationships among people of all races, nationalities, colors and sizes, authorities in Sochi have hired a 'pest control' firm to exterminate the apparently huge numbers of stray dogs in the area. This is sickening.

Most people know I rail against many animal-related issues that could be avoided with the addition of common sense and a little bit of effort, and pet overpopulation is chief among these campaigns. It's not surprising that Russia in general and Sochi in particular have stray dog problems, and I'd like to think that their response to simply kill these dogs like insects and sweep them away is shocking. But it's not. It is absolutely horrifying, but did you expect anything less from these guys?

Without getting too political, it's situations like this that reiterate the importance of a vital and engaged private sector who feels entitled and allowed to tackle a problem such as massive pet overpopulation on their own. Living in Atlanta, I'm well aware of the many critics of the 1996 Olympics held here, but as someone involved in the animal rescue scene here, I can guarantee you that if we had been presented with a stray dog problem on the scale of what's going on in Sochi, the legion of rescue groups that surround this city would have stepped in, demanded that the authorities back off, succeeded, and handled the problem humanely and effectively.

It's devastating to admit, but I fear the hour is too late and the Russian setting too impenetrable to even hope for a better outcome for these poor dogs. Sadly, I also don't know what might be done in the future to avoid this situation other than to hope that Olympic Games are only awarded to cities and countries that are more progressive in their thinking regarding animal welfare and pet health. But that's a long shot - just look at recent Olympic history.

So it's just very,  very sad. What should be an escapists dream of two weeks now has yet another reason to keep people like me at arm's length.