The Christmas Puppy.  We’ve all heard it before, and most of us know someone who has actually done it.  Despite the best efforts of humane societies and shelters around the world, the holiday season is still among the busiest times of the year in terms of people adding new pets to their household.  And regardless of where people get their cuddly new friend, the sad fact is that January and February are often the busiest time of year for shelters taking back recently-adopted pets whose honeymoon period with their new owners has ended just as the holiday decorations are packed away for another year.

If you’re considering adding a pet to your life over the holidays, please make sure you’re not just caught up in the festivities and optimism that comes with the holiday season and the impending new year.  But for those who are intent on bringing a new furry friend into the fold, I thought now would be a good time to discuss this age old question:  When is the right time to add a new pet to the family? 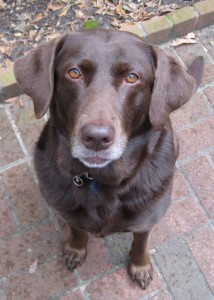 Dogs are pack animals and don’t do well in social isolation so I often wondered when I got my Labrador Sadie if she was happy being an only dog.   I knew that she loved being with my family and me and thrived on the attention we gave her but she always looked so sad when we left her at home by herself that I worried about her being lonely.  She was not highly social with other dogs but once she got to know them she seemed happy enough in their company.   When I introduced Sadie into the home we also had a cat, Angelica, and even though the two tolerated each other, it wasn’t exactly a match made in heaven.

I was often asked if I thought it was alright to have just one dog and would always answer that as long as the only dog was given plenty of human attention and stimulation and not left on their own for long hours during the day, it was ok.  I still believe this is the case, but the question always made me wonder if I was doing the right thing.  If I did bring another dog into the home I wanted to make sure that I was doing it for the right reasons and not because I felt guilty.   I also knew that introducing a dog into the household had been a little stressful for my cat to begin with, and even though she relaxed pretty quickly in Sadie’s presence, I didn’t want to put her through any more stress by adding another dog into the mix.

My work introduces me to a lot of families that have multi-dog households so that their dogs have playmates.  I also meet a lot of people that ‘collect’ dogs and cats because they crave the attention their animals give them.  As a responsible pet owner I cautioned that though we may feel the need to love and care for every animal that comes along, it may not always result in what is best for the pet.  Of course a lot of these types of situations involved people who volunteered at rescue shelters and saw the immense need for more forever homes, but even then it was not always in the best interest of the animals they adopted.  Existing dogs and cats are not able to choose their new ‘brothers and sisters’ and sometimes the stress these animals experienced trying to get along with each other did not make for a happy or calm environment. 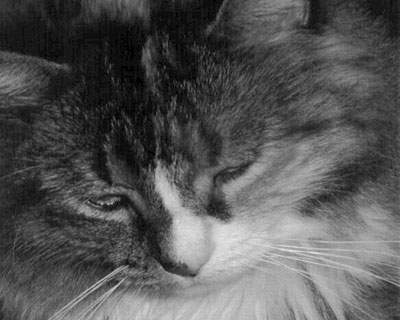 When Angelica passed away we started thinking about getting a second dog and I knew that whoever we added, Sadie also had to have a say.  If we were going to get another dog, should it be a male or female?  Inter-bitch aggression is very common, as are fights between competing males, and while dogs of the same sex can co-habit peacefully, it is often better to mix the sexes up.  It is also advisable that the second dog is either close in age or temperament to the existing dog, making sure their energy levels match.  If a puppy is brought into a home with an established older dog, every effort must be made to keep the puppy’s desire to play with the older dog to a minimum.  In some cases a younger dog will breathe new life into an older one, but age gaps can also be the cause of major irritations.

At the end of the day, the decision was made for us when my daughter and I spied Jasmine in our local rescue shelter.  The tiny six month old Chihuahua mix was perhaps not the best physical match for a 75 pound chocolate Labrador but the two hit it off almost immediately. Initial introductions were made on neutral territory with both dogs on loose leashes, so that they had the ability to interact without the frustration of being held too tightly and once the initial meeting went well, both dogs were allowed to interact off leash in a safe area, giving them freedom to form a relationship. 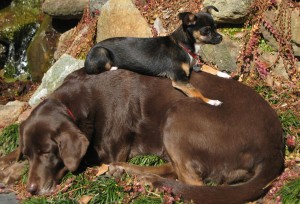 Established dogs can become jealous when too much attention is given to the new addition so I made sure that both dogs got equal attention as well as having quality one-on-one time with us.  Feeding the dogs separately for the first couple of weeks ensured that there were no fights over food bowls, and high value chews or toys were given to the dogs in separate rooms so that there was no fighting over valuable resources.  We rewarded Sadie when she behaved well around Jasmine and walked both dogs together to help the bonding process.

Now, of course, I can’t remember what life was like with just one dog.  Jasmine has made all our lives so much richer, including Sadie’s.  The two play, eat, and hang out with each other, sharing their toys and sleeping close together.  Jasmine loves to rest on Sadie’s back and Sadie loves the closeness of having her near.  I have noticed a pep in Sadie’s step since Jasmine came and the eight year age difference does not seem to bother either of them.   It might have taken a little while to get this point but adding a second dog was the best decision our family ever made.

I’m often asked ‘how many dogs is it OK to own?’  The short answer is that it depends on your specific situation, but I am a firm believer that adding additional pets to an only-pet household can often create far more net benefits than problems, provided you do it responsibly and take care to keep all of the animals’ best interests at heart.  You can find a lot of great information about adding more pets to your household responsibly via my friends at Pets Add Life (www.petsaddlife.org).