I don’t know why, but October always seems to be one of the busiest months of the year for me. It’s also one of the most fun and rewarding, and this October has not let me down!

Between my filming schedule, the Hero Dog Awards in LA, my trip to Savannah for a school and jail dog program visit, a cat training session in Denver for the winner of the InFURvention contest, the APDT conference, ongoing development of new projects, my work with VSPDT, and of course being a wife and mom, it’s been a pretty full few weeks.

I’m not one of those people who is very good at sitting still, so I was very glad to have a full plate, but it’s also great to be home for a few days as we gear up for Halloween with my daughter and a visit from my mother. 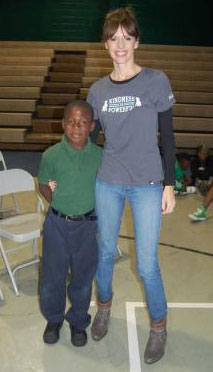 To start the month off, I was honored to have been asked to go to beautiful Savannah, Georgia to speak to an entire school full of kids eager to learn about dogs and how to be safe around them. You may have heard me discuss the case of Javon Roberson, a sweet, courageous young boy who was the unfortunate victim of a vicious dog attack over a year ago. The incident left him severely scarred on his face and psyche, and I had the privilege of meeting him during our first National Dog Bite Prevention and Awareness Conference in Atlanta last May. His advocate, Cheryl Labon, brought him to Atlanta to discuss the importance of dog bite prevention education, and I was struck by his bravery as he opened himself and his story up so that other kids might not have to go through the same ordeal. I had the unique opportunity of talking about dog safety to Javon’s school, and had a great time talking dog with some truly wonderful kids.

Aside from the obviously powerful narrative that Javon provides, one of the most enriching aspects of my recent visit to Savannah, however, was in witnessing the evolution his advocate, Ms. Labon, underwent regarding her position on dog safety issues. While I am a firm opponent of Breed-Specific Legislation (BSL) due to its inefficiencies and tendency to focus on the wrong end of the leash, I am aware that many still do not share my views. After witnessing the effect Javon’s attack had on him, she developed an all-too-common conclusion that the specific breed of dog that attacked him (pit bulls) should be limited, controlled and reduced in an effort to lower the likelihood of dog attacks in the future.

As we now know, such BSL does not actually reduce dog bite statistics – they’ve actually risen in almost every municipality where BSL has been introduced. To Ms. Labon’s credit, after over a year of concerted effort to institute and lobby for BSL in and around Savannah in Javon’s name, she showed tremendous courage and gained an admirer in me when she announced during my school visit that she had changed her mind and would immediately stop efforts to institute BSL on a local level. This type of willingness to listen to, appreciate and ultimately respect an alternative point of view on such an emotional and contentious issue is exactly what’s needed in the fight against BSL all over the world.

While I was in Savannah, I also had the opportunity to tour the fantastic jail dog program for Chatham County, Operation New Hope. Along with my excellent Savannah-based VSPDT trainer Kevin Ray, I was treated to a fascinating tour of the program at the jail by the lovely Sgt. Brooks, and came away very impressed by the work being done both by the correctional staff and the inmates with the dogs. 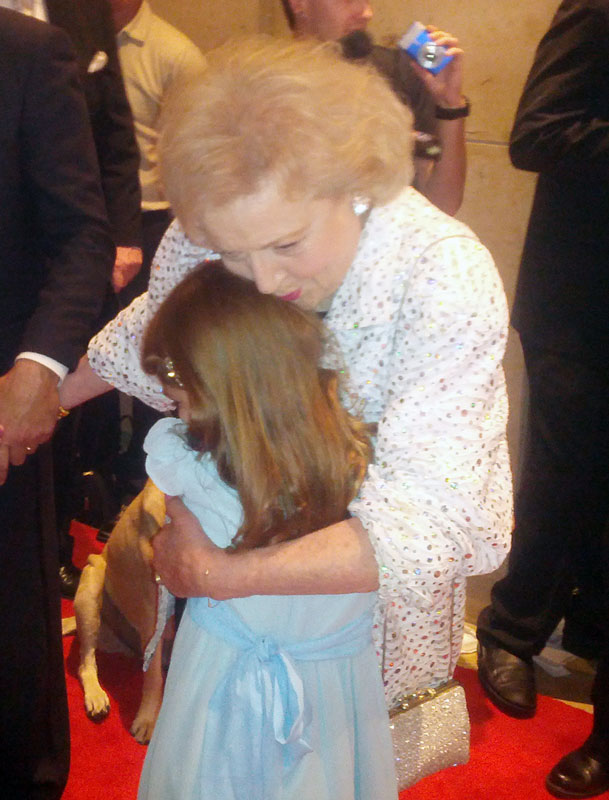 Victoria's daughter gets a big hug from Betty White on the red carpet at the 2012 Hero Dog Awards.

Later that week I headed off to Los Angeles with my family to attend the 2nd annual Hero Dog Awards presented by the American Humane Association. This is one of my favorite events of the year, as the honorees of the gala event held at the Beverly Hilton are truly the dogs who have made such a difference in the lives of others. I was honored to join an all-star roster of human supporters such as Betty White, Kristen Chenoweth, NCIS’ Pauley Perrette, Jewel, True Blood’s Michelle Forbes and many more in presenting awards and tributes throughout the evening. I even got to hold a real Olympic gold medal courtesy of my co-presenter, swimmer Ricky Berens. The human highlight of the night, however, was in being able to share such a moving and beautiful experience with my 8-year old daughter who joined me on the red carpet for interviews and photos before the awards show started. The Hero Dog Awards will be broadcast on November 8 at 8pm ET/PT on the Hallmark Channel – be sure to tune in and watch the amazing stories. Check out my photo album from the Hero Dog Awards.

While I was in LA I also had the chance to attend the kickoff event for Fido Friendly magazine’s Get Your Licks on Route 66 event. This nationwide initiative works with shelters all over the country to encourage adoption, and I am honored to serve as the official spokesperson for this year’s tour. It’s always great to connect with those on the front lines of animal rescue and adoption, and Jan and the team at the LA Animal Services East Valley Shelter were wonderful hosts to me, Susan Sims (Fido Friendly) and everyone who attended the daylong event.

After LA it was off to Denver to work with the winner of Banfield’s InFURvention campaign to help encourage cat owners to get their pets to the vets for regular checkups. A big deterrent for many cat owners is the battle royale that sometimes ensues when trying to coerce kitty into the carrier, so I helped a lovely family find positive solutions to getting their furry friend into the cat carrier. 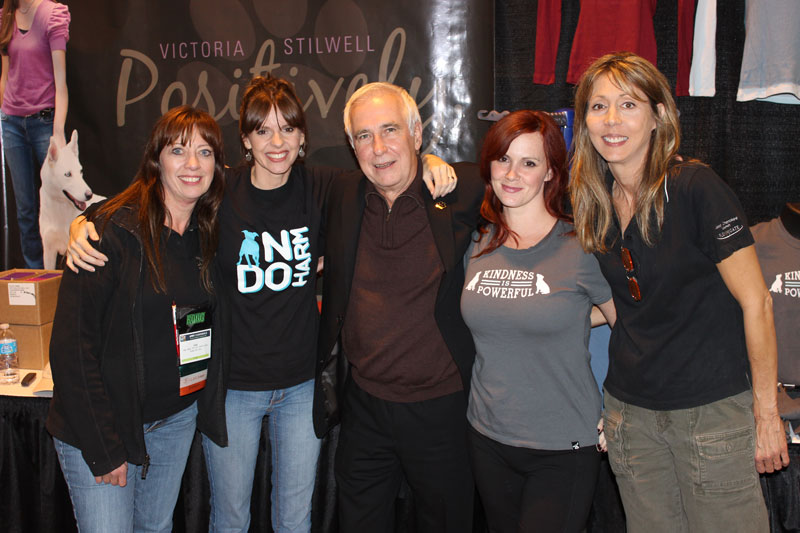 Finally, I just returned from Cincinnati where I attended the annual Association of Pet Dog Trainers conference on behalf of Victoria Stilwell Positively Dog Training (VSPDT). I love going to this conference, in part because it’s so great seeing so many respected peers and colleagues in the pet behavior industry, but also because I learn so much every year. Behavioral science is always evolving, and we’re constantly figuring out new ways of more effectively communicating with our dogs and promoting positive training ideas at the expense of traditional, punitive training methods. So I sit in on lecture and seminars from some of the world’s leading trainers and behavioral scientists and soak up as much as I can. FYI, any trainer who claims to have it all figured out and says they don’t need to learn any more is someone to avoid at all costs – we all always have more to learn, and I love it. Check out my APDT Conference photo album.

APDT is also a great chance for me to hang out with my amazing team of VSPDT trainers from all over the world. These people are truly the cream of the crop, and some of the best trainers you’ll find anywhere. We get to share ideas, connect on future projects, and generally have an awesome time building what I truly believe is the most welcoming, engaging, supportive and inspirational group of dog trainers in the world. They’re the best, and to find one near you, visit www.positively.com/trainers. For more info on how you can become a VSPDT, visit www.vspdt.com.