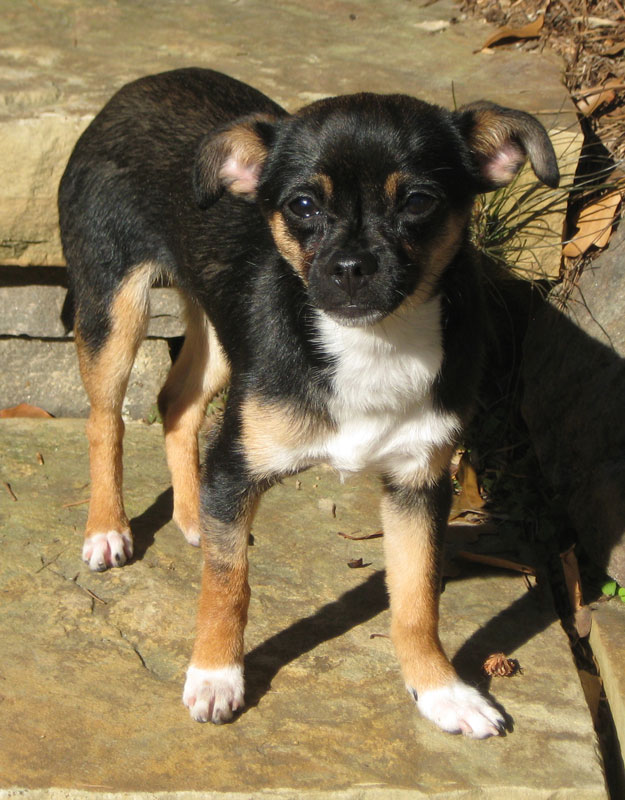 We have a new foster pup staying with us at the moment – a six month old Chihuahua/min pin mix named Jasmine.  She is a joyful soul who loves to play fetch, wrestle with toys and snuggle up when it is time for a nap.  She loves her big foster sister Sadie and likes nothing better than to climb on top of her back to sleep or nestle by her side.  Sadie has accepted Jasmine into the household and I have noticed that there is a ‘pep’ in Sadie’s step as if some of the younger dog’s energy is flowing into her.  My daughter loves Jasmine and already the two enjoy a relationship that is lovely for a parent to see.  Sadie in turn has been enjoying more attention from all of us so that she doesn’t resent the new addition. 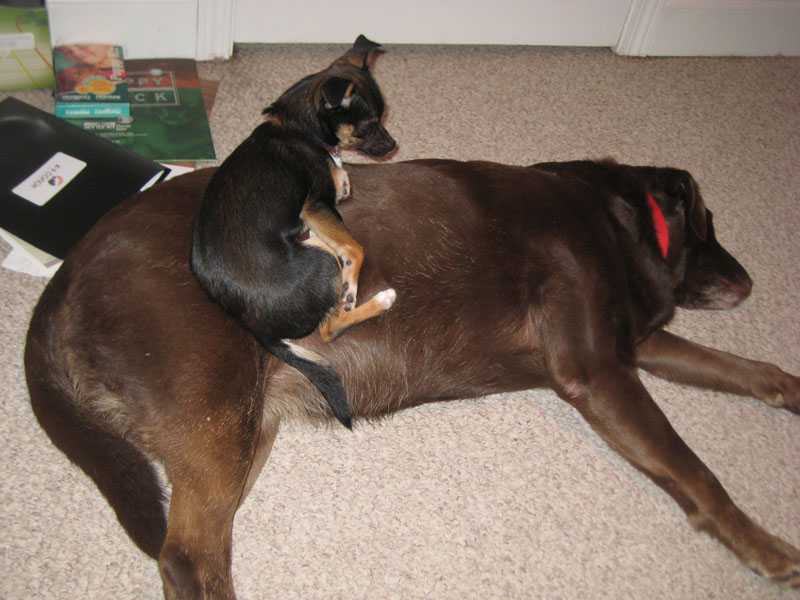 My husband, on the other hand, is having a harder time connecting with Jasmine.   Wherever she lived previously (she was delivered to the local shelter in a box by two men who said they didn’t want her) she was not housetrained, which means she is now on a toileting schedule.  For anyone who has experienced toilet training a puppy, it is a time consuming process, but we have been pretty successful so far.  That is until my husband takes over.  Though he would argue that he's just unluckier than I am, I have a suspicion that he is not quite as diligent with the process as I am.  Regardless of the reason why, there have been more accidents on his watch than on mine.  It is also pretty fair to say that he is not as consistent as I am when it comes to walking the dogs (sorry, honey).  The last walk he took them on was an abject failure, as it was freezing cold and no one wanted to be outside anyway (including the dogs).  Add to this the fact that although he is a very confident, enlightened man with modern sensibilities, he was not particularly overjoyed at having to use a fuscia leash to walk a tiny dog that was wearing a pink striped sweater to keep warm.  Despite all this, where do I find him at the end of the day?  On the sofa with the little dog asleep on his chest and a big brown one at his side, so however much he grizzles about her, I’ve noticed a nice bond developing. 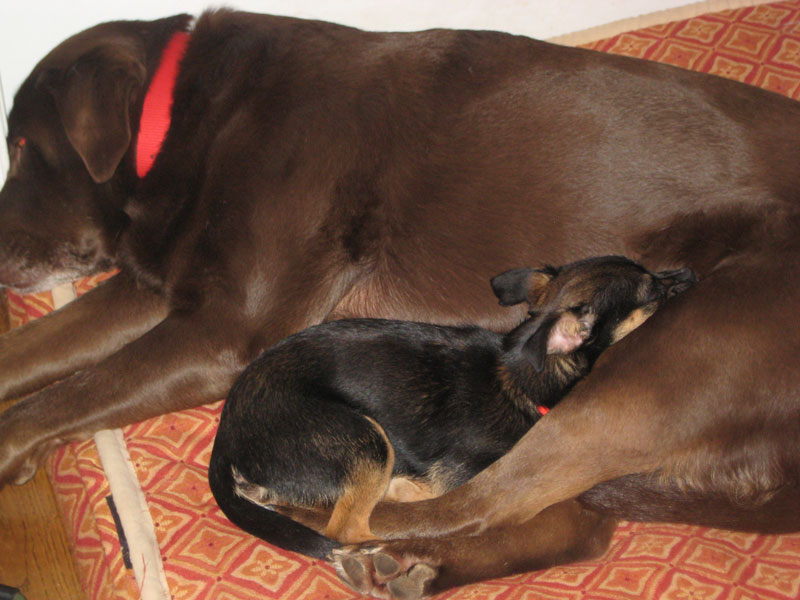 My husband was on dog watch for the day as I was out rescuing a chained pitbull, and he went to take a shower.  He put Jasmine in her crate for safety as he didn’t want her to walk around the house unsupervised.  On coming out of the shower he noticed a rather pungent smell and his worst fears were realized.  Jasmine had pooped in the crate.  Keeping his calm he cleaned the crate up and went to work in his office.  Jasmine snuggled up on the chair next to him and all was quiet.  Then the heaving started.  Jasmine began to make loud retching noises and as my husband desperately looked around for something to catch what he knew was coming out of her mouth, she vomited.  Fortunately he had cupped his hand under her mouth and caught most of it in his palm.  Cursing quietly he looked down at the mess to see what had made her sick.  In the palm of his hand lay a nicely rounded ball of poop, her own poop that she had obviously eaten while she was in the crate waiting for him to return from the shower.

The best relationships are born out of travesty, enduring hard times together and battling through.  My husband is a very kind man and loves dogs, working tirelessly with me to help dogs around the world, but sometimes, like many people do when raising a pup, he loses it.  He likes Jasmine, but there is still room for growth and it is a lot for him to transfer a little of the profound love he has for our lab Sadie onto a peeing, poop eating, vomiting Chihuahua.