We all know that dogs do amazing things, but check out this very active dog, making a difference for so many in the surf! 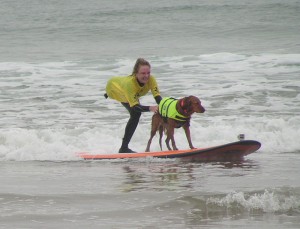 Ricochet was slated to be a service dog, but due to her propensity to chase birds, she had to be released from that role. Because she lives in Southern California & is a surfing dog, her title went from Service dog to SURFice dog. She's the only known dog in the world that surfs with special needs kids & people with disabilities for therapeutic purposes. She still provides a service to people with disabilities... it's just in a non-conventional way! She has a video about her Journey on YouTube titled "From service dog to SURFice dog" that went viral & has over 3.2 million views. People all over the world are touched on many different levels, bringing them to tears. Because the video received so much attention, Ricochet started raising funds and awareness for human/animal causes and has raised more than $75,000 in the last 17 months. When her Facebook page reached more than 20,000 incredibly supportive fans, she wanted to help even more people/animals and started "Raise Awareness Wednesdays.” She's an internationally renowned, award winning surf dog at the center of media attention, who has become an inspirational phenomenon, philanthropic role model, internet sensation, fundraising marvel, community advocate, goodwill ambassador, and muse to millions! She's been featured in hundreds of media sources all over the world showcasing and raising awareness for her causes. She is the epitome of an ordinary dog with an extra-ordinary spirit!

For more information or to nominate your hero dog, visit the Hero Dog Awards official site!

Read more about Ricochet on the Hero Dog Awards blog.