Here is the amazing story of a little dog that performed an enormous deed; he saved the life of his owner. Buster is an Emerging Hero with a large tale to tell - well, his owner tells it for him. 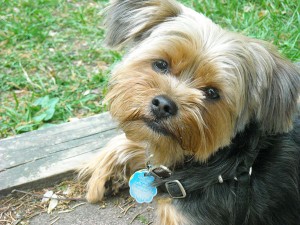 Our Hero Buster came into our lives when my husband started a job that required him to travel. I looked for a puppy and found the best friend ever. Soon after Buster came into our lives my husband became very sick. After multiple hospital stays and surgeries, he came home from the hospital. Buster was 10 months old at the time. One night, my husband was sleeping downstairs in our living room; he was unable to use the stairs after his operation. Buster and I were sleeping upstairs and we were having a terrible ice storm that night. Buster woke me up barking. That wasn't like him. He's not a barker. I thought he may have heard a snow plow outside, but I realized he wasn't barking at the window, he was barking at the bedroom doorway. I decided since I was awake I would check on my husband. It was a good thing I did; when we got downstairs my husband was unconscious on the floor. He had gotten up and blacked out. He hit his face on a piece of furniture and cut his face. When I got him to the hospital his blood pressure was 55/30. The doctors said that if I hadn't found him when I did he very likely would have stroked out and possibly died. If it wasn't for Buster I never would have gone down to check on my husband, I didn't hear him fall but Buster did. My husband thanks Buster every day for saving his life. He's my husband’s HERO!!

For more information or to nominate your hero dog, visit the Hero Dog Awards official site!