Fears Are Not Facts 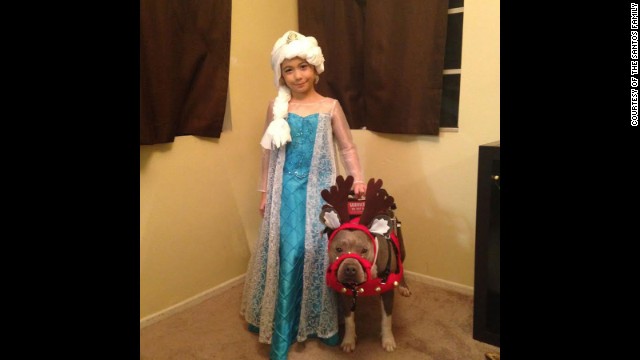 I was saddened, but not surprised, to hear the story of a mall Santa turning away an autistic child because he was afraid of her service dog, a pit bull.

Abcde Santos and her service dog, Pup-cake, waited in line for over half an hour for a chance to meet Santa. Children on the autism spectrum often become overwhelmed by lights and sounds, especially when waiting. But Abcde's brave and impressive wait was met with disappointment when Santa not only refused to see her and Pup-cake because "those dogs eat people", but wouldn't even see her after Pup-cake was removed from the building. Abcde's mom says he then refused to see her because "they support those dogs."

While it's all well and good that the mall staff and property management were quick to rectify the situation, firing the uncooperative Santa and offering Abcde and Pup-cake a private visit with a kinder Santa, there is still so much more to be learned from this incident.

The media has demonized pit bulls to such an extent that fears are now facts in the eyes of the general public. Some of the most pervasive myths include that pit bulls suddenly "snap" and attack without warning, that they have a "locking jaw" mechanism that allows them to bite and hold without letting go, and that they are "unpredictable"--all of which are based on fears, not facts.

I encourage you to read my article covering The Truth About Pit Bulls. It's time for the public to be educated on the facts about pit bulls, instead of making hurtful decisions based on unfounded fears.

5 thoughts on “Fears Are Not Facts”