“Sit! Sit! Sit!” Have you ever asked your dog to ‘sit’ and when she does not respond you repeat the cue again and again, getting louder and louder each time you say it? If you think she hasn’t heard you or she is being stubborn by not responding, you are not alone. “Sit! Sit! Sit!” seems to have become a very popular cue, but by repeating the word you are actually teaching your dog a delayed sit. Instead of your dog sitting the first time you ask her to, the vocal cue has now become ‘sit, sit, sit’ and this is not usually a problem until you are in a situation that requires your dog to respond immediately. 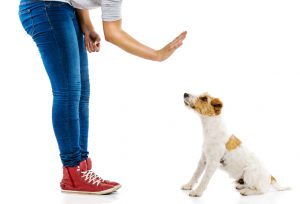 Vocal and physical cues are the perfect way to build up a language of communication with your dog, but a lot can get lost in translation and even simple cues and signals can be misinterpreted.

Speaking dog is all about making it easier for your dog to understand you as well as taking the time to understand your dog. It begins by creating a bond through play, having fun and making sure you and your dog have good experiences together, while vocal and physical language can be used to bridge the human/canine divide.

Some dogs find understanding human language a lot harder than others. If your dog is having difficulty responding to your cues, try changing how you teach her. Even though most dogs are good at following human communicative gestures, for example, your dog might not understand what your pointed finger means.  However, if you say your dog’s name, look at her and then look towards where you are pointing, she is more likely to comprehend what you want her to do.

People are too quick to label their dogs’ lack of compliance as the dog being disobedient, stubborn or stupid, but in reality most dogs are either too distracted, do not feel comfortable doing the behavior in a particular situation or just do not know how. You might have taught your dog to ‘sit’ in the home, for example, but this does not mean she will generalize that behavior to other environments. You need to teach her the same cue in as many different environments as you can, so the cue and response become fluent regardless of where she is.

Even though dogs respond well to vocal cues, using your body to communicate is very effective.  Active hand and body signals are cues that can be paired with actions and behaviors, while passive behavior, such as simply turning your back and ignoring your dog’s unwanted behavior, can be more effective than shouting and yelling at her when she is doing something you don’t like, as long as your dog is not trying to tell you something important. Ignoring behavior can be detrimental to your dog if she is anxious, and what might look like demanding, obnoxious behavior might actually be something very different.

Your personality could have a dramatic effect on your dog’s behavior. Because dogs have adapted to read human signals, they are extremely sensitive to our attentional and emotional states. The more extroverted you are, the more attentive your dog is likely to be, but if you have a more introverted personality that inhibits your communicative abilities, your dog might struggle to understand you.

Some studies have shown that people who are less confident and less independent minded have dogs with more behavioral problems. People that are shy, anxious, tense, neurotic or aggressive may also induce nervousness, anxiety and aggression in their dogs. Neurotic or lazy owners tend to have dogs that are less responsive, while conscientious handlers have dogs that are easier to teach. Of course these studies are looking at how people with different personalities respond to their dogs and vice versa, but environment also plays a large part. There might be a tendency for dogs to reflect or be affected by the personalities of their owners, but that depends on how sensitive each individual dog is to their owner’s changing emotional states.

Whatever your personality, be clear with the gestures and vocal cues that you use with your dog. Talk to her all you like when you are just having a conversation with her, because even though she might not understand what you are saying, she will certainly recognize the tone and pitch of your voice. However when you are asking her to respond to a vocal cue, use a simple cue word to pair with an action, which will make it easier for her to understand what you need her to do.

Some gestures that mean one thing to a person might be interpreted completely different by a dog, especially if that person is a stranger. Hugging, bending over to greet, petting a dog on the head, sustaining eye contact and kissing can all be threatening if the dog does not enjoy close social contact. Greeting a new dog by allowing her to come into your space, smelling your hand and only petting her if she invites you to, will help her become a lot more comfortable in your presence. 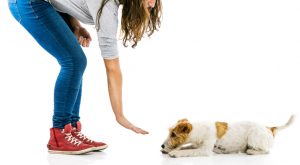 Most dogs respond well to vocal and physical gestures but which one is more effective? Do dogs respond better to visual cues versus the spoken word?  A team of researchers from the University of Naples tried to answer that question by training thirteen dogs to retrieve three named objects using a vocal cue or with a pointing gesture. It was important that the dogs responded equally well to a visual or vocal cue and only nine out of the thirteen dogs could be successfully trained with both and go on to final testing.

Two objects were placed two meters apart across the room. Eight trials were performed using verbal cues only and eight with visual cues. A further eight tests used both verbal and visual cues but were contradictory. If one of the objects was a bottle and the other was a piece of wood, the trainer would say the word ‘bottle’ but point to the piece of wood. The stronger and more effective the cue, the more compliant the dogs would be.

Interestingly the dogs responded equally well to both visual and verbal cues, but when the word and signal were used together, the dogs responded much faster. In the most important last contradictory test, however, seven out of nine dogs chose to follow the visual pointing cue. Two dogs randomly chose to retrieve either the object verbally indicated or the object pointed at equally often, but none of the dogs showed a significant preference for the spoken cue over the pointing gesture. This research is the latest in a series of studies that show similar results. Dogs respond well to verbal and physical cues but visual signals seem to be more effective, so be aware of how your dog responds to your body language and think about what you are doing when you issue a verbal cue. Your dog might not be responding to the verbal cue at all, but is in fact being cued by a change in your body that happens each time you say that particular cue. I have always said dogs watch us more than they listen to us and it would seem that this is certainly the case when we ask them to do something.