Home >> Victoria's Blog >> A Heartwarming Tale in the Winter Cold

A Heartwarming Tale in the Winter Cold

During a cold spell in Atlanta, Georgia, when the whole city shut down and no one could go out for a week, we rescued a dog.  For those of you who do not live in Atlanta – this was how crazy it got.  We only had about five inches of snow, but what made the roads so dangerous was the sheet of ice that developed on top of the snow from the freezing rain that fell afterwards.  With temperatures plummeting to below zero, the roads were like ice rinks and people that ventured out in their cars were risking their lives to do so.  With only eight snow plows for a city of five million people, the city shut down.  Conditions were so bad that every school closed for a week, which made for many happy children.  In a way the snow was a blessing because there was nothing to do except stay inside with family and enjoy the time together.  My daughter was overjoyed to be off school and we made the most of it, sledding, building snow men, and watching movies.  It was also a special time because a few days into the big freeze, Ben came into our lives. 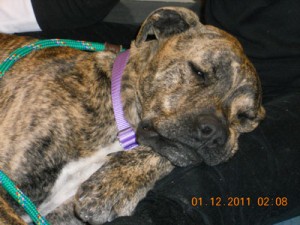 I had heard through a friend of mine that a large, male, brindle-colored pit/mastiff mix was wandering around their neighborhood in the freezing cold.  He was thin and nervous and even though neighbors had been trying for a week to catch him, he would skulk away when approached and not let anyone get close to him.  Thankfully one of the neighbors had provided a bed for him on their back porch and was feeding him two large meals a day, but even with all this kindness, he resisted all attempts to be captured.  When the snow and ice fell and the temperatures plummeted to dangerous levels, the dog would stand shivering in the cold, too scared to go in a house or let anyone approach him.  The neighbors were worried that the cold would kill him.  He was still eating but did not look well and was limping from a foot injury. The snow and ice had closed down animal control so there was no one to help rescue him. Things were beginning to look very bleak.

Thankfully the area where the dog was located was not too far away, so I got in my car and drove carefully to the road where the dog had last been seen.  As I arrived I caught sight of him limping into the undergrowth, but as soon as I switched off my engine he was gone.  As I slid over to where he had been, trying desperately to keep myself upright on the ice, I saw a trail of blood going off into the trees.  His paw had obviously been damaged in some way, probably cut on the ice, which was so sharp and thick it was like walking on glass.

The homeowner who had been feeding the dog welcomed me into her house and showed me where he had been sleeping and eating.  He came every night and several times during the day to eat warm food and sleep on the comfortable, yet cold bed that the neighbor had put out on the floor of their outdoor porch.  As we were talking, I saw out of the corner of my eye a tall, gangly dog emerge from the woods and walk to the porch.  He was skin and bones and was obviously hungry.  He spied us looking at him through the window and barked at us as he backed away.  Armed with a bowl of warmed up cat food (I do not recommend feeding cat food to a dog, but it is one of the smells and tastes that dogs cannot resist and is therefore the best kind of food to use if you want to catch a stray), I went out onto the porch and waited.  I could see his nose twitch as he caught the smell of the food and slowly he edged towards me, never taking his eyes off me as he approached.  I stayed still and reached out my arm with the bowl extended towards him.  He came right up to the bowl and started eating suspiciously but as soon as I made even the slightest move, he darted away again.  This was going to take longer than I had first anticipated. 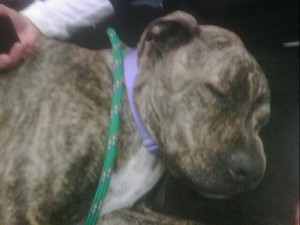 My friend Laura Janssen, Director of Animal Cruelty Investigations and Cruelty Prevention came to help me catch the dog armed with a humane trap that we set that up for the night.  Surely this would be the answer and we could put an end to his misery..   That night the temperature fell rapidly and none of us slept as we thought of the poor dog out in the cold, desperately trying to survive.  I did not relish the thought of turning up in the morning to find that he had frozen to death, but I did not know how he could possibly make it through another night of below freezing temperatures.

To our astonishment he was still there the next morning.  He had been much too smart to go into the trap, preferring to sleep on the outdoor chairs instead.  His breathing was labored and he had hardly eaten any of the food that had been left out for him that morning, but he was alive.  The neighbors had been keeping a constant vigil all night but we all knew that surviving another night was near impossible.  We had to catch him and do it fast because time was running out.

It was at this point that the vets stepped in.  Because he was proving so difficult to catch even in his condition, our vet (the wonderful Dr. Duffy Jones from Peachtree Hills Animal Hospital) recommended putting a sedative in his food to slow him down.  There was a chance that his adrenaline might counteract the medication, but at this point it was worth a try.  After he ate the food, we watched and waited.  Now this was definitely going to work.

Two hours later he was as wide awake as he had been before the sedative.  Arrgh!  The night was drawing in fast and we were running out of options.  Finally Dr. Jones suggested that he use a tranquilizer gun.  He warned me that because the dog was in such poor condition darting might seriously harm him, but what choice did we have?  The situation looked hopeless; we had run out of options. 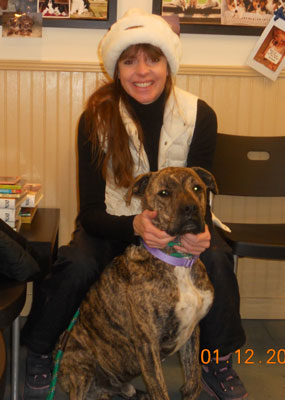 Sometimes the most obvious answer that has been staring you in the face all day takes along time to make itself known!  The neighbors had told me that even though the stray wouldn’t come up to people, he would come up to their dogs, even when their dogs were being walked in the neighborhood.  He was obviously dog-friendly and trusted them much more than humans.  That was the answer.  Go out into the back yard with Laura’s female dog Georgie and play – surely this is what was missing.   At first the stray wanted nothing to do with the friendly black Lab that came bounding over to him, but then the most beautiful thing happened.  The dog started to relax.  As the veterinarians and I stood watching ready with the tranquilizer darts, the dog came up to Laura  and Georgie and started to interact with them. Slowly but surely Laura put her hand up to him and stroked his head. As he came closer he nuzzled his head into her hand and then leaned his body into hers.  With catchpole in hand she gently slipped the loop over his head.  He made no move to get away but looked at her instead as if to say, “I’m done – take me home.”

My daughter named the dog Ben and as we sat with him at the veterinarian he put his head into my lap and went to sleep.  Utterly exhausted from his adventure, Ben had finally come into the warmth for the first time in at least a week.

Ben now resides at a boarding facility where he has made many human and doggy friends.  The other day Laura and I took him onto a local morning TV show to do theadopt-a- pet segment, and Ben took to the cameras like the true star that he is.  Now we just have to find the right family for him and we know that they are out there.  I have no doubt that soon our gentle Ben, who survived against all the odds, will find his forever home.

50 thoughts on “A Heartwarming Tale in the Winter Cold”