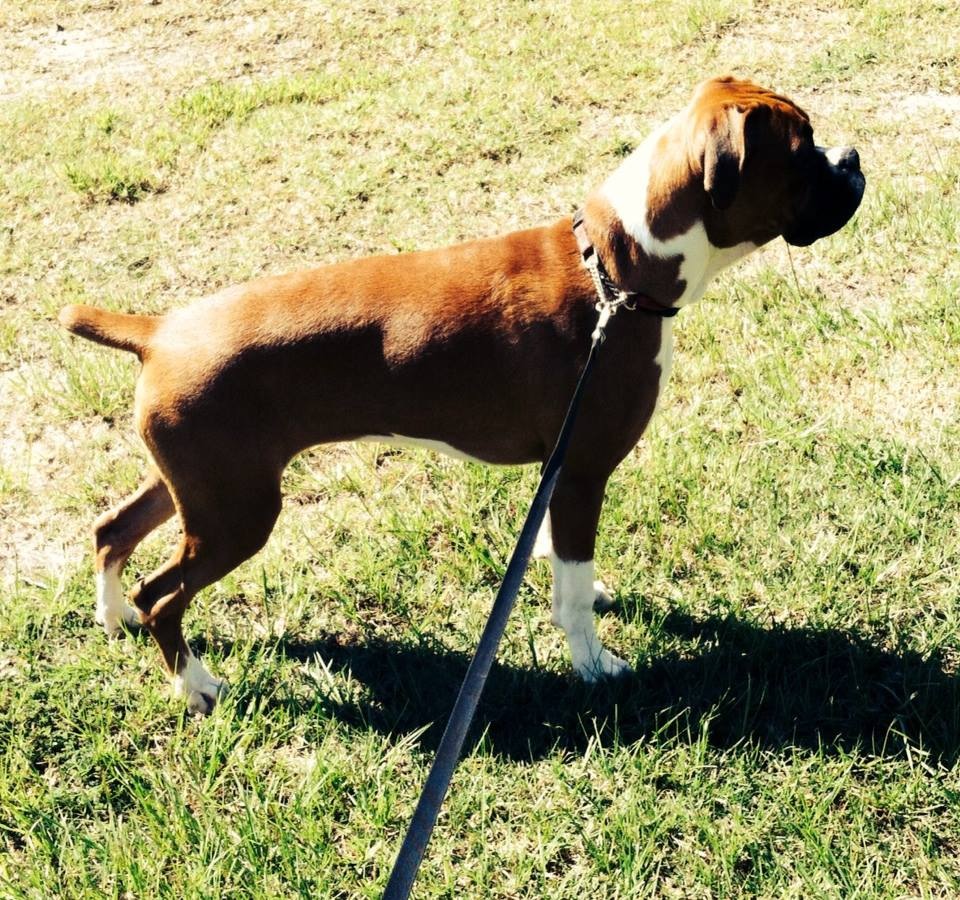 First off, thank you so very much for being a ray of light in such a dark world of training methods. I'm 20 , and I've had dogs my whole life, Boxers. So when I decided to get a dog of my own, it had to be a Boxer. To me, it's just not home if there's not a wiggly, nubby Boxer greeting me at the door. So I looked for awhile, and I finally found my wild child, Paisley. My parents agreed to get one dog, but we ended up bringing two, 6 week old Boxer puppies home (Paisley and Copper).

Right from the start, there was no doubt Paisley was going to be a handful. She had no bite inhibition, and would bite anything, which included fingers, toes, ears ,nose, and would jump up and pull your hair. She would also chew anything within her reach. There was even an incident with her chewing our coffee table and molding when I turned my back. Needless to say, I had a mouthy puppy, in more than one way.

When I would let her out to potty or play, she would growl and nip me when I would pick her up to come inside. So, as advised by a friend, I would alpha roll her or hang on to her in the mouth when she did it. Of course, it got worse, and as she got older, her already feisty, independent attitude, grew with her.

She also would get so upset when i would pet Copper or give him attention that she would go and pee in the floor while I was doing it. Another problem arose too, she was a boxer puppy with loads of energy and so was Copper. As they both grew, as their energy did too. They were unconcerned about humans when they were together, they would rip and tear through the house, and when they got into anything bad, a newspaper or fly swatter on their behinds was the norm.

As a result , in time, Copper became skittish, shut down, and nervous. while Paisley became even more rebellious and strong willed and WILD. I couldn't take her on walks without being jerked and was even pulled down one day. About a month or 2 ago, with her being at 6 months of age, off to obedience school we went, where we were handed a choke collar (or pinch collar) and a leash when we walked through the door.

There I stood, with an extremely wild 6 month old Boxer puppy on a choke chain, just jumping and pulling like crazy. They told me to bump or jerk her when she pulled, it all seemed a little intense for a puppy, but I did it. Why? I don't know. We live and learn.

As a few weeks went by at class, there was no change in Paisley. If anything, She was getting worse. I also overheard a few "trainers" talking about shock collars. As I listened in, one was saying they use it to teach their dog to go in the crate, by telling it to kennel, and when it didn't it got a shock, then she put a cookie in the crate with it when it did. This persons dog, unsurprisingly , is very dog aggressive. Another owner said they used the shock collar to teach the dog to come, by calling it and warning it with the vibration setting on the collar then shocking it if it didn't come. This persons dog, too, was dog aggressive and ran out of the obedience ring, where she had it off leash, and it attacked a friends 11 month old puppy.

Right then and there, my eyes were opened. I searched for gentle dog training methods. That's where I found Positively. I saw how gentle and patient it all was, with no quick fixes that cause damaging consequences. I went and hugged Paisley and told her how sorry I was for treating her with no respect and not being a leader, I felt horrible. How could I have let all of this negative treatment towards I dog happen? Truth is, it's considered normal , so you overlook it, then slowly, it creeps in, and you don't realize what is happening until you're having problems.

I'm happy to say, the choke chain is in the garbage, and at 8 months old, after using Positively methods for a few days, Paisley is behaving much better. We go on 20 minute walks 2 or 3 times a day with no problem. She is starting to open up, and look to me for guidance. No more using fear and intimidation. And, unlike before, she is getting much more physical, and mental stimulation. We are still training at the same place , where I hope I can lead by example, and with time, Paisley be a light in the darkness too.