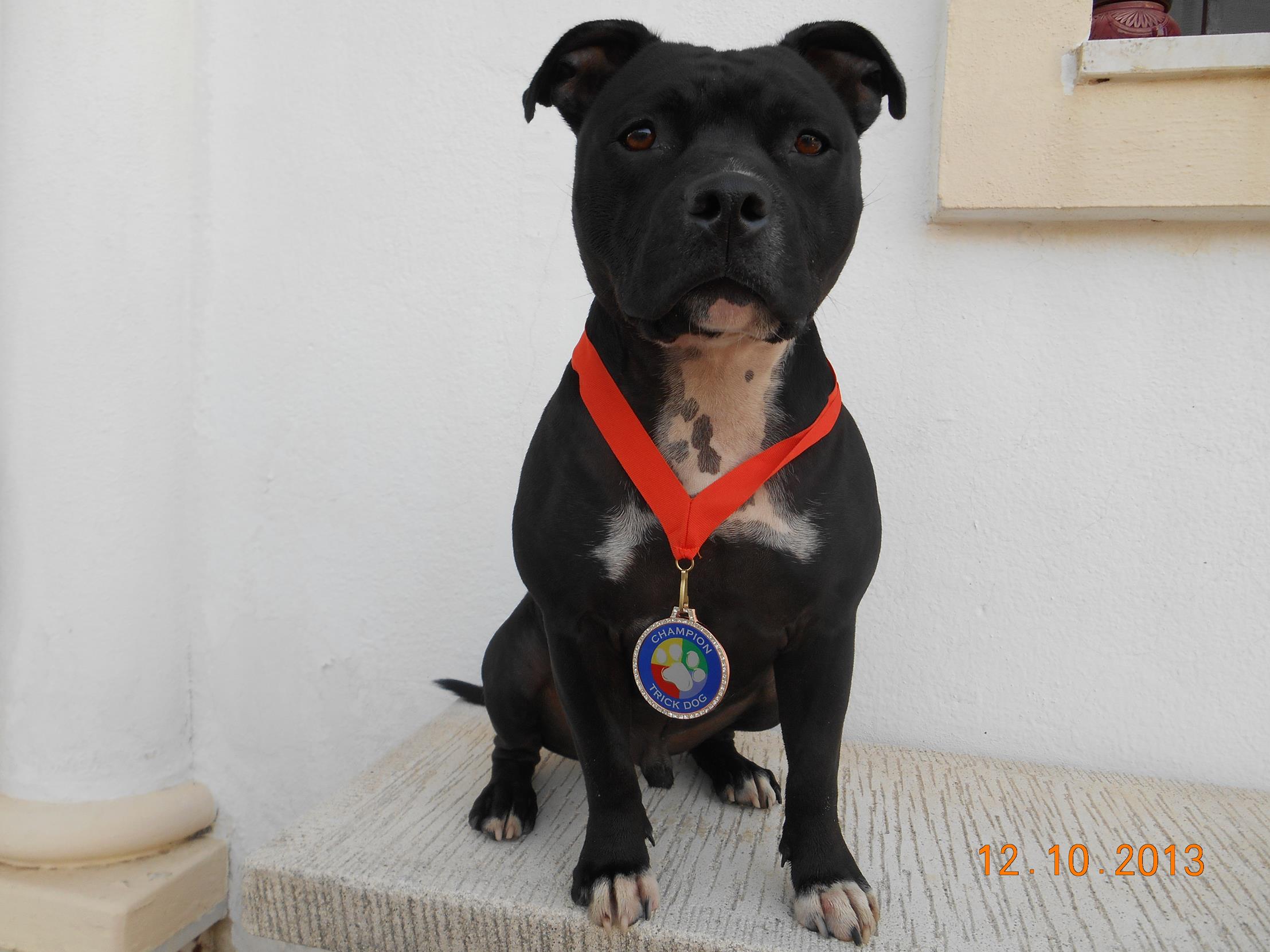 Jambo is the first Staffordshire Bull Terrier to be a Trick Dog Champion. Trained with Positive Reinforcement and helping break the Bully Breed stereotype! He has his own Facebook page, Jambo – Staffy Bull Terrier Trick Dog. He likes to promote doing Dog Tricks and Positive Reinforcement Training. He also likes to do his bit for the image of the ”Bully” breeds and help in the fight against BSL.

Jambo was born in May 2012. His pedigree name is Warrior For Life. I wanted to name him after our first Staffy, Samson, who we called Sam for short. My thought process was the following: Sam?… Jam! Warrior?….Swahili! His character – he’s mischievous, inquisitive, loving, extremely ”licky”, a bit of a comedien. He absolutely loves to say hello to everybody, usually by giving them a licky bath! Jambo is the Swahili word for ”Hello”!

Jambo is absolutely full of ”mischief” – his favourite tricks are ripping anything up that is made out of paper, cardboard, foam etc and stealing anything that isn’t nailed down – so that he can go and rip it up! I needed to do something to channel his boundless energy and I found that doing tricks was the answer!

Our journey began when we attended a Trick Dog Seminar given by the world famous Nando Brown when Jambo was just a few months old.  Doing tricks together has enabled us to learn new behaviours; to increase desired behaviours and decrease unwanted ones; to bond more deeply, and, most importantly, to have fun together.  All his tricks are taught through luring, capturing or shaping and he’s rewarded with treats, toys, praise and play (his biggest reward ever being his boomer/staffy ball!). There’s never any force, manipulation, intimidation, compulsion…. Jambo is a Trick Dog Uber Dude; Trick Dog Ninja, and Trick Dog Guru. All titles from In The DogHouse DTC!

You can see Jambo performing a few of his tricks on the Ninja and Guru In The DogHouse DTC demo videos! Jambo has the following titles through Do More With Your Dog: Novice, Intermediate, Advanced, Expert and finally CHAMPION! He has won awards for Tricks, Obedience, Agility, Best Dog, Best of Breed… He was named as Dog Of The Week by Your Pit Bull and You.

His photos and videos are regularly shared by DDA Watch, who fight tirelessly to help families in the UK affected by BSL, as well as by many other groups promoting a positive ”Bully” image and helping to show the injustice of BSL. Jambo has the honour of being ”Dog Of The Year” 2013 with In The DogHouse DTC.

Jambo is trying his best to be a good ambassador for the ”Bully” breeds and show just how ridiculous Breed Specific Legislation is! I have to have a ”Potentially Dangerous Dog” handler’s licence in order to have him in our family; he has had to be registered as a ”Potentially Dangerous Dog”; he has to be muzzled and on a 1m leash when we are out in public… Jambo loves everyone he meets whether human or canine.  Jambo achieved his Trick Dog Champion Title at the age of just 16 months – what better testament to Positive Reinforcement Training!