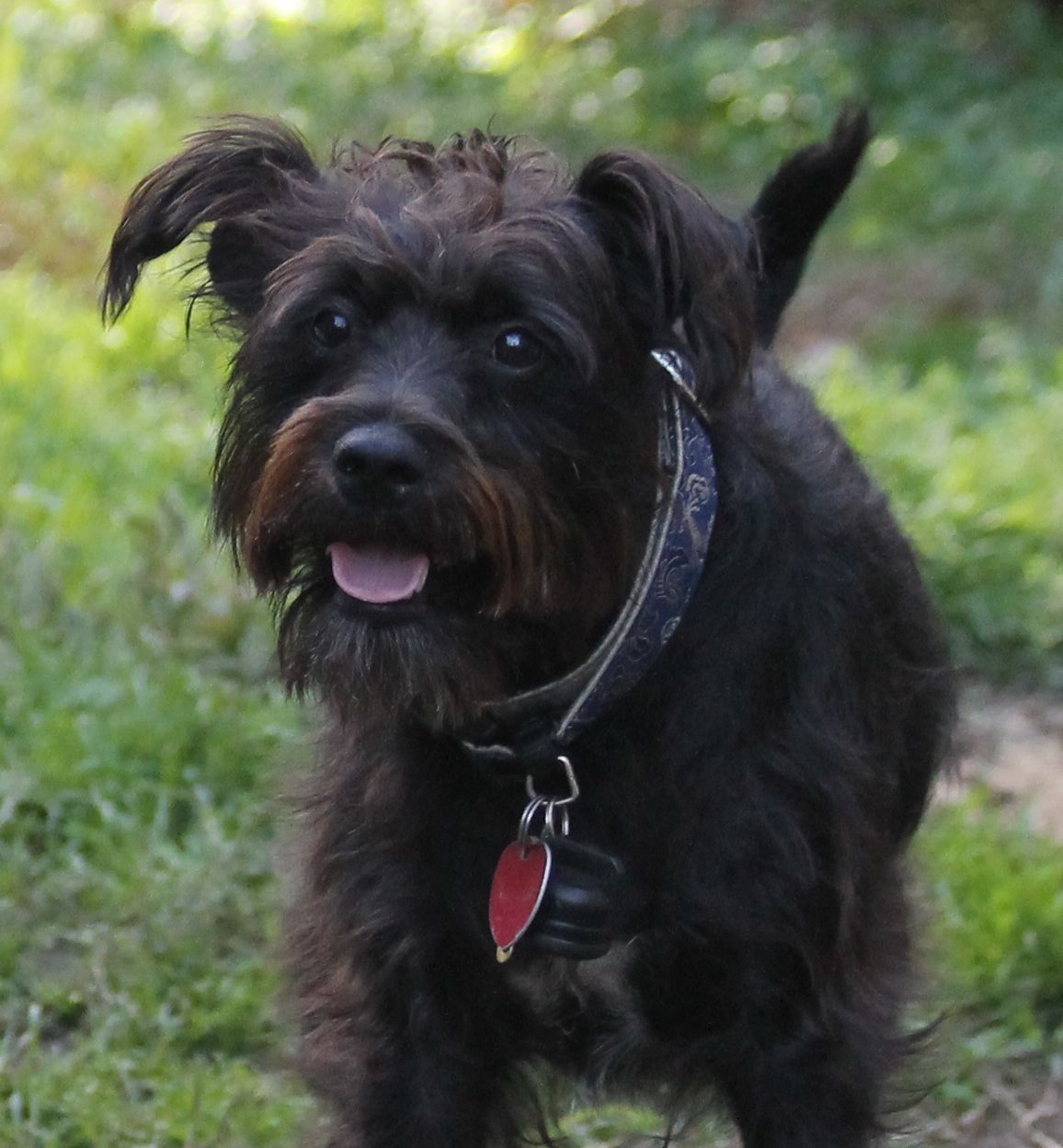 One evening in December 2011, my wife, Karen, was picking up our lab Lily from day care and noticed a scruffy little black mutt in the corner of a pen. His name was Inky and he needed a home.

Karen was told that Inky had been a stray puppy, that he and his brother had come from a kill shelter in Tennessee, and that he had probably been abused. Inky had been in other homes but, “It didn’t work out,” Karen was told, “He had tugged at the leg of a man’s pajamas, but nothing serious.” Even so, Karen fell in love with Inky immediately.

Inky was excited when he met our labs, Lily and Katie. He bonded with Karen right away, but he seemed wary of me, always concentrating on the location of my feet. It occurred to us that he had probably been kicked, a lot, and by a male. Whenever I came between he and Karen, or tried to touch him, Inky exhibited some of the telltale signs of fear — tucked-under tail, low ears, lip licking, etc.

On his second day home, Inky bit my leg. This continued on a daily basis. If I was near Karen, or I was alone with him, he’d bite me. When I was near his food bowl, he’d bite me. If Inky was in a room with Karen and I came in, he’d try to bite me.

We racked our brains trying to come up with a way to show Inky that he had nothing to fear from me. Karen and I even took to walking around the house with our arms around each other in an attempt to show Inky that we are a pair. We looked very silly.

Nothing seemed to work, and Karen and I were very upset. We could tell that there was something lovable in Inky, and we didn’t want send him back to the shelter, but we didn’t see a future where I would be bitten every day. One day, after taking all three dogs for a long walk in the woods with my ten-year-old niece, Inky chased her across the living room and bit her. We knew that we were probably Inky’s last chance at a stable home life, but this seemed like the last straw.

In desperation, Karen called the rescue for help and to discuss the possibility of surrendering Inky. The rescue folks suggested that we call a behavior specialist who worked with them. 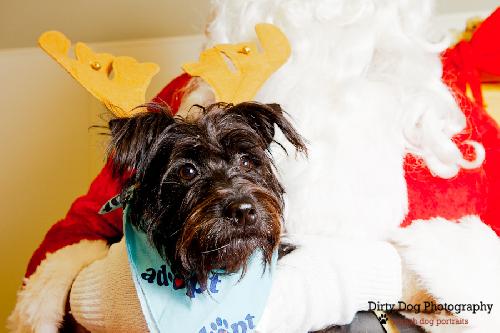 Here is a terrified Inky before he came to us. It’s hard to believe that he’s the same dog in both photos.

Sam Wike came to our house that evening and right away Inky bit him. Sam stayed calm, like the compassionate professional he is, and suggested that we put Inky in another room while we talked.

Sam recognized Inky’s fear and trust issues immediately, and that they were severe. He warned us that he might never be able to be in a setting other than our home. Sam told us that we had a lot of work ahead of us, and that we may never be able to completely remove the fear, but that we could find ways to increase trust. He encouraged us to continue to try and identify the triggers of Inky’s fear aggression. Sam gave us some reading material and ideas to deal with Inky’s reactive behaviors. Karen and I agreed to give it a shot.

We began to notice small changes using the techniques Sam recommended, and we built on those successes. At every opportunity, we let Inky know what a good boy he was and that he was safe. We encouraged his positive behaviors and lessened the importance of negative ones. We kept Inky sheltered from situations that might raise his level of fear.

Inky was still occasionally reactive to me, and when we described to Sam what was going on, he made a suggestion that turned out to be my key to earning Inky’s trust. Sam suggested that I take Inky to a quiet room, put on some soft music and feed him from my hand. I was apprehensive, but that night we tried it. Inky nervously took a piece of kibble from my hand, then another. We did this every night for several weeks.

Through this exercise Inky and I made a connection. His fear of me dissipated and he began to trust that good things came from my hands. I was able to touch him without a negative reaction. The real breakthrough came one night when Karen was working late. Without prompting Inky jumped up, lay next to me on the sofa, and put his scruffy little head on my hand. Nearly three years later, I get choked up thinking about that moment. Sam’s gentle, positive methods were not only a way for Inky to learn to trust me, but also a way for me to learn to trust Inky. Every night now, Inky curls up with me on the sofa.

A couple of weeks ago, Inky made his first visit to the vet’s office. He was a little wary at first, but as we walked into the office Inky had his head held high and his tail was wagging. He was the picture of a happy, confident dog, and he greeted the male doctor enthusiastically. I was proud beyond measure and very happy for Inky.

It’s taken a lot of work to help Inky, and we continue to work at it. We were able help Inky get to the point where he can relax and show the world that he’s a sweet, loving boy. Using the force-free, positive methods Sam taught us, we know we have the tools to help Inky through stressful situations. I am thoroughly convinced that there is no other way to help dogs like Inky than by using techniques that employ love, trust and respect. The outmoded model of dominance and submission is ridiculous, and does more harm than good.

We are now committed advocates of Victoria Stilwell’s Four Pillars of Positive Training. As a matter of fact, our experience with Inky and our work with Sam has inspired me to make a career change to one where I can help animals like Inky have the best chance at a happy future. Fortunately, this set of tools exists to help make that a success.