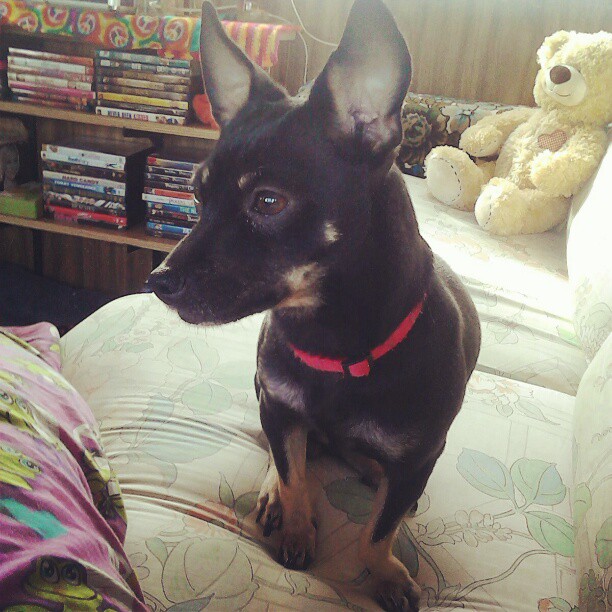 I had just lost another Chihuahua, Tink, due to the blatant irresponsibility of a roommate (won't go into that tragedy), and I wasn't ready to take in another dog. However, a friend – who works in rescue – knew about my dilemma, and called me about a week later to tell me about a dog that she had picked up off of the street. Canvassing the neighborhood, she was able to find out that this dog had been abandoned on the back porch of her previous owner's house, when they moved away. Left with no food or water, this dog managed to escape, and was running free on the block. My friend asked if she could bring her by for me to look at – and possibly take in. I agreed – thinking I would just foster the dog until I could find her a more permanent home.

Later that evening, she brought me the little black and tan crossbreed, and I immediately fell in love.

I dubbed her "Gypsy" because she loves to dance. And when she arrived, she was on the chubby side – so much so, that I at first thought she was pregnant – but my friend admitted to over feeding her a little because she was so emaciated when found. I decided then and there to use praise and toys when training, she obviously didn't need food, lol.

I noticed other things about Gypsy as well. Physical issues that, at the time, I wasn't sure whether or not would inhibit her in her training. I took her to the vet and had her checked out. The vet offered two possible explanations for her physical issues. One, she could have been crated in a too small crate, and wasn't moved to a bigger one as she grew – or two, she was born with the issues. What were the issues? Her front legs curve, her back curves, and she spends a lot of time walking on her hind legs – giving them a much more muscular look than her front legs. Other than that, she got a clean bill of health (though needed to lose a little weight).

So I took her home and started her training. She needed it. Her reaction to other people was pitiful. She hid behind me, or under anything I was sitting on, if anyone else came around. She didn't even bother barking at them, just curled her body up and dropped her head and tail.

When indoors with just me and the cat, she became a completely different dog – proving to me that she could be socialized and wonderfully friendly with a little patience.

My neighbors all fell into helping with her socialization. They followed my instructions to the tee, and it wasn't long – just about a month – before Gypsy was recognizing those that lived near us, and started greeting them with a wiggly happy body, and sometimes even a quick dance.

In about six months time, Gypsy learned all of the obedience cues. Sit, down, stay, and we added a high five for the neighbor kids.

Her recall was atrocious, and took some time. Now she has better recall than most other dogs I've seen. Gypsy likes to run, but always comes back when we call her.

I moved to another city – and she loves it here as well. She can't wait to get out and play with the people, and other dogs, in the neighborhood.

Her personality is that of a dog that you wouldn't even know had a bad beginning. Piecing her story together, we uncovered the fact that she was owned by a breeder, and that breeder left her because her physical look was keeping people from buying pups. Even though it was most likely the breeder's fault she looks like she does.

Her legs and back do not hinder her in the least bit. She runs faster than any dog I've ever seen, and it's only when she's standing completely still that you notice there could be something "different" about her.

I've only used force free training with her – not only because it's obvious she was treated badly before, but because it has built such a strong and happy relationship between us. Everyone, and I mean EVERYONE, that has met her has complimented me on her manners and behavior. And it makes me proud that in the two years that I've had her, we've made such progress together.

I had to let her live with a friend for a few months, while fighting my apartment manager to be allowed the two animals (Gypsy and the cat), and my friend was impressed with everything Gypsy knew.

Gypsy is home now though, where she belongs, and the two of us continue to bond – because having a dog is a lifetime of commitment and love. She's here to stay.

On a side note, Gypsy and I have begun teaching Punk the cat some cues as well. He listens and watches her more than me, and is making incredible progress!