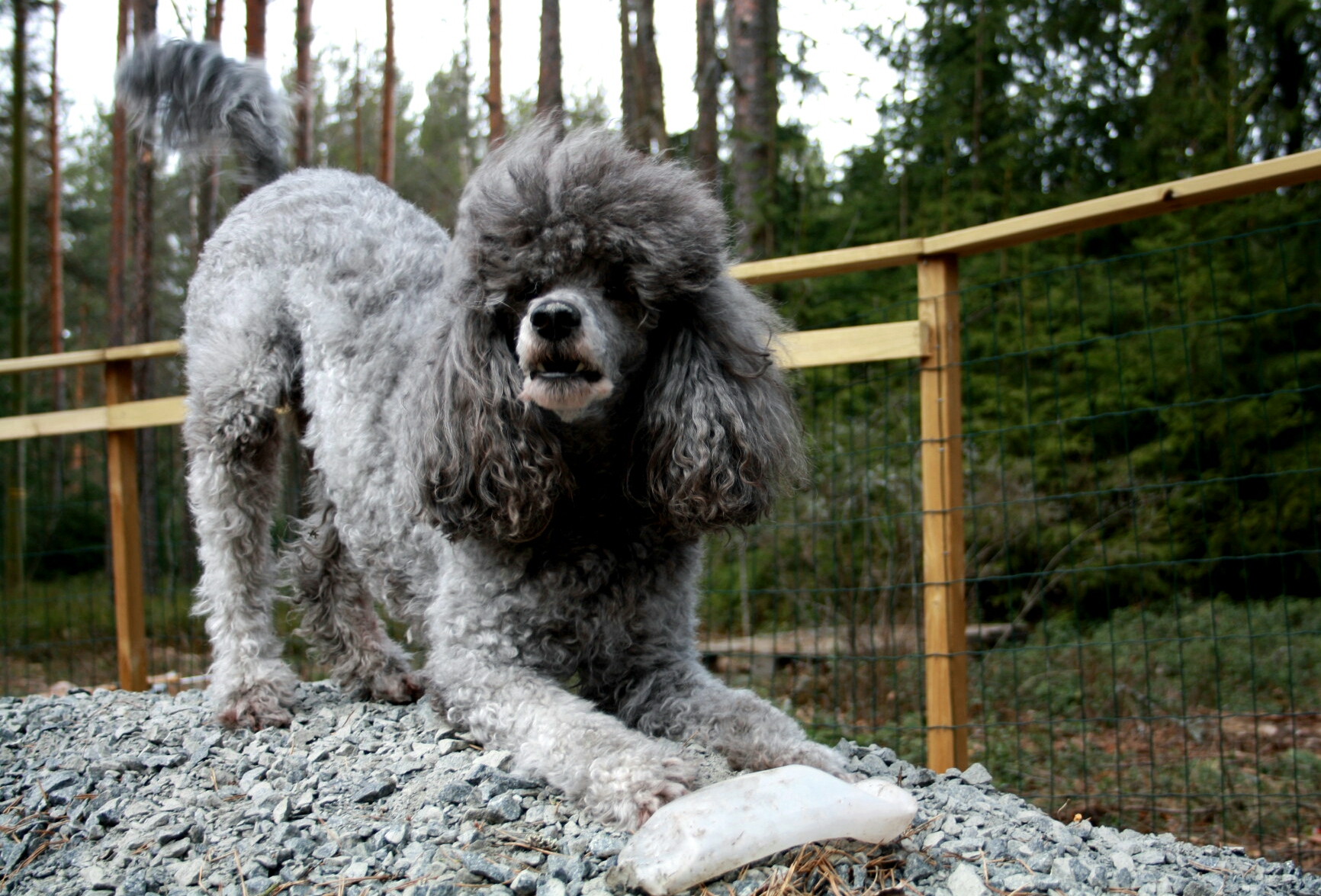 I grew up with a black dwarf poodle when I was a child, and when I moved on my own it was clear that my first very own dog would be a poodle too.

Aaro was a puppy I fell in love with. He was bought from a responsible breeder who took excellent care of him when he was a puppy, but even so he was affected by a problems unfortunately common in poodles; bad nerves and bad patellas.

Patellar luxation is often described with numbers from 0 to 4, 0 being perfect and 4 being luxated all the time. Aaro's knees were 3 and 4, and he was operated for the first time at the age of 8 months. The operation helped him a lot, but even so, he still had occasional pains and he suffered from fear based aggression, was unable to calm down and "over-heated" when he was playing with other dogs and people.

At the beginning I was told by many trainers that we had an authority problem and that I should show Aaro who's the boss. Unfortunately, and I'm ashamed to admit it, I tried those techniques. Of course they made our problems much worse, since Aaro now felt fear also towards his master! The one person a fearful dog should be able to trust! Needless to say I abandoned those "advice" soon and started to search for a better solution. That's when I read about positive training. I started to train Aaro with positive reinforcement, and I used those techniques also to my other dog Karem, a whippet boy. Because of his pains and his bad nerves Aaro didn't accept Karem at first. I introduced boys to each other by feeding them meatballs and treats, and slowly during the next months Aaro accepted Karem. Later, when our family grew bigger with Nadira, my beloved afghan hound, Aaro accepted her right away. Once again, because positive reinforcement and my confidence and trust in positive training.

Life with Aaro has never been easy; he could not run with other dogs of the family because he was anxious and because his knees were hurting if they tried to play with him. Being anxious by nature, he could snap at whatever moment and turn aggressive, or he would just shut down in the middle of a walk. Positive training methods, however, helped a lot and little by little, over the years, we have met and won many problems. Some bigger, some smaller, but I've always tried to be as positive as possible. Aaro trusts me completely, and it has made it easier to co-ope with him and his medical problems too. To me it has never been an option to quit with him.

Aaro was operated for the second time last November, and this time the operation worked even better than the first one! The source of his greatest pain was found and removed, and for the first time in many years Aaro was free of the pain for good!

I decided I would now try to introduce him to playing and running outside with the rest of the pack. Something Aaro had never been able to do.

First I took him outside with a leash and played with and rewarded him of being confident around running pack members. Slowly we worked towards being off-leash. Day by day, always a little longer time, until one day I let him loose. That day, for the first time in 7 years, Aaro was outside with other, larger dogs and felt absolutely OK! I even took a loads of poor quality cellphone pictures just to capture that magical moment. Now they play together outside each day, and Aaro is finally a part of the pack.

There are of course some things, mainly because of Aaro's nerves, that I must always take into account. However, positive training methods, and the confidence and trust they have built between me and Aaro, have been and will be our strongest weapon against insecurity and fear based aggression issues. Aaro's story is not a one with a rocky beginning and a glorious end, but one of small successes every day. Successes that are only possible because positive methods have given me tools to work with very needy dog of many issues.

Aaro is now almost 8-years-YOUNG and our journey together will continue. He is a living proof of the power of positive methods, and my source of inspiration. Strong and kind heart that overcomes his anxiety every day with the help of a positive and kind guide.