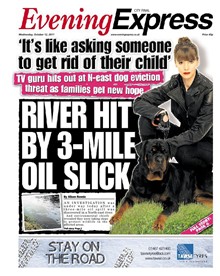 Victoria was featured in a story in the October 12, 2011 issue of Scotland's Evening Express newspaper.  In the cover article, entitled "Victoria Stilwell hits out at Aberdeen dog eviction threat", Victoria argues against a ruling by a local housing association that the families with dogs should be forced  to choose between their homes and their dogs due to dog fouling incidences.

6 thoughts on “Victoria in Evening Express on Dog Evictions”