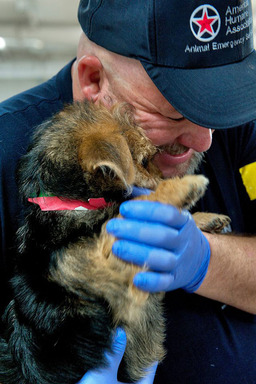 When a natural disaster strikes, American Humane's Red Star animal rescue team is always one of the first on the scene. The devastating tornado that hit Oklahoma this past May was no exception. In the aftermath of the storm, countless animals were left homeless, lost, or abandoned.

American Humane recently released a short documentary by legendary filmmaker Ric Burns, who followed the Red Star team throughout their month-long stay in Moore, Oklahoma. The team cared for over two hundred animals and reunited countless animals with their worried owners, many of whom had lost everything in the tornado.

I am constantly amazed by the incredible impact that the American Humane Association and the Red Star rescue team make on our community. This video is a beautiful tribute to their work. Watch the documentary below or click here if the video player isn't loading.