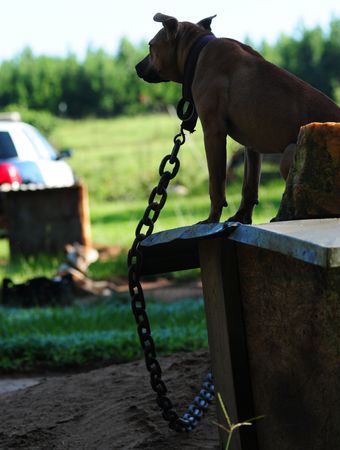 A multi-state raid on one of the largest dogfighting operation in history is sure to be sending a serious message to dogfighters everywhere. The raid uncovered close to 400 dogs living in horrific conditions; many were without food, water, or shelter. The dogfighting ring stretched from Georgia and Alabama into Texas, and authorities uncovered huge sums of cash, guns, narcotics, and dog fighting paraphernalia.

These raids change the lives of every dog seized by authorities, but serve as a lasting reminder that dogfighting is still alive and well in the US and around the world. A huge operation like this one will certainly put a dent in the fighting world and might even deter some from participating in this disgusting sport, but we are still in an ongoing war against this brutal and cruel underground sport.

The dogs seized in this raid will need serious TLC, including mental and physical rehabilitation. The severity of the abuse and neglect they have lived through is hard to imagine. I'm hopeful that some wonderful people and organizations will step up to help these strong and resilient survivors, and that dogfighters everywhere will learn that people are watching, and that participants in this cruel sport are no longer going unpunished.

If you would like to report suspicious activity and possible dogfighting, contact one of the following organizations: