Jasper and his mini-me mate Eddie: 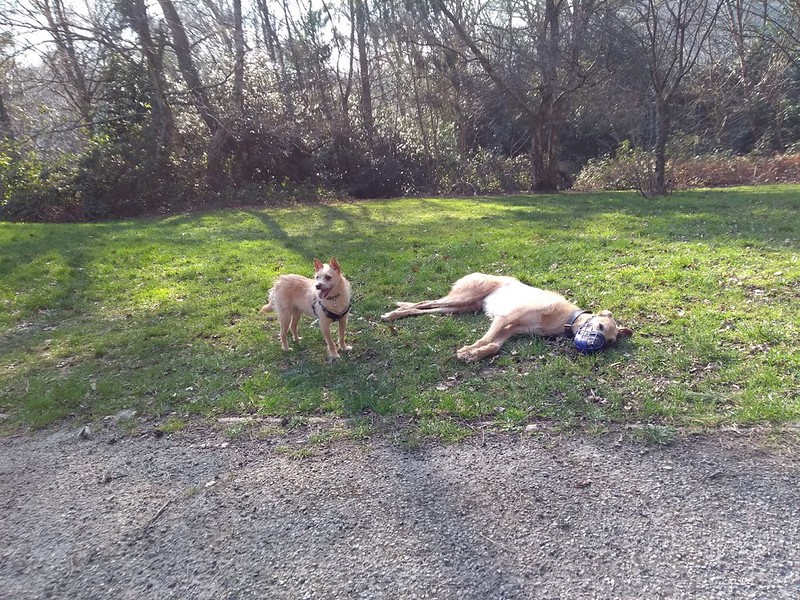 You can tell which is the lively one! 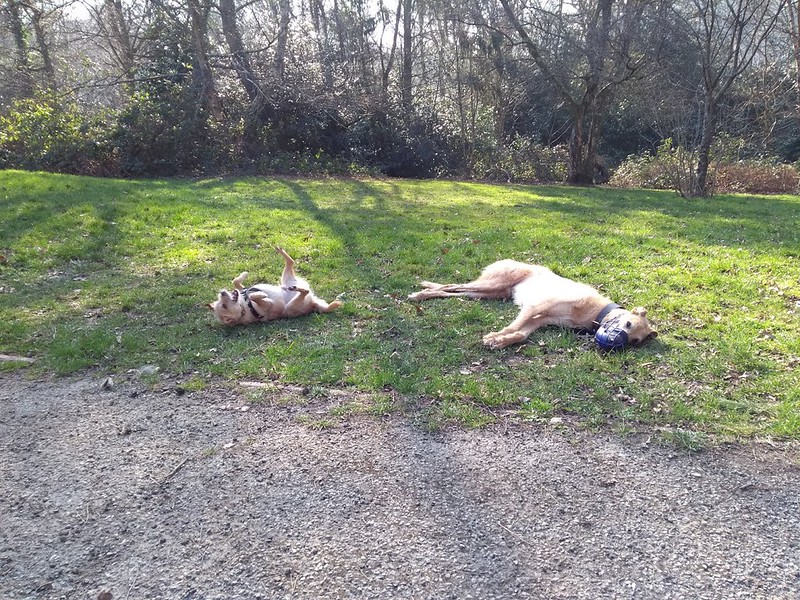 After today's walk, Eddie, his 'sister' Lola and 'mum' L came back to my house for a coffee, which we had sitting in the garden. J has always been fine with other dogs coming into our house as long as they're his friends, though it doesn't happen often at all.

At one point, Eddie jumped up on the bench in between me and L. J was straight over, sniffing Eddie as if he'd never met him before, and looking a bit... strange. No aggression, or freezing, or anything like that, and L, though dog savvy, didn't see it. I suggested she stopped petting J, encouraged J to go and do something else, and removed E from the bench.

A little later, while I was standing, Eddie came to me for some fuss, and J immediately got his nose in between us. Again, he sniffed E intently, and looked like he was thinking about humping him. Once I was out of the way, he soon calmed down and was absolutely fine again.

It seems like he's 'guarding' me from Eddie, but he has never done this on walks - I can fuss Eddie and give him treats no problem. I've never seen him attempt to 'guard' me before (if that was what he was doing) apart from one brief phase in his youth when he didn't like other dogs coming up when I was giving him treats. I'm very pleased with him that he didn't try to up the ante and it was all extremely low key, but still unsure what exactly was going through his mind - he's relaxed about Eddie & me getting close on walks, he's relaxed about Eddie in his garden, but he's NOT relaxed when they're combined!
Jasper, lurcher, born December 2009
Top

When I think about it, humans are the same, Ari - I was just thinking of a gig OH played where a drunken man in the audience who had been chatting to me draped his arm over my shoulders. That was OK, but if he'd come back for coffee after and did the same....

I'm not sure whether I should train for this or must manage it - a bit of both, I think, as chucking a bit of sausage just beyond Jasper would acieve both purposes.
Jasper, lurcher, born December 2009
Top

My current lurcher (avatar lady's daughter) will resource-guard me in the home but not on walks. Maybe the combo of home+valued resource is greater than out on walks where we are all moving and there is plenty of space.

I don't mind - it's easy to manage, and rarely do we have another dog in the home or are in other people's homes with another dog. As I know the reason, I'm fine with it. Nothing ever happens and nobody else ever notices.
A dog is never bad or naughty - it is simply being a dog

It's good to know it's not just Jasper being a bit 'special'! I thought I knew him inside out but this was a new one on me - partly because we have other dogs over so rarely, but maybe also because Eddie does rather like me (he recalls better to me than to L, but she doesn't seem to pick up my hints about the magic of sausage