The photos! Yes I really do take far too many pictures of Merlin. Problem with Norfolk is it isn't beautiful on camera. In person seeing for miles is awe inspiring, on camera you've just walked into the set of mad max.

I had to fill the memory card with something!

Here are a few of my favs, and you can see more if you want on my flickr! I fully reccommend Norfolk for dog friendly holidays, it was to the point where not having a dog with you was weird.

I also found it funny looking at the different breeds compared to our Lake District holiday. At the Lakes it was Border Terriers, Collies and Spaniels everywhere. Rarely you saw something else really. In Norfolk it is FULL of small pet terriers that are a little bit too porky, Labs that have probably enjoyed the doggy ice cream a bit too often, and lots of poodle crosses. Very much a 'pet dog' holiday. We even saw a Merlin clone in Cromer! At the Lakes people often thought we'd captured a fox when we were carrying him, I guess because he wasn't black and white or had long ears they didn't recognise it as a dog.

This was a lovely walk along the coastal path, and one of the nicer landscape photos! Lots of gunshots were going off around us so it was a good job Merlin is alright with them! 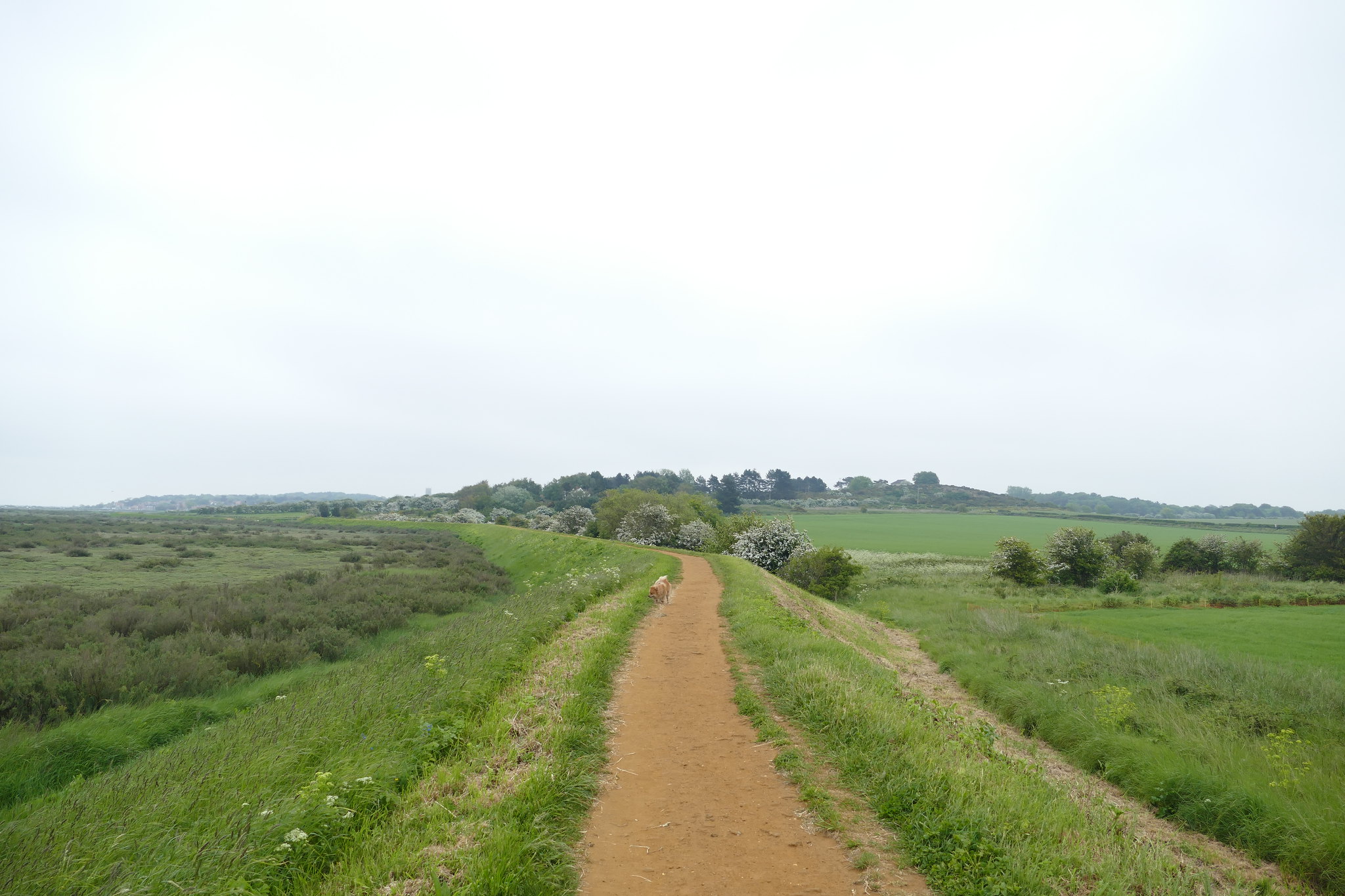 Merlin was our guide, which is probably why we took 7 hours getting back. 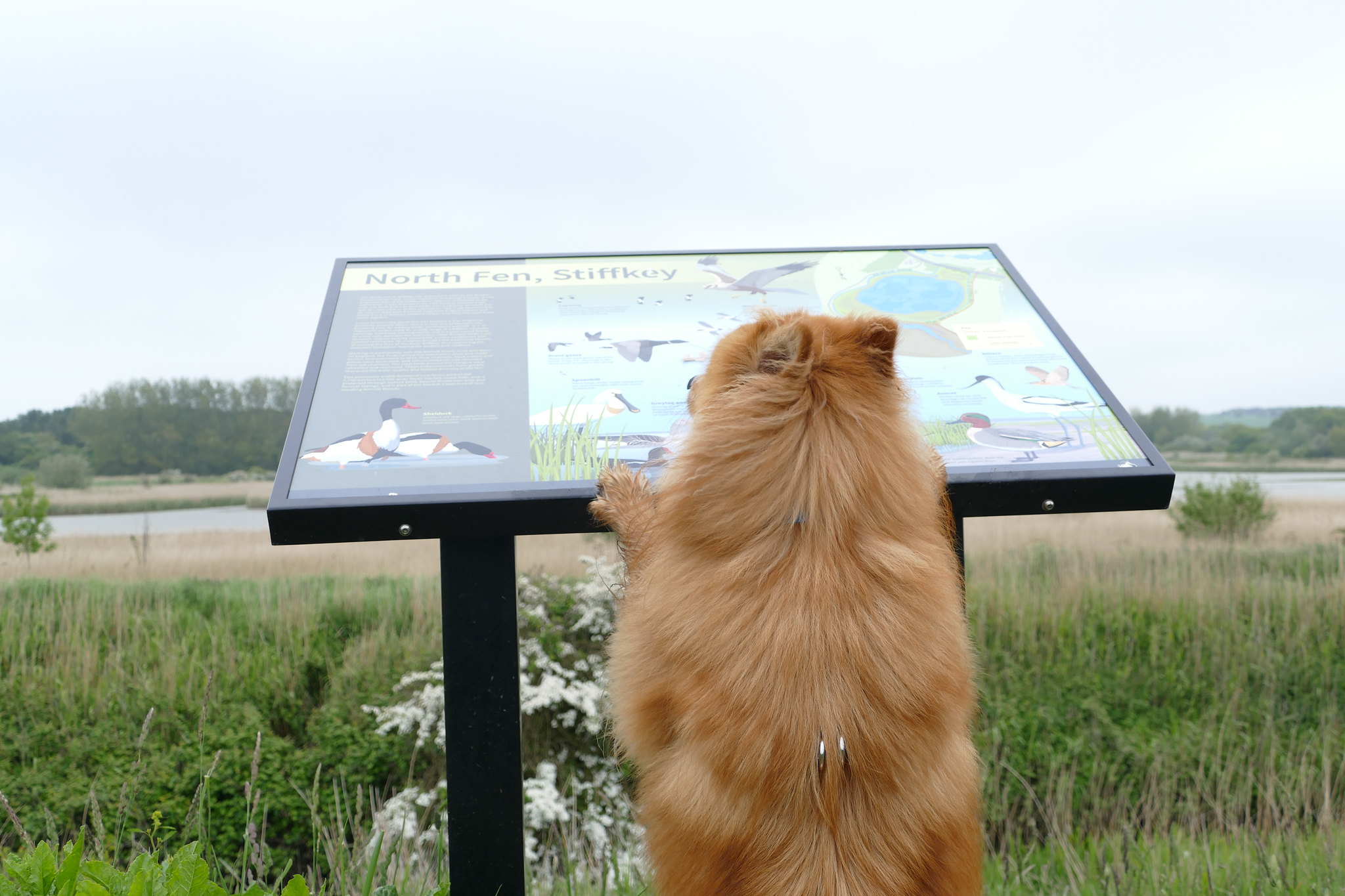 Merlin realising that coastal grass isn't quite as tasty as normal grass. 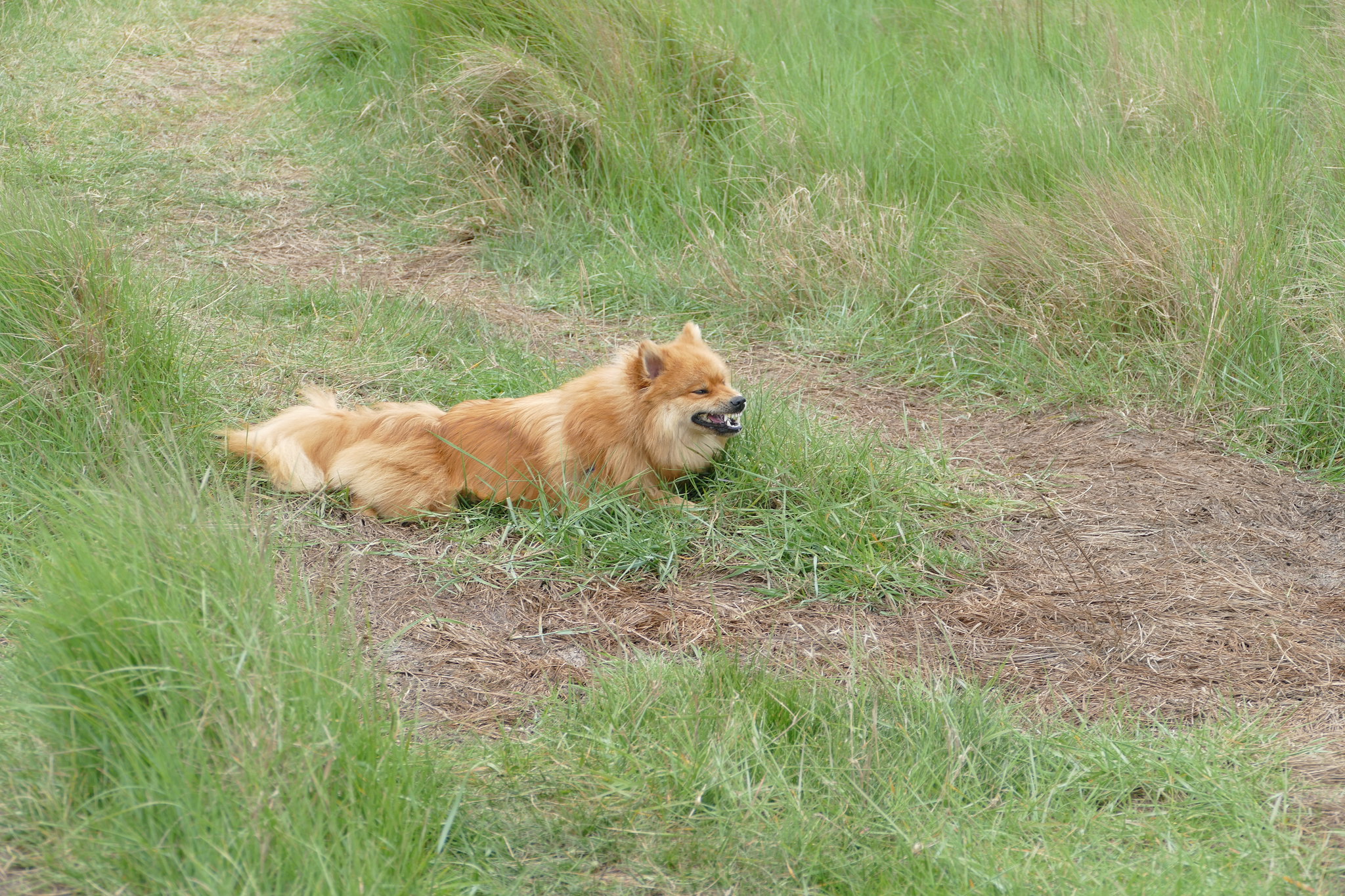 Merlin at the Pine Forest next to Holkham Beach. Was an absolutely lovely forest walk, but very strange that you can hear the sea the whole way through! 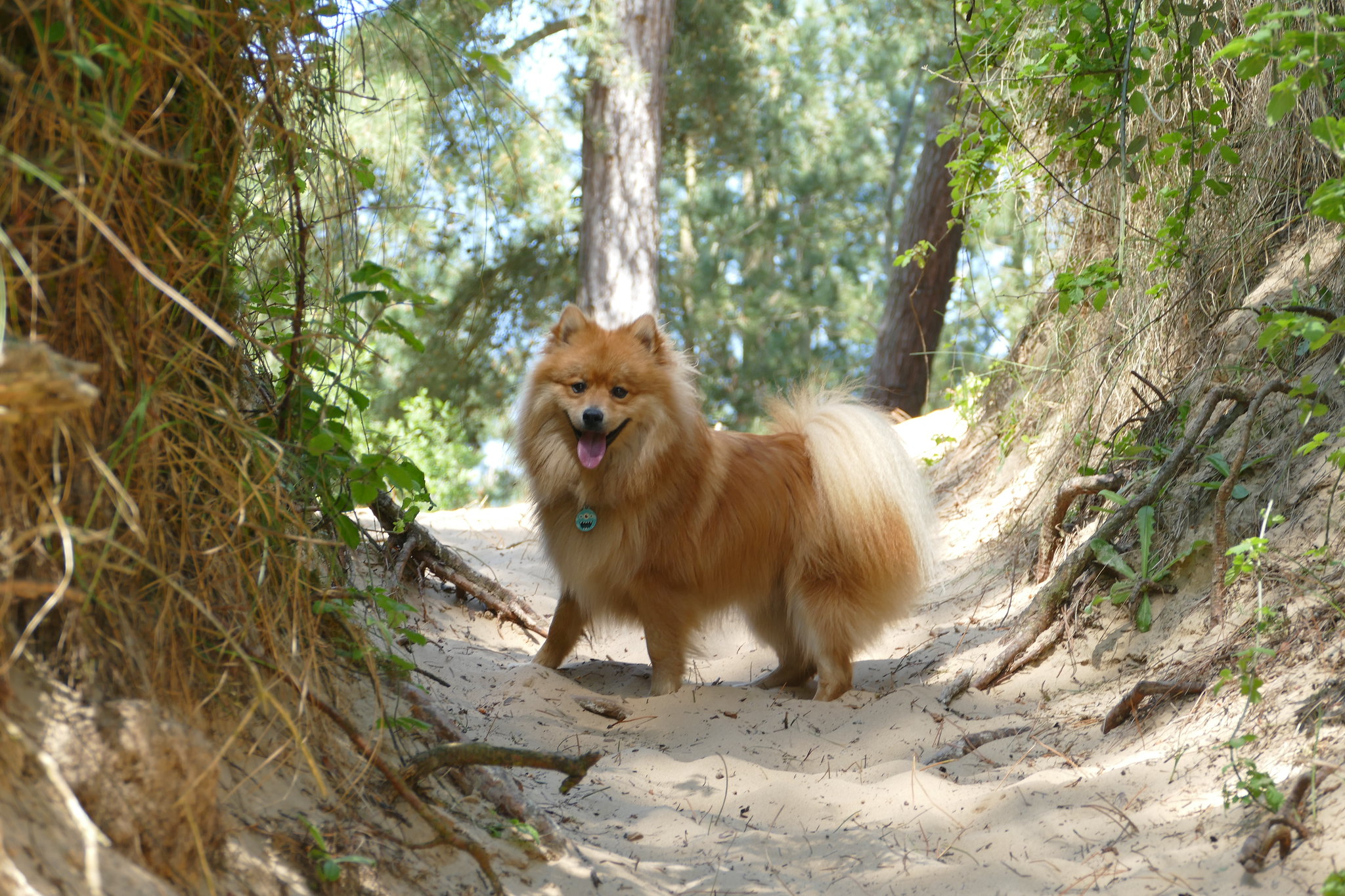 Just to give you an idea of how tall the trees are, that is my 6ft 2 brother sitting down at the bottom. 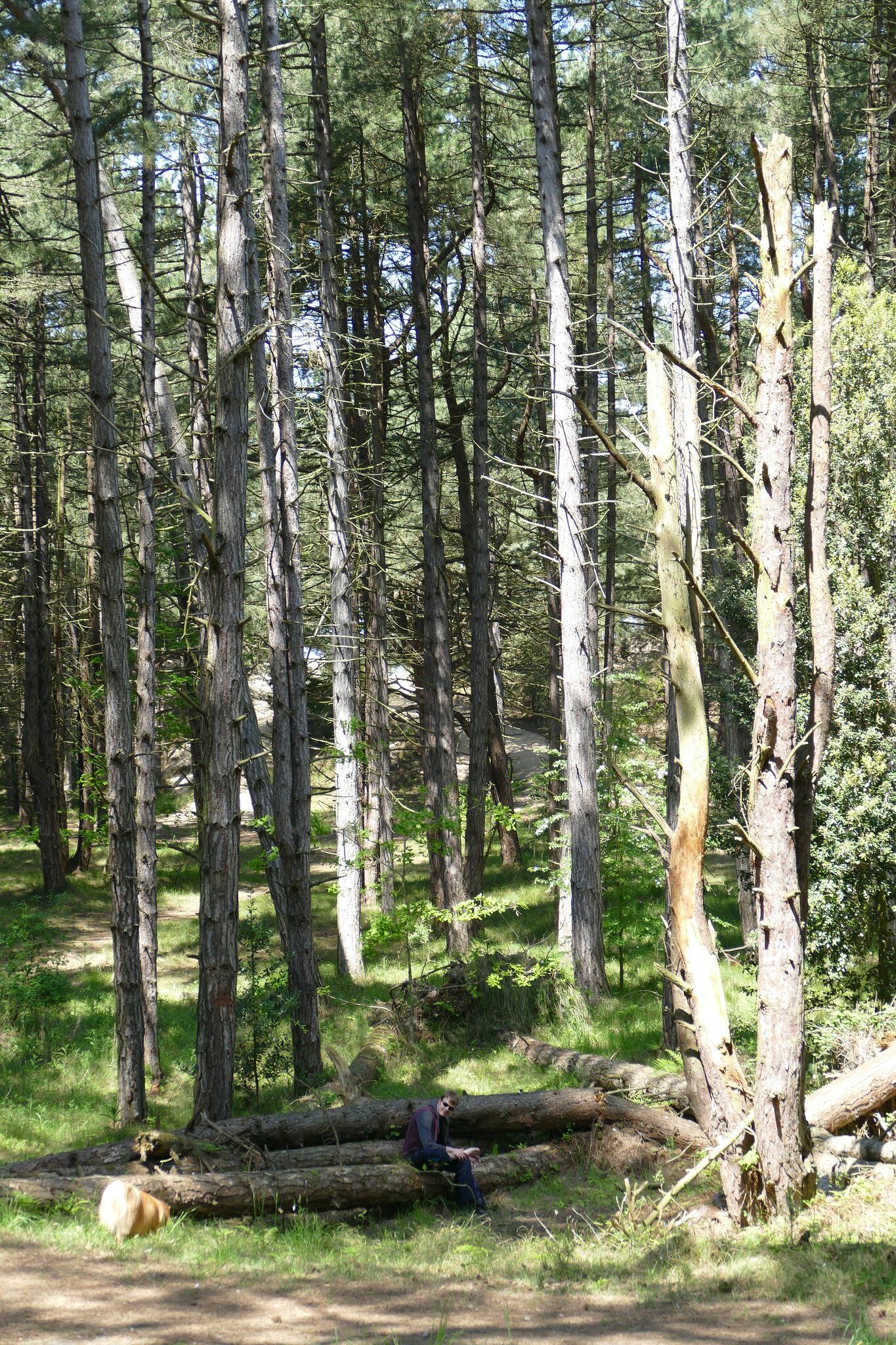 My long suffering OH posing (not really he's telling me to stop taking photos of him as he hates photos!).

Is there anything more beachy than these fences? 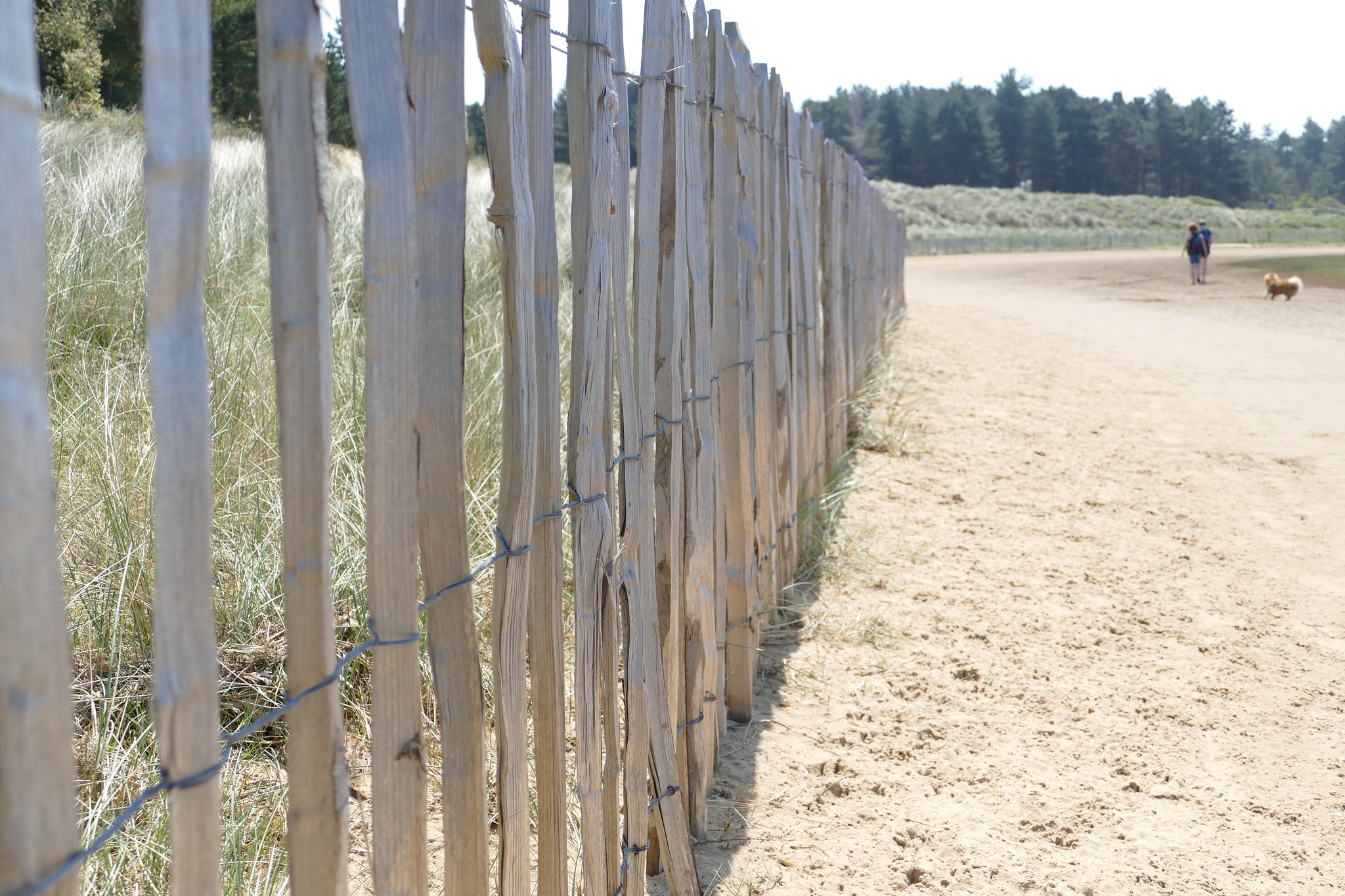 Sometimes Merlin thinks the best way to swim is to become a Dolphin. 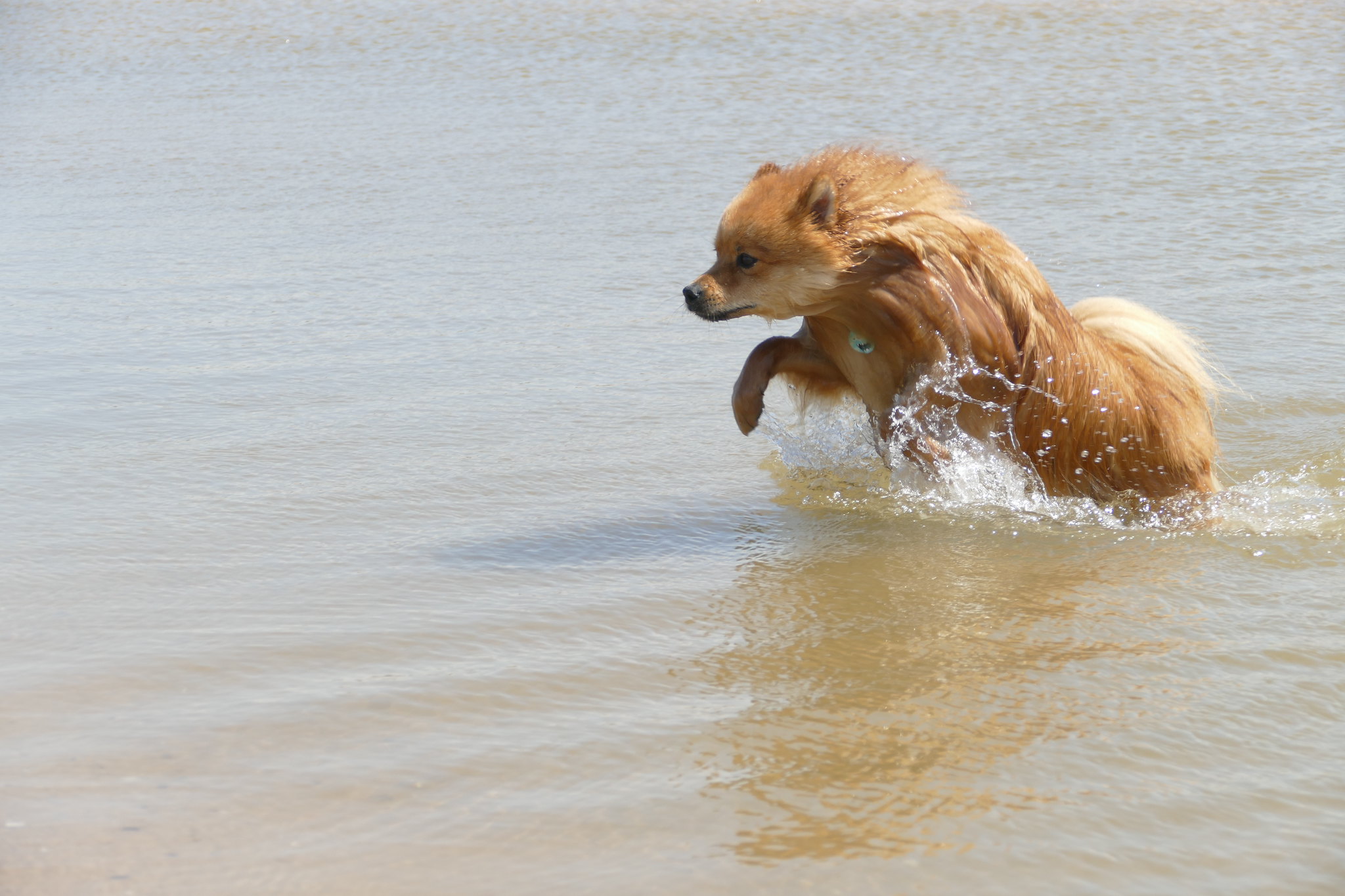 Then have you ever wondered what a double coated breed looks like coming out of the water? Hint: some cave dwelling monster. 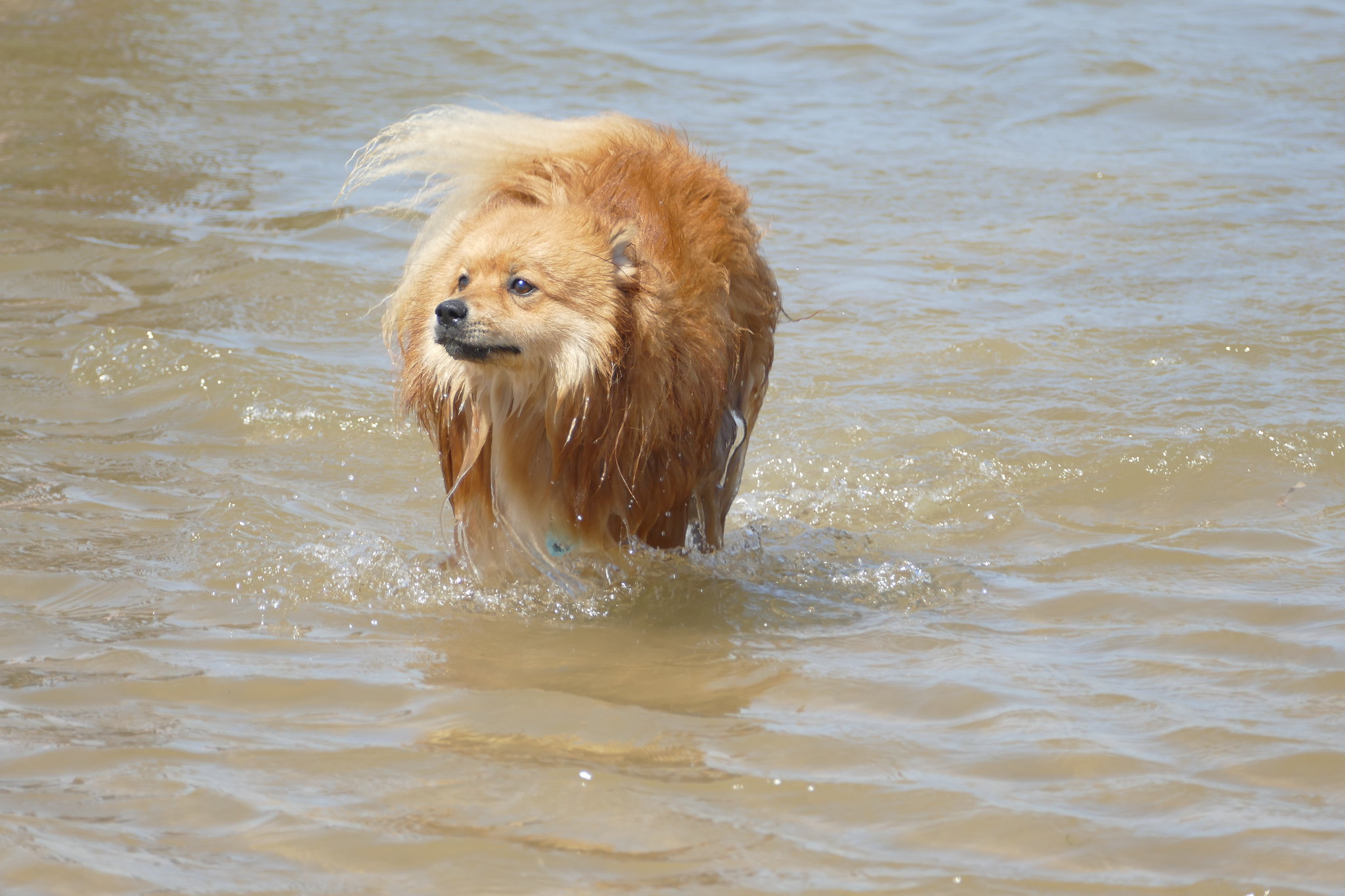 This is Holkham Beach with the view of the Pine Forest! Best beach we've ever been too. So dog friendly is hurts. Really busy but also really huge so it feels like you have the beach to yourself at times. The sea is also perfectly clear, though can be a bit rough (it is the North Sea after all!) 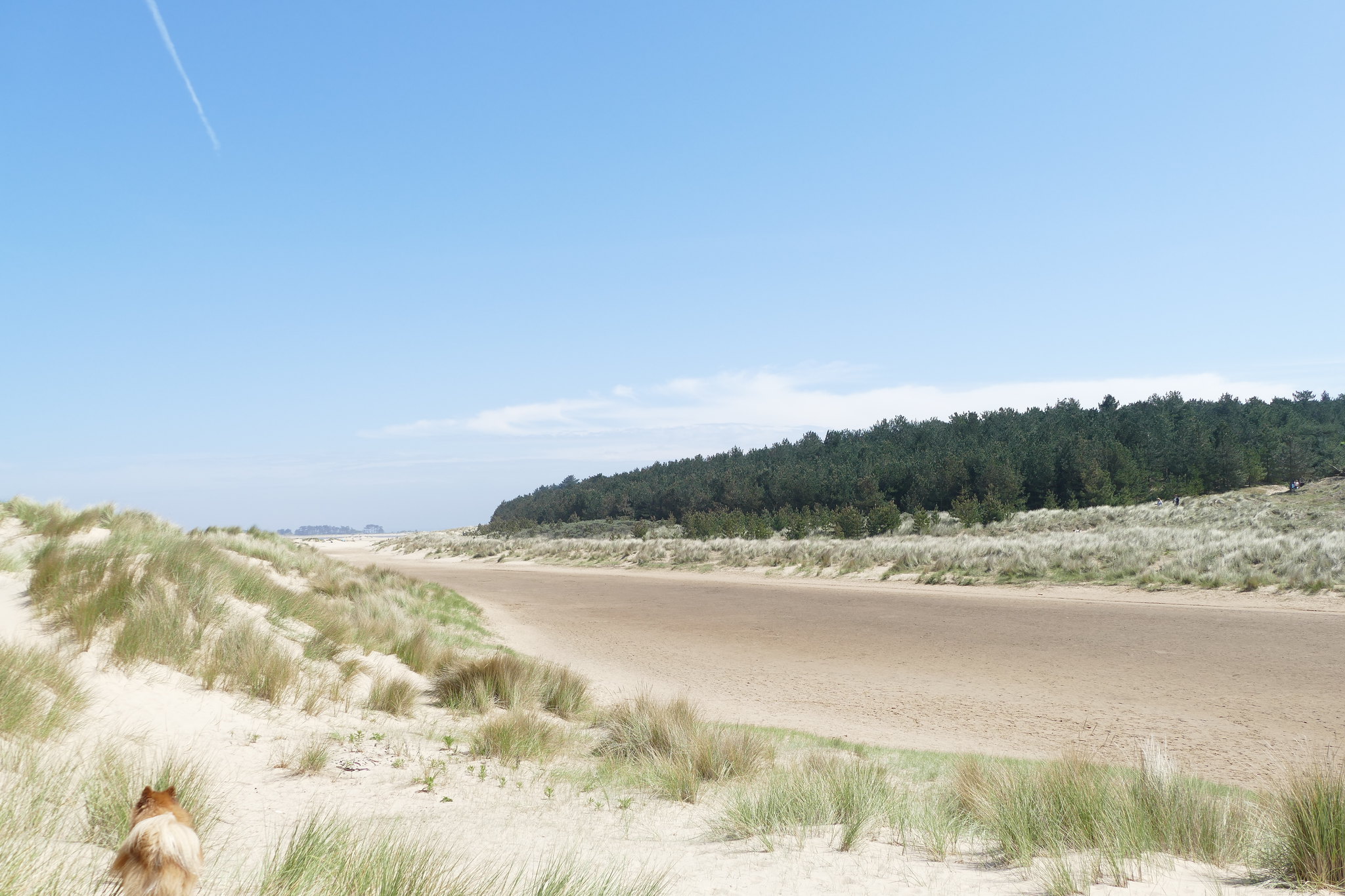 Merlin decided to play a game of hide of seek by himself. We were sitting down on the dunes, and he just went off and hid behind the bushes looking at us. Can you spot the dog? 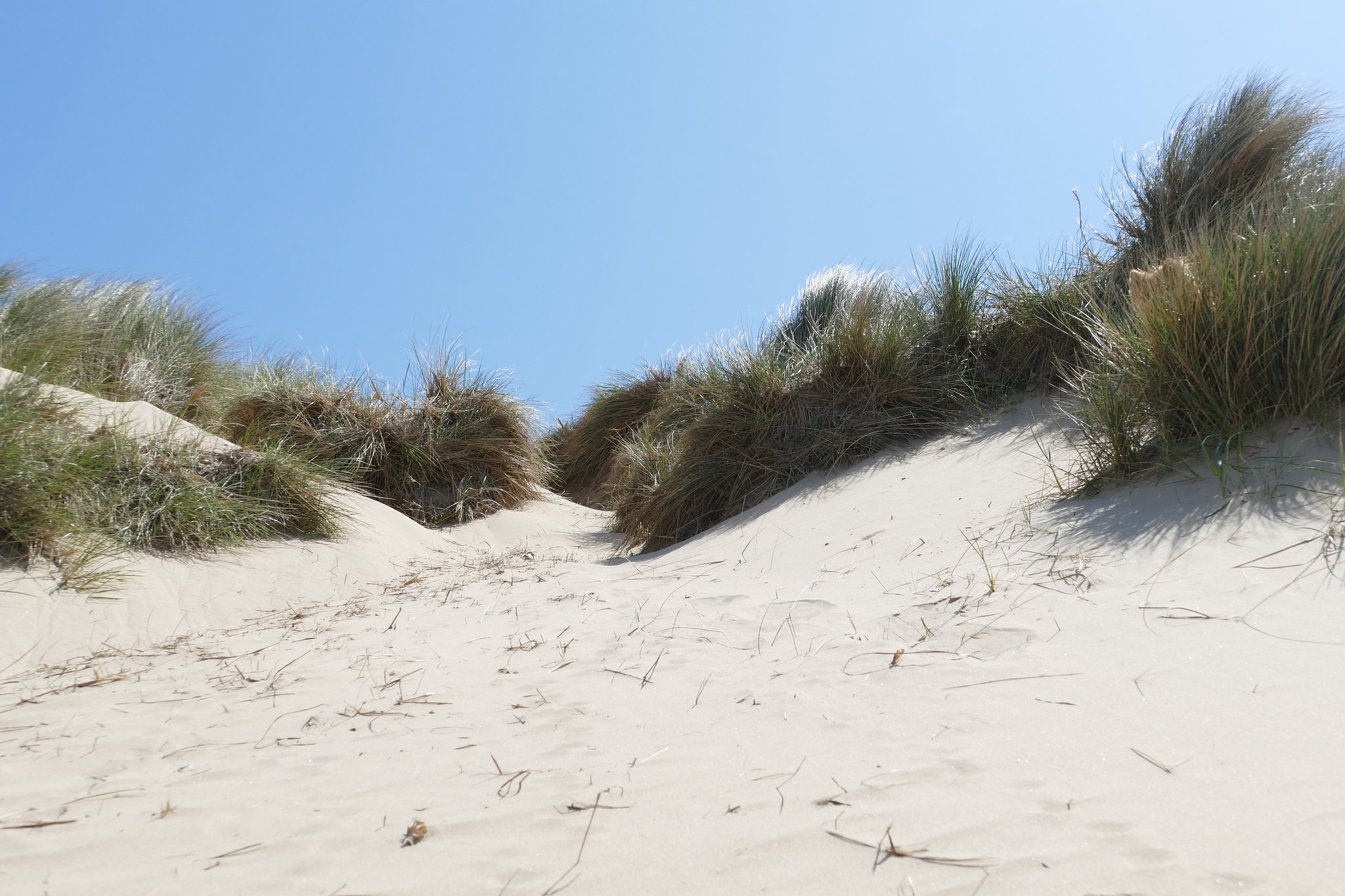 Merlin believes that if he just jumps high enough, he can reach flying birds. On the beach, without fail, he'll chase seagulls that fly over him. These ones started stationary so he really go into it. He is much, much further away than the photo appears, he really has no hope... Still he tries to the laughs of onlookers. He'll run along with his head facing up, jumping as high as he can. 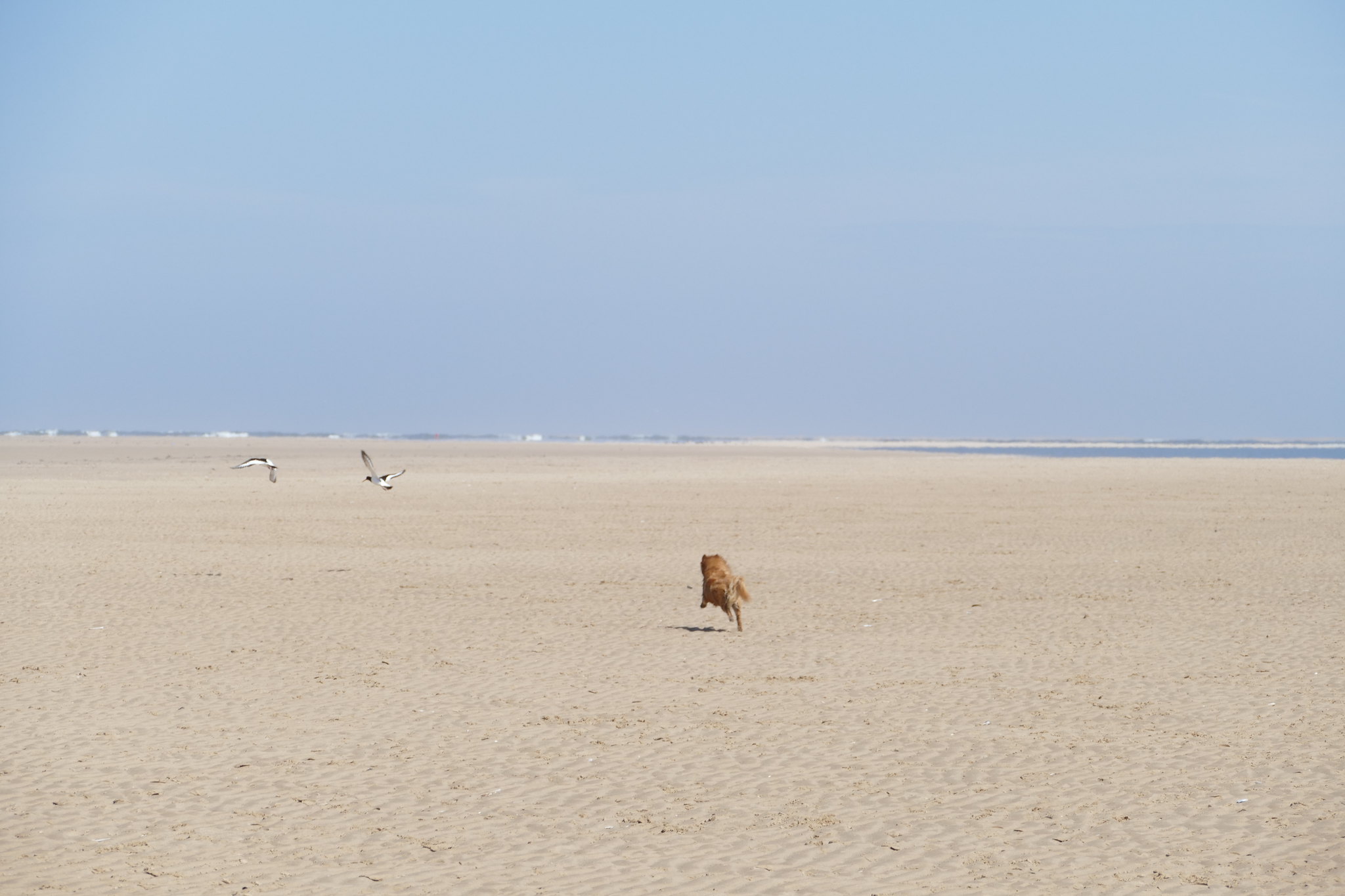 These two met at the Stiffkey marshes. Poor cocker hurt his ear so he had blood on his neck, but it didn't seem to bother him. The Cocker would run into the bushes and hide from Merlin, then jump out at him. They really got on from the get go, was sad to split them up. They were even sharing this egg sac thing between them for a bit, one would drop it for the other to chew for a bit... Until it magically dissapeared and the Cocker was licking his lips. 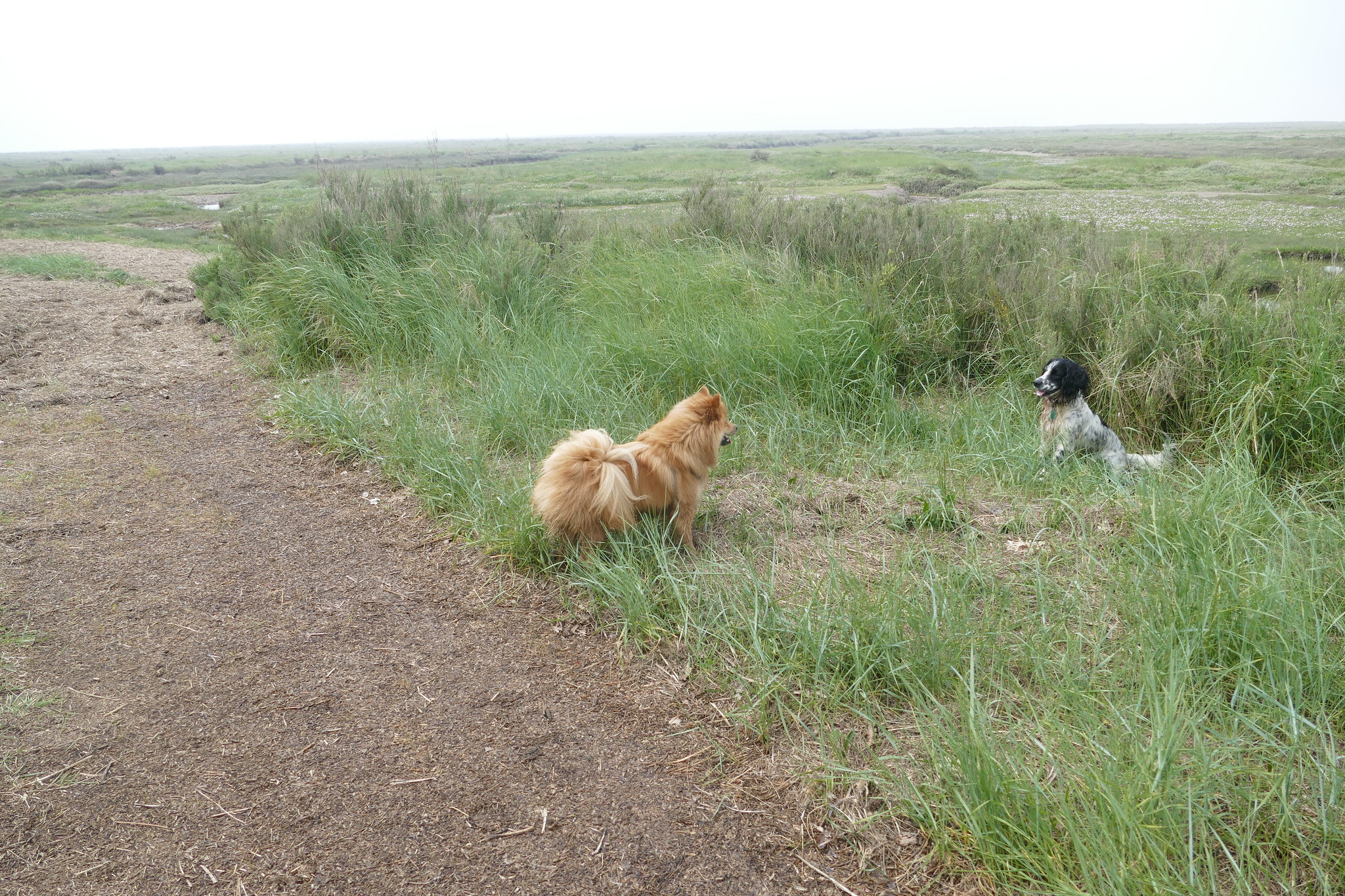 Following the dog, its a good idea right? 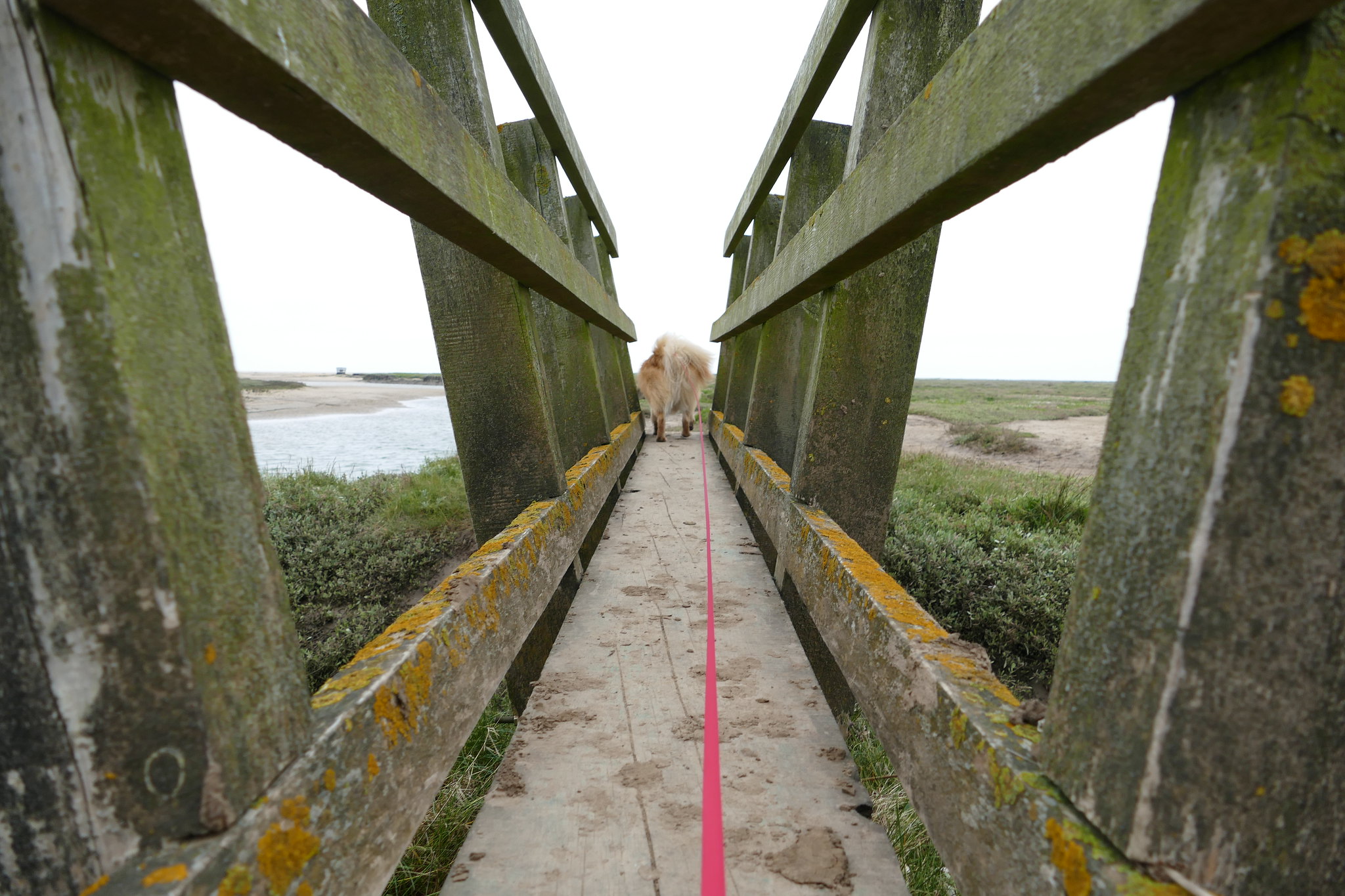 Was a very misty day at the Marshes, you couldn't see that far ahead of you really. Thunderstorms were due so we headed back, but Merlin decided he didn't want to go back and went here and sat down, refusing to budge. He just wanted to look at the view (aka the wildlife) for a while longer. 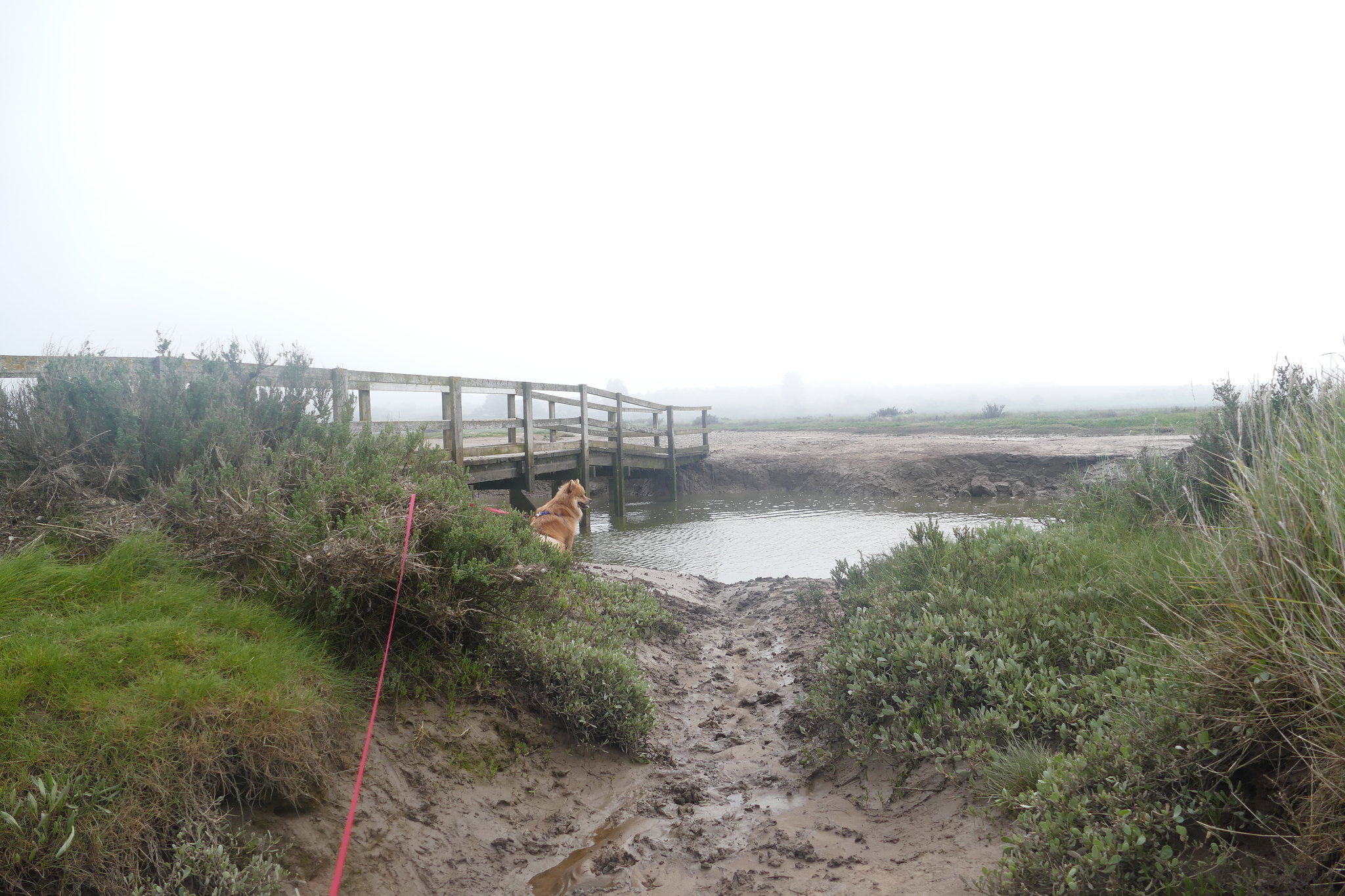 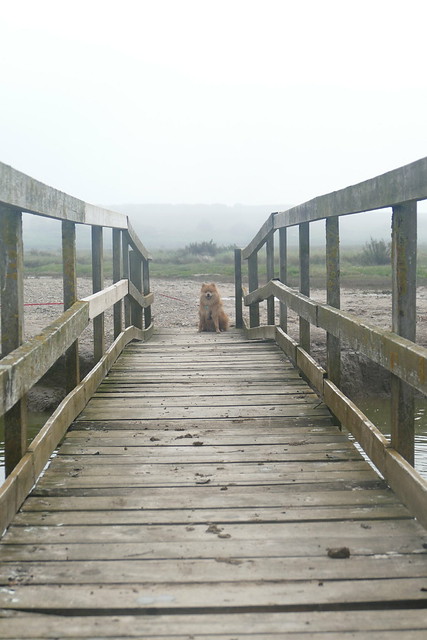 Those are some of my fav, lots more on the flickr. Some are weirdly coloured because my cam was messed up which is annoying! If they were well coloured some of them would have been lovely.
Top

Aw, thank you for a Norfolk fix

If only they could move it a little bit closer to where we are, or at least remove the M25

awwww that whole place looks lovely. makes me sad i wont be able to take bax on my vacation in july (no dogs allowed at our cabins)
Baxter (AKA Bax, Chuckles, Chuckster) Rat Terrier, born 01/16/13
Top

what host do you use for your pics btw? i use tiny pic and lately its been flipping all of them sideways =(
Baxter (AKA Bax, Chuckles, Chuckster) Rat Terrier, born 01/16/13
Top

I'm using Flickr. They have 1tb of storage for your photos for free!
Top