he IS a basket of trouble isnt he

He defiantely is! He worries me so much. Right now I got his lead out, and he just lay back down. That isn't a normal reaction from a young dog... Thing is when he's off lead he seems like he's enjoying it so much and he doesn't stop running, so I then think he's not in any pain nor lethargic. Maybe he just really despises the on lead bit. Unavoidable unfortunately.

I was going to say that it's normal for Jasper and that it was normal at Merlin's age too, but then Jasper's not the best example of 'normal'.
Jasper, lurcher, born December 2009
Top

Well Jasper and Merlin do seem to be cut from similar cloth so maybe it is normal for Merlin too! I think it is because Merlin is a serious routine lover. I tested it out after I made the post, kept picking up the lead, then I got my coat on etc:. No reaction. Then it got to 10am and Merlin was sitting by the stair gate woofing because my mum was late. Then as soon as my mum got there it was suddenly 'OMG WALK LETS GOOOO' and pawed at the front door.

Also discovered a new way to stop him being reactive; spongey balls. He found one at the end of our road and kept it for the entire on lead walk. He saw things he would usually bark at, but he was so foccused on nomming the ball it kept him quiet save a few muffled woofs. Was an amazing walk today with him actually, we even managed to sit in the pub for 30 mins and he was pretty chill about it. Then one of his ultimate buds passed the pub by and Merlin got SUPER excited and licking the poor Lab's face to death.

Love my dog to bits today. Here is the maniac chasing his ball; 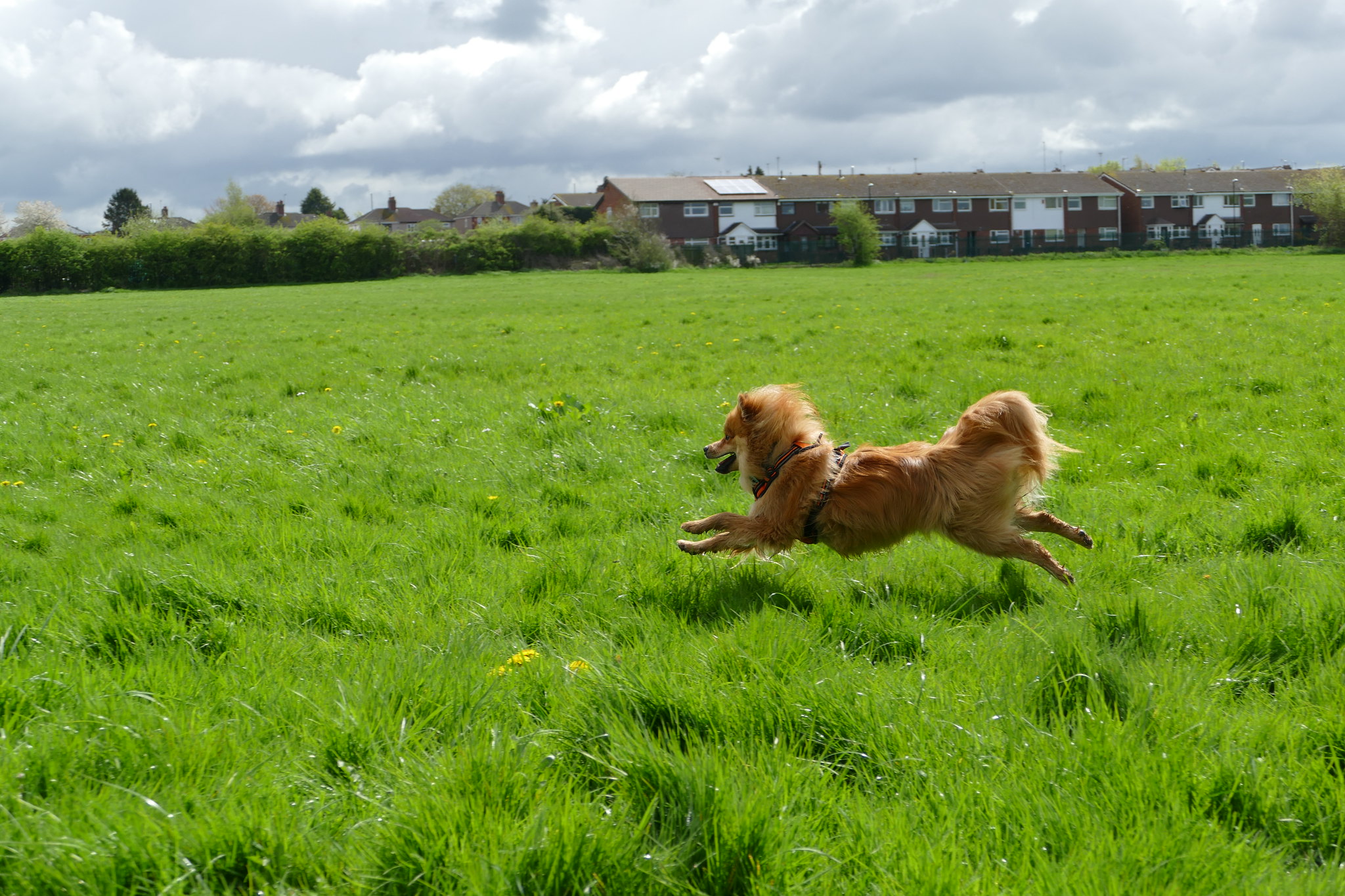 All the animals are having babies, too. Tried to find some ducklings (with Merlin on lead ofc!) to take pics off but we didn't see any today. Did snap a lovely pick of the blossoms, err, blossoming! Our walks are going to get much prettier now. 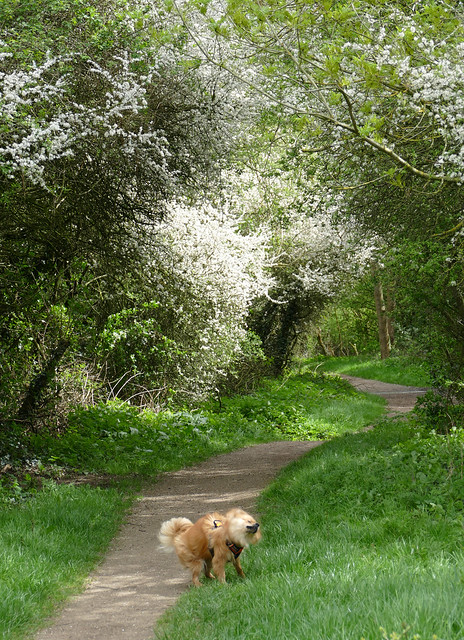 Lotsaquestions wrote: ↑
Wed Apr 25, 2018 8:05 am
I think it is because Merlin is a serious routine lover. I tested it out after I made the post, kept picking up the lead, then I got my coat on etc:. No reaction. Then it got to 10am and Merlin was sitting by the stair gate woofing because my mum was late. Then as soon as my mum got there it was suddenly 'OMG WALK LETS GOOOO' and pawed at the front door.

Well, apart from the pawing at the front door bit of course. I'm amazed at these people who can feed their dogs at any point in the evening without the dog complaining, or decide to skip a walk without incessant whingeing.

I was killing time earlier searching for people from my dim & distant past on Facebook, discovered my very first boyfriend, from when I was 14 or 15, and found that he lived just down the road from me though we grew up in the Midlands. I wasn't going to get in touch because we only went out for a couple of weeks, but then I noticed he'd just got two Border collie puppies...

Well he asked me out.... But yes, I thought that - not just two siblings, but to Border collie siblings

If he isn't mad now, he will be soon

Could you give a side photo of the muzzle? But really, as long as it doesn't stress him out, stops him biting the vet and doesn't fall off, it's doing its job. I have heard that if a muzzle holds the mouth shut that can be dangerous even just for a vet exam - I don't know if that's really the case or not.
Jasper, lurcher, born December 2009
Top

Maybe he was hoping the siblings would tire each other out. His house is going to be in ruins!

It doesn't hold his mouth shut he can drink, pant etc: I'll get a side photo next time I put it on him, he's snoozing atm! It is really bulky around his eyes.

It should do the job of not biting and he'll only be wearing it for really small amounts of time, so maybe it is enough. He looks a bit silly in it, like bane from batman.

Today is amazing I saw infinity war and it was amazing and everything I hoped for, 10\10

, it had loads of action , delivered Thanos and showed why he's the most feared villan and loads of funny moments which was great and some shocks too that I didn't see coming.

Well worth the 10year wait

He's booked in. 8:30 Monday morning. They won't let me stay with him until he's sedated so he's having to go on his own again. Absolutely dreading it. This is the entire reason he needs to be sedated in the first place.

She is due to have stitches removed next week.

We have been doing shortened leash walks and closed off the side/back yard where the squirrels are as an attempt at reduced activity. Being warmer weather, we are encountering certain 'psyco" dogs being back outside in their yards, which means Sky then pulls like crazy.

I have a call into the vet. All seems to have been going well with Sky's recovery except tonight she stopped for a second poo which started out normal enough, but ended up looking like a stringy pink mucus strand which ended in a pile of gray looking mucus. I don't know if the pulling to get past the dogs was an issue, but it didn't look bloody, and no evidence of blood around her stitches.

They said the vet may not call back until tomorrow. I saved the collection bag just in case.

Sirius has been doing really well with her walks, but did take exception tonight to a man standing with a grocery bag in his hand and talking to a person in a parked vehicle. I had shortened up on her leash and moved her over off of the sidewalk and into the adjacent yard with me between her and the man. She was far enough away to not do any harm, but not far enough away for her comfort. She gave the guy a bit of a scare.

Grammy to Sky and Sirius, who came to live with me, stole my heart, and changed my life forever as I took over their care and learned how to be a dog owner.
Top

MPb what a worry for you. I hope all turns out well. We can't help but worry even though it does no good. Hugs to you and make sure you have plenty of comfort food available.

Lotsa, I love those photos of the flying and swimming Merlin. I wish you both the best of news on Monday, and a considerate vet.
A dog is never bad or naughty - it is simply being a dog

Went to the Penn Vet working dog conference last week. It was a marathon of information, but ooohhhh so fun! It really got me excited for possible future SAR/HRD training. Dogs are incredible.

I'll probably post my abbreviated notes (to send to my coworkers) here once I type them up, but one thing I found super fascinating was the work the center did with a few of their dogs. These dogs had signs of loose hips as puppies -- sloppy sits, difficulty with coordination, reluctance to do certain tasks. They evaluated them with PennHip and found that yes, they did have bad hips. So the center started doing careful and controlled exercises with them to focus on strengthening the hip joint (and not neglecting the front end of the dog!). After several months, two of the three had improved dramatically from "at risk" to "low risk" of hip dysplasia. The third dog had asymmetrical hips -- one fine, one loose -- and his x rays before and after were almost identical. However, he does not currently have any symptoms except the rare skipped step during walks over cavalettis. One of the dogs now works as a dual-purpose police dog (narcotics detection and criminal apprehension) and returns to the center regularly for check ups on her hips. She is doing well! The other dog is still in training and doing well.

It's not a large sample size, but compared to the general population of that breed that had evals done at the same ages, the improvement was out of the ordinary. They're working with the AKC Canine Health Foundation to find more dogs to try this exercise program out with and ooooh it's exciting! If there is a way to really help reduce the effects of hip dysplasia from an early age, it could change so many dogs' lives. Possible drawback of people not paying as much attention to the genetic side of the issue, but there are always drawbacks to things.

Leslie McDevitt also talked about reactivity in working dogs, and today I started incorporating some of her ideas with a reactive Bouvier I've been working with and making slow success with. She was nearly a different dog! Again, a small sample size, but with how calm she was near the scooters and skateboards she'd previously hated strongly, wow. A skateboarder even went past about six feet from us (caught by surprise -- he hadn't been skating in the park, but appeared from behind a structure 30 ft away about 15 minutes after we started working, and we didn't have time to get further away) and the normally barking growling lunging dog only jumped half-heartedly at him.

I'm excited to continue with this and look for more stuff by her on reactivity, beyond what's in Control Unleashed (as it seems she's added some new things to her program recently!).
Delta, standard poodle, born 6/30/14
Top
Post Reply
3366 posts