Merlin has officially torn his Cruciate Ligament and we are hoping that with 10 more days of heavily restricted activity we can fix it without surgery. I asked the vet and he said swimming is absolutely fantastic for it. Naturally we looked around different Hydro centres near us which were either only open three days a week or costed a fortune. So since Merlin hasn't had surgery, so he doesn't need specialised care just some restricted exercise, we made a decision. We bought a huge paddling pool in the middle of winter! Almost double his height so it should be easy for him to swim, and big enough he isn't just stuck in one place. 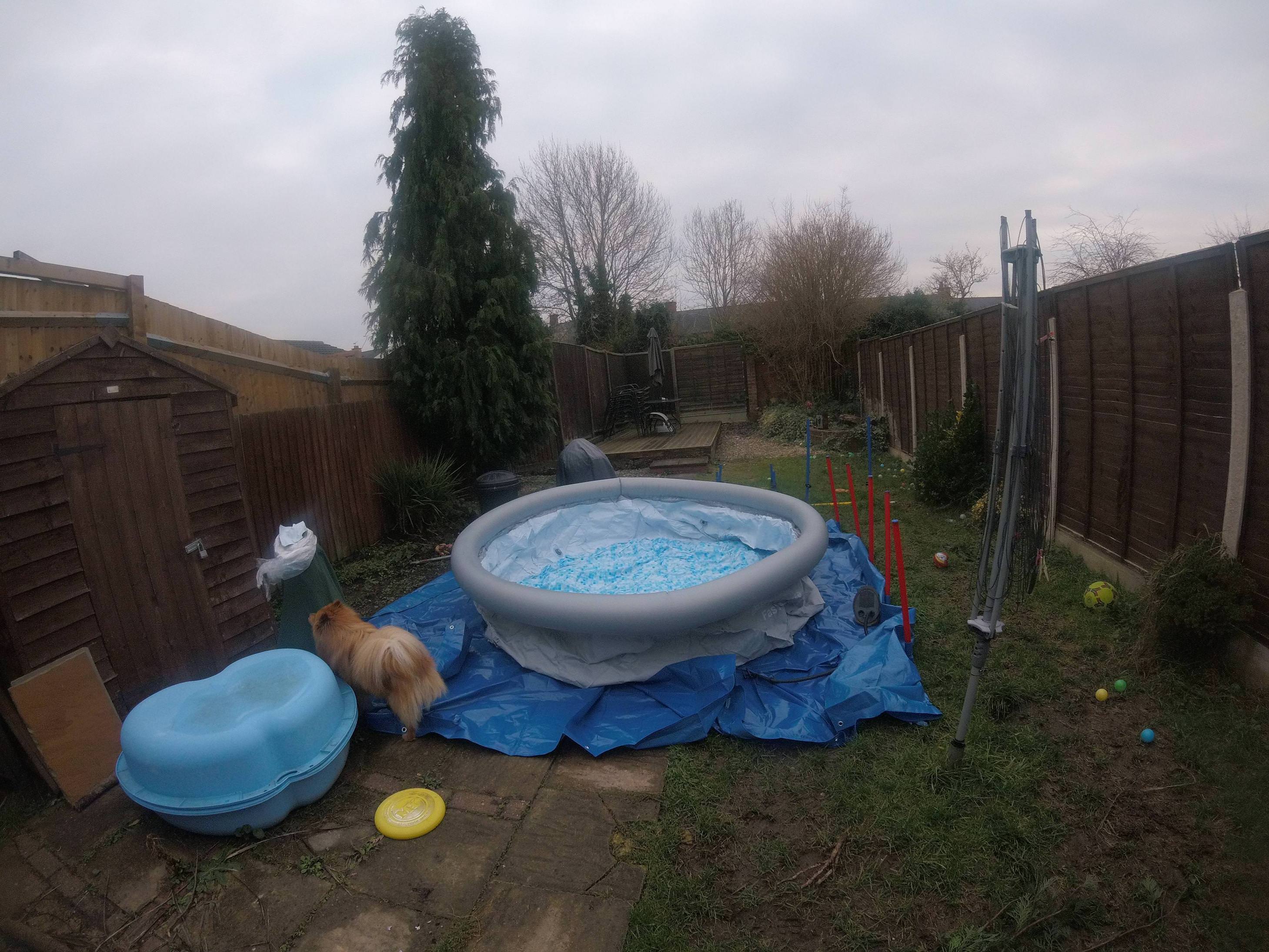 Excuse the state of our garden, Merlin has been redecorating it since we moved in. Going to gopro our progress, including the eventual swim in warm water (our heating bill is going to be fun). Anyone have any tips? We have bought him a lifejacket so he doesn't panic, and I'll be in there with him. I've heard 2-3mins then rest, then 2-3mins more then thats it since it is equivilent to a 5 mile hike.

Aw look at that bushy tail

. Someone more experience will give more help but I found this link that might help https://positively.com/dog-wellness/exercise/swimming
Top

I had a b itch with a severe cruciate ligament injury come almost right (never 100% but she was 7 at the time of the injury) without surgery and with a lot of paddling, so you and your vet are on the right lines.

I would say with all my heart less is more so be very very careful not to overdo things. Each injury/each dog is different, so be guided by your vet. It is not a case of the more paddling the sooner he will heal - he can only heal at his own speed, but nothing will be lost by taking things slowly.

We did:
4 weeks of total rest except out on a lead for potty breaks
4 weeks of 6 ten-minute strolls on-lead per day
4 weeks as above plus a course of acupuncture
THEN 4 weeks of walking up small streams for 5-10 minutes once a day working up to 4 times a day, her normal walks stretching out gradually to half an hour each time.

She was also on homeopathic RRA for 6 months. Ask if you need to know more about this. Not everyone likes homeopathy so I'll only go into details if you intend to use it.

Your paddling pool idea is great and should work well. Remember not to do anything which will tempt him to jump or twist.
A dog is never bad or naughty - it is simply being a dog

. Love the meerkat canvas in the background of got s canvas of sea otters as I'm obsessed with sea otters

It was a DISASTER! Oh god it couldn't have gone worse. Turns out he hates swimming in clean, warm water. He clung to me the entire time, started crying, then I took him out and immediately he went FULL ZOOMIE all over the house. He was jumping, twisting, leaping, the works. I managed to grab him and put him in the hall as soon as I could, but he thought me chasing him was a fantastic game so he was turning and twisting to dodge me. Oh god I hope I haven't made his leg worse. Basically everything the vet said NOT to do, he did, in ten seconds of sheer madness.

Going to give just paddling a go tomorrow since I know he does like paddling in paddling pools, and then I'll just take him straight into the hall until he calms. Spent the entire day trying to keep his exercise as low key as possible and then this happens.
Top

That's such a shame. Did you take him in on a harness? I was wondering if he went in wearing a harness you could easily hold on to, then you could walk him around in that until he calms down again afterwards.

Would it be worth having a couple of sessions at a hydro pool, to get him used to it and maybe pick up some tips from the professionals?
Jasper, lurcher, born December 2009
Top

He had his life jacket on to begin with, but I took that off to see if he just didn't like that. When I brought him in he had nothing on him

I initially wanted to take him to hydrotherapy, but the one I would trust near me (within Merlin's driving comfort range) is only open three days a week. I might see if I can get him in on saturday, sunday and monday just for at least some swimming. I don't really have any other option open to me. An underwater treadmill would be ideal right about now, but the nearest one of those is over an hour away!
Top

Since he's a nutter, I've given a leg brace consideration. What do you guys think? Even trying my upmost he will jump up and twist on occassion, even if its just chucking a toy around and catching it.
Top

That's got to be a question for your vet, I think (unless anyone has direct experience). I can imagine it could go horribly wrong.
Jasper, lurcher, born December 2009
Top

so i can only speak as far as treating PEOPLE with ACL and PCL injuries (i work in people physical therapy) but i can say a few things on them.

If the ligament is COMPLETELY blown you cant fix it with bed rest. if its just torn a little or mildly injured your odds are better.

the TYPE of leg brace would depend on WHICH cruciate he tore, anterior or posterior, i might have missed it but i dont think you specified.

With a COMPLETELY separated ACL the leg will always be weak and prone to giving out even if it heals 100% right so consider the precautions against running like a lunatic and lots of twisting as semi permanent? He also may pull the surrounding ligaments more readily so that leg may get injured more easily as his other ligaments try to compensate for the missing one. but you didnt say if the ligament is fully separated or just torn a lil sooooo maybe not?
Baxter (AKA Bax, Chuckles, Chuckster) Rat Terrier, born 01/16/13
Top

The vet didn't tell me much about it. He said he's 'pulled his knee' then specified the cruciate ligament. On the last examination he did the drawer test and said he's definately hurt his cruciate. He asked to see Merlin walk, and Merlin walked fine, so then he suggested 7 days bed rest and see him again after that, then probing deeper if its not healed after 10 days. He seemed fairly confident it would only take a few days to heal, but me being me I've been reading every horror story on the net and they all agree it takes months...

I asked about the need for surgery, but he said with dogs under 20kg they can heal on their own. He didn't mention he wouldn't not heal back to full use... If that's the case then maybe surgery would be better. Such a horrible thing to happen to a young dog, was quite weepy about it last night.
Top

One of the purposes of pain IS to self-limit, which is why painkillers are not always a great idea. Unless the animal is in agony, it is often better, my vet agrees, to let the pain do its job. You and your vet together can work at this. A lower dose of painkiller, or less often, may be the way. Remember vets see only sick dogs, so unless they keep their own, they have limited experience of well dogs, and a dog with a leg injury is 75% well!

Try your dog wading rather than swimming, and work up to deeper water gradually. The water resistance on the leg is what strengthens it, and you don't need much water for that. But it's early days yet.
A dog is never bad or naughty - it is simply being a dog

As long as he can get back to running around, exploring, and playing with dogs without pain I'll be happy, whichever will get us there. I would prefer to avoid surgery unless surgery has a better outcome. He is at his happiest when he's off running and exploring through bushes and woods. I've already shelved agility or flyball as a probably not, unless he joins in on low impact just for fun.
Top
Post Reply
20 posts