First Sled Run of the Season

First Sled Run of the Season

We finally got enough snow to safely run the trails on a sled, so I took a team out yesterday. They did a nice job overall, though Nels (in wheel) keep crossing the gang line to crowd his running mate, Beau.

I captured the run on video, and excerpts give us about 8 minutes or so of entertainment.

https://www.youtube.com/watch?v=hRrlViZ ... e=youtu.be
"Once infected with the mushing virus, there is no cure. There is only trail." - Sven Engholm
Top

I haven't thought about anchors (to prevent the sled from moving forward when stopped) on a sled before, but of course it makes sense. I assume you have to dig out a fair bit of snow at times (like near your gate, and elsewhere)?

The journey of a thousand miles begins with a single Sit.
Top

I have to dig out the gates on the pens every time it snows (an issue I hope to resolve next summer). Good fences may make good neighbors, but bad gates will drive you nuts. The issue I've had with the gates in the perimeter fence around my kennel is that snow tends to pile up around them, making them at least inconvenience and sometimes all but impossible to use. I don't like shoveling snow any more than the next guy, so I've been trying to come up with a way to alleviate the problem.

I built my gates to be very lightweight, with frames of PVC pipe and hung on a pintle/gudgeon system that makes them easy to remove. That made it easier to shovel snow out of the way most of the time, but wasn't quite an ideal solution.

In my mind, the ideal solution would be a hinging system that would allow the height of the gate to be easily adjusted to accommodate the depth of packed snow. I think I might have finally gotten in right.

It is still technically a pintle/gudgeon system, but now the pintle is a 3/4" post not quite as long as the gate is tall driven into the ground. 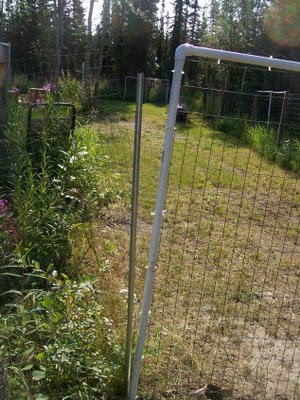 The gudgeon is the gate's 1" PVC frame. A "T" fitting allows me to slide the gate down over the pintle, creating a hidden, full-length "hinge" on which the gate can swing. 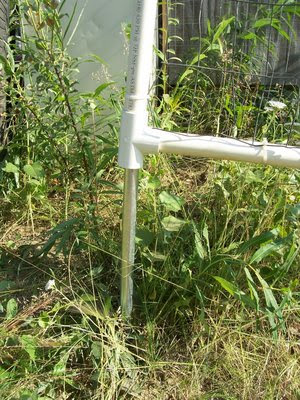 As the snow deepens I can just lift the gate on the post until it's clear of the snowpack, and swing it open as originally intended.
"Once infected with the mushing virus, there is no cure. There is only trail." - Sven Engholm
Top

The snow hooks work reasonably well if the snow is well packed. In loose snow or if the snow pack just isn't deep enough to hold a hook, one can hook around a tree to hold the team (usually) long enough to also tie a snub line around the same or different tree.

Although essential for the safety of the dogs, snow hooks are the most dangerous part of mushing. Imagine that damned hook digging into soft body parts and you get the picture. Dogs can sometimes "pop" the hooks by pounding into their harnesses and dislodging it, at which point it's a mad grab for the sled as it's passing by.

So, NEVER trust your snow hooks. NEVER walk behind a sled that isn't properly snubbed and if the dogs do pop the hooks (I almost always plant both of them) don't forget that the damned thing is likely flying through the air in your direction. They do work best when the team is tired enough to willingly wait.
"Once infected with the mushing virus, there is no cure. There is only trail." - Sven Engholm
Top

Very interesting gate construction. Since we build our own gates here, usually out of wooden 1 x 4" picket boards, I am curious as to how the wire is attached to the frame. That would be a much lighter weight gate than what we have. I am also curious as to what type of latch you use with the gate.

We are looking to add a gate to our back section. We have 4x4 posts 8' apart with 1x6 boards top and bottom with the wire sandwiched in between. Due to the slope of the yard, my son cut the wire in between one of these 8' spans in order to remove a "bubble" in the wire. That cut was secured with Zip ties that I don't trust to last all that long. It falls in what would be a good spot to put a gate, except we need to dig a hole to plant another post for the other side of the gate. Something we have been hoping our sons will do when they rent an auger to dig the remaining holes for the back fence.

Driving a pole into the ground and mounting a gate similar to what you have, might be a quicker and easier alternative.

I haven't had Sky out for a run all month. I am hoping to get back on the canal in January.
Grammy to Sky and Sirius, who came to live with me, stole my heart, and changed my life forever as I took over their care and learned how to be a dog owner.
Top

The fencing is attached to the gate frame with copious bits of tie wire (aka baling wire). You can pick it up in any hardware store. It has to be replaced about once a year, but it generally does the job well enough.

I had to use snowhooks, snub-lines, and pretty much all the luck I ever had in the world to deal with a MAJOR tangle just a bit ago. Today's team was all of the working dogs (not retired) who haven't run in the past two days. My most experienced leader, "Just", proved he needs another dog beside him to give him the confidence needed to pass an oncoming team. I really should have seen that coming (sigh). I had Friday and Chetan in swing. I should have paired each of them with a more experienced dog. I had Maggie running beside Grace, which didn't cause a problem, except I decided I'd try to run Aumaruq in single wheel.

A single wheel dog doesn't turn the nose of a sled around obstructions as well as do a pair. After scraping a few trees I decided to hook and snub down to move Grace back behind Aumaruq. That's when I figured out that Just didn't want to hold a 'line-out' (pointed up the trail) long enough to do the task. He wanted to come back and visit. Of course I did not have a leader hook along with me, either. (That's a smaller snow hook that can be used to help a lead dog remember to hold the gang-line out during a stop).

I barely got the team moving from that when we had the head-on pass from hell with a neighbor's race team. Just didn't want to pass, Friday, Chetan and Maggie all wanted to visit, as did several of my neighbor's dogs. The next thing you know the two teams were tangled up together in a messy mass of writhing, tail-wagging knot of lines.

Of course, Just wanted to come back and visit, only to make things even more "interesting".

I was finally able to get my neighbor's leaders untangled from mine so he could drive one by. He offered to stop and help with my mess, but I declined. There really wasn't any place he could safely hook down and snub his team and I really didn't want to have to try to clear my mess only to give chase and try to find a loose team of dogs. Just (bless his stinkin' heart) wanted to chase Rod's team, and when all of that was figured out my sled was sitting cross-wise in the trail, my team all balled up on the wrong side of it.

I decided the best approach would be to go ahead and reverse course, rather than try to get everyone facing uphill again.

Somehow, and I have no idea how it was even physically possible, the gang line got woven in between the lines to the two snow hooks, the snub line, and the bridle of the sled.

It took me a solid 15 minutes to sort it out. First, every dog had to be untangled from lines to prevent injuries. That had to be done without releasing dogs so they had to have a least a neck line or tug line snapped to his or her collar. At one point Chetan slipped her collar and did not have her harness clipped in, but she stuck around and was very polite while I put the collar back on and snugged it up as best I could. FINALLY I did get it sorted out, and discovered that one of the brackets to my drag mat had snapped. Nothing to be done about that but drive the team home anyway.

Fortunately, we DID make it home. No injuries to dogs are humans. Only minor damage to the sled that will be easily repaired.

Maybe I'll laugh about it later tonight, but at the moment I feel like an incompetent, bumbling fool.
"Once infected with the mushing virus, there is no cure. There is only trail." - Sven Engholm
Top

Holy smokes. That sounds like my brother and me fishing, but with waggy tails

. I'm voting it'll be a look back and (maybe) laugh moment.

Cheers.
The journey of a thousand miles begins with a single Sit.
Top

Dear Heaven, Swanny, you did really well there. It may have cost you a bit of sweat and swearing, but nothing happened. I often think that after a drama (mine are nowhere near as spectacular as that one). What happened? Nothing happened! But plenty could have.

One for the memoirs for sure. Glad everyone is okay.
A dog is never bad or naughty - it is simply being a dog

Wow! reports like this make me a little more glad that I only run 1 dog.

Really, I often wonder how it all seems to go so smoothly with those multi-dog teams. I suspect good solid line out training plays a large role. (Something I still haven't done with my two, so who am I to talk

) Maybe Just just needed to work out some early season brain wool and he will be lining out like a pro next time. Glad all were able to get home safely. It sounds to me like a future, good, entertaining, laughable tale to tell.
Grammy to Sky and Sirius, who came to live with me, stole my heart, and changed my life forever as I took over their care and learned how to be a dog owner.
Top
Post Reply
9 posts • Page 1 of 1