When he was basking in the sun today, and panting a little, I noticed that Jasper's gums towards the back of his mouth looked red, with a redder line running along the gum margin (one side only). One of his back molars looked discoloured - but I had thought that was just build-up of tartar. I noticed yesterday, after he had some kibble treats, he seemed to be having a bit of a chew as if there was something stuck in his teeth, and OH had mentioned a couple of days ago that he had rubbed the side of his mouth a couple of times - we had thought maybe he was just itchy.

Normally he'll let me have a quick look at his teeth but if there's any chance he's in pain I really don't want to go there....

My plan of action is to try to get a photo of that side, and of the other one for comparison purposes, and show them to our vet. It's not as if the vet is going to be examining him before putting him under so if he thinks there's a problem, that is what will have to happen.

In the meantime, though, he's not shown any grouchiness with ear fondling and so on, or in any other situations, and he's chomping through his daily carcasse as fast as ever. I've not noticed bad breath either. When he had to be sedated back in November, the vet checked his teeth and said they were lovely - nothing but a bit of scale. So I'm wondering - is there a chance that he's in discomfort right now, or (bearing in mind this is Jasper) would it have been obvious?

Looking online, I think this might just be gingivitis. If so, given that I'm not sure how well he'd take to having his teeth brushed, is there anything else I can do to deal with this and potentially avoid him needing to be put under? (Which screws with his mind something rotten and is intensely stressful for all of us!)
Jasper, lurcher, born December 2009
Top

I think I panicked yesterday with the thought of Jasper with toothache and the joys of going through treatment... 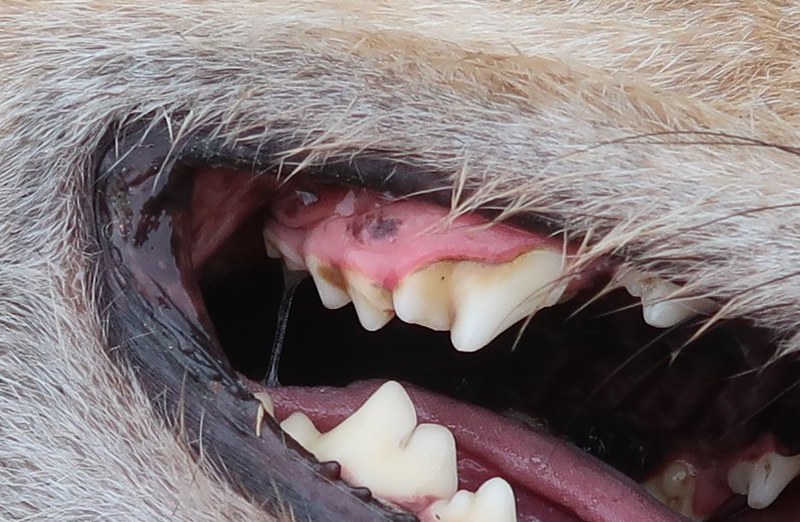 Maybe it's just down to it being overcast today, but it looks a lot less red than it seemed to yesterday. Just possibly, I've got my rights and lefts mixed up and this is his good side, but I hope not

I'd be happy with that side. He may have just scraped a gum on something.

Normally - and I do appreciate this is Jasper

raw-fed dogs only get a small amount of soft tartar on the upper canines, and many don't even get that.
A dog is never bad or naughty - it is simply being a dog

I need it to get hot and sunny again so he can lie in the sun panting!

I'm going to get some dog toothpaste and have a go at brushing them anyway. I did it in the past and once I found a toothpaste he didn't spit out he didn't object... though he didn't make it easy as he just wanted to chew the brush/lick my finger depending on application method.