I know lots of people on this forum don't like neutering a dog too young, but we, on advice from our trainer who is also a behaviourist, decided it was time for Merlin. He almost got himself killed twice trying to track down female dogs, bolting off over roads and the length of fields. After that he lived on a longline and he just spent every walk at the very end of it scouting for dogs, sometimes not even taking food. He would turn his nose up even at his favourite (lamb's liver cake) so I can only assume he was just stressed being outside.

His dog obsession hit a new high. With the girls it was supersonic squealing, with the boys it was either ignore (yay!) or go full macho barking and growling (boo). He spent entire days pacing, whining and barking to go out for walks, we were taking him out 6-7 times a day with some of them 2-3 hours long of field walks. He was exhausted, but he just wouldn't settle and would just pine next to the front door or any door that leads to it if we blocked it off.

So, at three days shy of ten months old, he's been done, and now I want to make sure I do everything I can to make him happy. So I was wondering if anyone has any tips or tricks to make it easier on him for the 10 days he's not allowed to run about? We bought a buster inflatable collar instead of a cone, but he's pretty miserable in it. Is there any other way you can keep a dog from licking the wound?
Top

You could try putting some (small, children's?) boxer shorts on him back to front, so there's a gap for his tail? If you do that, we NEEEEEED photos, mind!

If you're able to distract him when he licks, the odd lick now and again won't hurt. Depends if you can stop him once he's started. Lots of mind games, obviously, but also long gentle sniff walks, unless he's likely to lunge and leap around like a kite in a strong wind.

I once tried rubbing peanut butter on one of J's paws to stop him licking his injured one. It worked for a bit

They do adapt to the collar in time. At first J would bump into things and then just stand motionless, seemingly unable to go backwards or have another try at negotiating the obstacle, but he got more used to it after a day or so.
Jasper, lurcher, born December 2009
Top

I tried to take his collar off and just keep an eye on him, but he went right in to lick the wound and I had to hold his head firmly away from doing it, he was very adamant! He's back in the collar now. I think I'll give the boxer idea a go, he's barely stood up since his operation (yesterday) and I think a large part of that is because he thinks the collar is the devil.

How long after Jasper's neuter did it take for him to perk up a bit?
Top

I honestly can't remember, it was a long time ago. Though typically boys are back on their feet and full of energy within a day or two. Some dogs can react to the sedative/anaesthetic differently to others though, so Merlin may well still be feeling out of sorts. I hope he bounces back - and is bouncing around - again soon!
Jasper, lurcher, born December 2009
Top

Well, he's over his 'I HATE THIS COLLAR' now and he's been trying to run and jump around the house since 4am. I'm glad he's feeling better but my god am I exhausted! I ordered a recovery onesie that should arrive today, not sure he really needs it now but I'll give it a go (and take pics ofc). The boxer idea was a no go because he's pretty sensitive about his Spitzy tail since he holds it so high, hoping a onsie made specifically for dogs who have had surgery will accomodate his tail

I bought something called a 'tug a jug' which came with great reviews. Unfortunately I think I'm doing it wrong, or filling it with the wrong things, because it seems almost impossible for the dog to get the food out. I mean, it takes me a while and I have thumbs! Wondering if anyone has tried this before?
Top

Yup, I have a Tug-a-Jug. Jasper couldn't do it either, so I took the rope out altogether. That made it a lot easier!
Jasper, lurcher, born December 2009
Top

Kite in strong wind describes him perfectly on a lead unfortunately, Judy. We took him out for a supposed 'gentle sniffy walk'. Instead it was a maniac lunging in every direction that leads to the holy park, he also really went for a dog which was pretty upsetting to see. At the end of his lead growling, barking and just being really angry. I am hoping that is just an after effect of the operation and that I haven't just made a monumentous mistake. I would prefer a dog obsessed dog to a dog aggressive one.

One positive he still LOVES the vets, though the receptionist wondered if they actually got his balls since he was just bonkers with excitement.

He's now barking at our christmas tree because he bit it and it spiked him so now he thinks it needs telling off. It is going to be a long ten days...
Top

Could be the after-effects of the anaesthetic, or could be a reaction to the stress of it all - however much he likes the vet he'll know something has happened, and he's also had to deal with the horrible collar. Also, it will take weeks for the hormone levels to fully drop off.

A full week after J had a gash on his shoulder stitched up, when he seemed to be fully back to normal, OH and I went to leave the house together at the weekend. He's always been a bit more iffy at being left during the weekend than when I go out during the week, he went mental, and was using menaces to try to stop us leaving the house

The following weekend he was fine - he'd never done that before and never done it since. So they can definitely have 'funny' reactions to sedatives/anaesthetics that can last for a while.
Jasper, lurcher, born December 2009
Top

Merlin is a pretty sensitive dog to most things (heavily into routines and gets really stressed when its broken) so it is comforting to know that Jasper went through a funny bit after an op too that didn't stick. For now I won't panic and just keep him calm and happy, if that is even possible...

I think I'll try and get him back into a fake version of his old routine. Still goes out in the morning at the same time, but instead of the blessed land of dogs and grass he'll have to just spend some quality time with the lead anchor. I've bought a mini scateboard and a toddler wagon to keep him entertained learning new tricks, hoping learning to push and pull moving things will cheer him up a bit.
Top

As promised, the onsie: 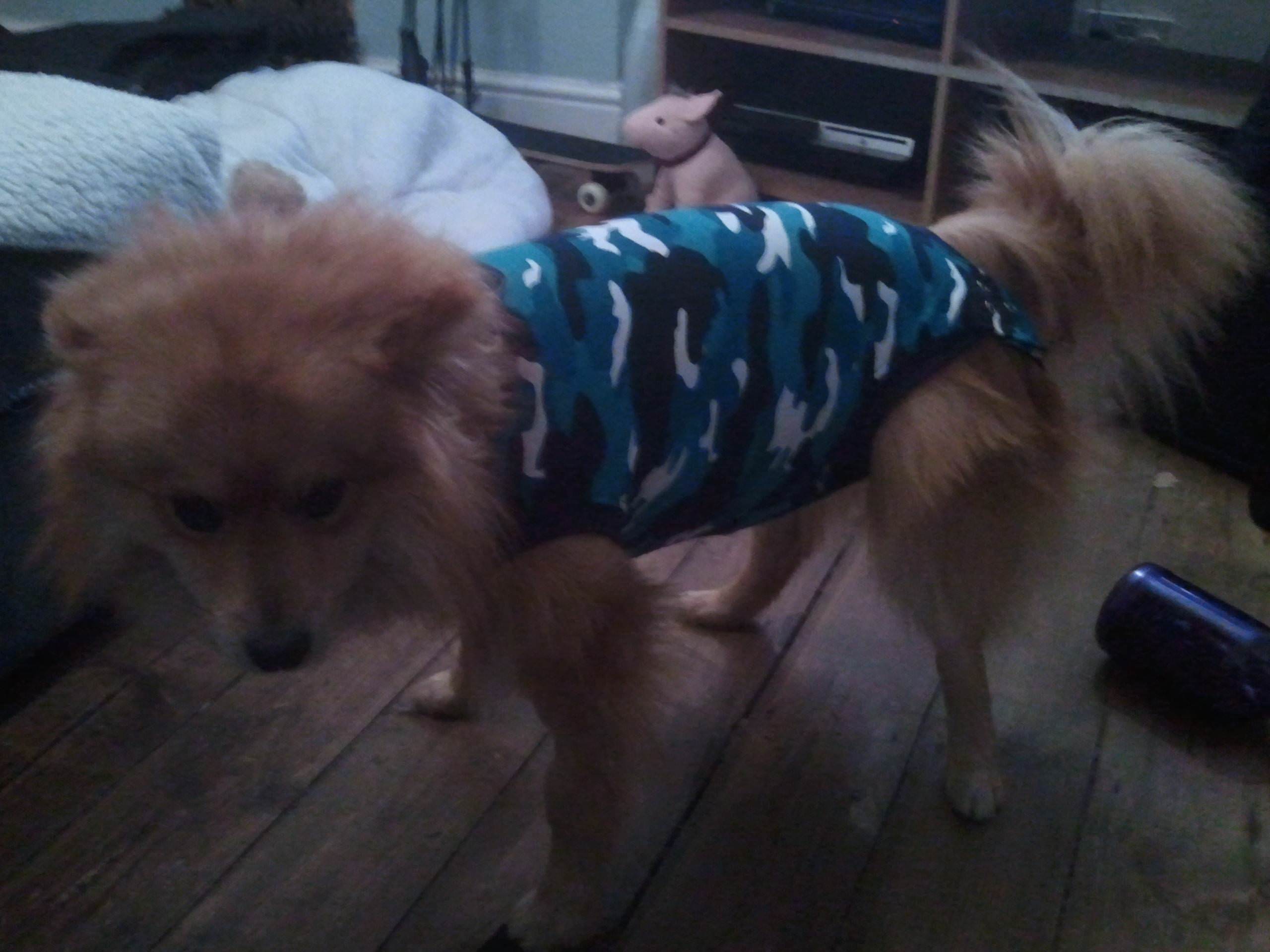 The onesie didn't last long. He is now shoving his head through his inflatable collar when I need to put it on, I think he now sees it as a travel pillow! I don't recommend the onesie to anyones dog except for sheer comedic value.

Also what a difference a day makes. He saw five dogs today despite my best efforts of walking at quiet times. Two barked at him, one was off lead (they like to make my life difficult I swear!), and one was a collie (one of his top ten fav dog breeds he normally goes crazy to play with). He never reacted once, in fact, he was SO attentive to me I was actually shocked. Normally I'm a weight dragging his roaming down and cramping his teenage style, but today he was playing with a toy I brought out just to give him something to do, and was really, really enjoying doing little tricks. Probably a bit too much since calm walk went out of the window and was replaced with 'OMG WHAT NEXT?!? OMG I JUST LURV TO TWIRL!'

I know its too early for the operation to have had any huge effect, but it was just nice to see him just be happy after weeks and weeks of restlessness and hormonally charged stress. He's not once paced and whined to go out on a walk despite not being off lead, and he's decided he does actually like a bit of a cuddle (which I absolutely hope sticks around! He's so fluffy and warm

I have unfortunately noticed his guarding is flaring up, just the subtle signs for now. Burying things he never used to, trying to run away whilst on lead with things he's picked up that before wouldn't be of any value to him. I guess he was so preoccupied with finding girls that nothing else mattered. I saw him drop an entire cream donut just to continue sniffing a scent trail last week, but today a piece of wood was a treasure worth worrying about. All pressure is off him for now, back to basics of random treat adding.
Top

If you have a longnosed dog get the larger size of buster inflatable collar than is recommended. Turns out they CAN still lick their wound, and Merlin has reversed his healing process in doing so. On the plus side, the onesie we paid for is getting use now, and there is not much funnier than a dog trying to act tough barking at birds whilst wearing a camoflague onesie and an inflatable buster collar