Jasper's in the wars... and the mud

Jasper's in the wars... and the mud

We went to the deepest, darkest part of the woods this morning as it's cool and shady, and we don't see many other dogs there. But we do, just occasionally, encounter deer.

Jasper heard something rustling, decided it was a deer, and took off. And instant later, I heard a sudden SPLAT!! followed by silence

When I got to the spot where the splat came from, I found the ground was very boggy there, but I could hear Jasper running some way away. He came back after just a few minutes, and then started yelping & crying

Normally, when he's hurt himself he'll just cry at the moment it happens, or yelp when he walks, so it was a bit worrying.

Naturally, he was now hot and panting, and I didn't want to make him wait till we got to the nice clean stream before he could cool off.... 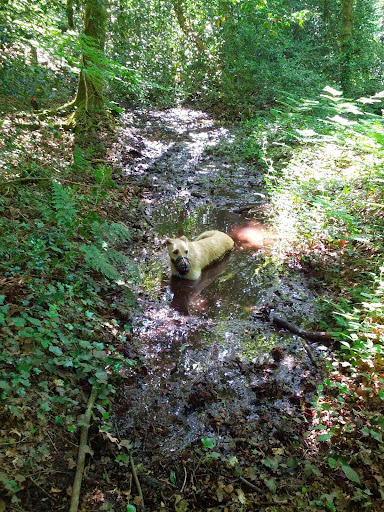 And yes, it smelt as good as it looks 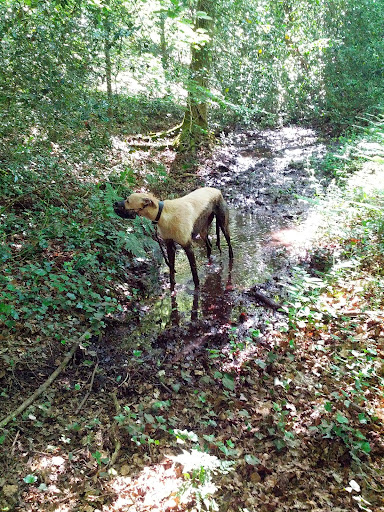 I was just out of range when he shook! 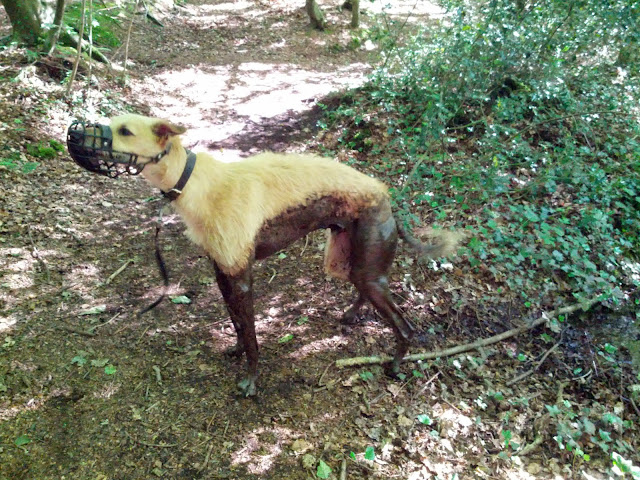 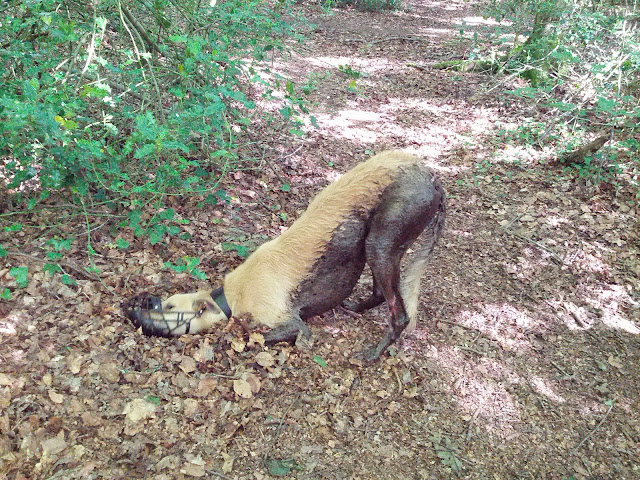 He was limping heavily on the way back to the car, via the stream - naturally, he wasn't interested in lying down in the stream and I didn't really want to make him lie down in case it upset whatever he'd hurt, so I've shut the door to the front room, put an extra throw on my bed, and will be vacuuming in here later

He's whingeing and limping on and off, but I'm sure he keeps changing the leg he's favouring. I reckon he's milking it...

My best guess is that he ran across the boggy ground without realising it was boggy, and jarred something when he sunk in unexpectedly. Not badly enough for him to stop chasing the whateveritwas though!
Jasper, lurcher, born December 2009
Top

Poor Jasper, and you for having to clean him up.

I know it will be hard (wear clothes like a raincoat or those you don't mind throwing out. I have learned the hard way that mud doesn't come out of clothes very well.

But, it concrns me thqt he is limping. Have you checked his legs and feet for any signs of bleeding? That mud could lead to an infection. Also, he needs yo be checked he didn't break anything. So, even a bad sprain may need to be wrapped up.

So, bear the mud and muck and make sure he is okay.

I can't find any wounds on him, and he seems a lot more comfy now - he had a short lead walk this afternoon and looked a bit clunky at the start but loosened up, so I expect at most he's just tweaked something, or bashed something. I'll see if he stiffens up overnight, but lurchers aren't known for their stoicism!

I'm very easy-going about mud. I don't tend to try to wash it off him as dry mud is much easier to clean off carpets than wet mud, and he does dry quite quickly. I did give him a groom outside, though, as he loves being groomed and it got a fair bit out. He's still rather grubby though!
Jasper, lurcher, born December 2009
Top

You are right that dry mud is easier to vacuum up than dealing with it wet.

I am grateful that I have been able to steer Sandy away from mud, but of course, he is always on lead.
He does like to roll in the grass though, and has tried to roll on dirt. He has learned leve it, so when I see mud in the path or him wanting to roll his head in dirt, he has been able to leave it.

Righ now, Sandy is out with OH to find a deserted park for Sandy to use the grass. As I mentioned previously we have no grass in Albuquerque, and at 90 plus degrees F and no shade our backyardn can become like walking on hot coals. It takes just one view of Sandy doing a little dance trying to keep his paws from burning on the hot stones.

Well, here they are. Need to give him his food.

Glad to hear that Jasper is doing better.