There are some lovely dogs in Rescue. There are many many dogs who, with experienced handling, will become lovely dogs as long as the owners can manage their quirks (like you do, Shalista). There are loads of imported feral dogs that will never make good pets, often with bad physical issues as well as mental ones, many carrying diseases that need to be managed all their lives. There are even more desperately unhealthy puppy-farmed dogs that will be a source of sadness, frustration and expense. Some people are happy to manage this.

Some Rescues train their staff. Most don't. Many rely on volunteers who cheerfully undo training as fast as it is done. There are some very sensible people who work in rescue, and some who don't know what they don't know.

So - I'm not saying don't get a Rescue dog. I'm saying that prospective owners need experience with normal dogs first, and backup help available, and the Rescue should be carefully chosen. It does sound as if these particular owners are very inexperienced, especially given that they are choosing prospective breeds on looks, and they would do best to choose something predictable, with proper breeder support, as their first dog.
A dog is never bad or naughty - it is simply being a dog

Thanks Nettle, they are only interested in a puppy for there first dog.

But I agree nettle, I can handle Sampson and Lara because I had a lot of experience with dogs before I regimes either of them, Sampson I was lucky with but Lara has a lot more health issues than the rescue told me about since owning her I have found out she is not only suffering with her kidneys but that she has diabetes, a heart murmur and one of her hips is not great as the vet noticed she walked funny in it.

There now looking at either a Bernese mountain dog or GSD as they love Lara but also when I fostered the Bernese girl they really wanted her but someone beat them too it.
Top

yeah i guess i just move in different circles than you Nettle? I hear cries for help over destructive and violent and fearful dogs they've had since puppies far more than i hear it for rescue dogs.

not that rescue dogs are perfect i just think you might have a better sense of what the end product will be when you meet one.
Baxter (AKA Bax, Chuckles, Chuckster) Rat Terrier, born 01/16/13
Top

My extended family has alot of experience with rescue dogs, and it is 50/50 on if they work out or not. The best dog my close family ever owned was a rescue, but so is their most troubled. My aunt only rescues dogs, one was amazing, another killed all her guinea pigs and escaped, and their current one is a collie who bites their backsides if they are hanging up the washing.

But saying that my uncle's dogs have been a bit nuts, and both they'd had since pups. One was a bonkers springer who was obviously farm bred. Their second has OCD in regards to light/shadows. At least with rescue dogs from a good rescue you can see their adult temperament, so you won't be in for any surprises. Merlin was a sweet puppy from a sweet family, but he's blossomed into a challenging dog with no frustration tolerance that he'll redirect onto my bum/ his lead / a tug toy.

Having said that I really do think that for your first dog, if you are inexperienced, a puppy is the best way to go. Before Merlin we did have a rescue dog for two weeks, but I was so out of my depth and overwhelmed that I couldn't cope. It was basically everything all at once. He was terrible on a lead (slightly reactive and hated intact males - he tried to fight one

), had the energy of a thousand suns (jack russell or patterdale x springer), and would mouth and bite us when he got frustrated. But with puppies everything comes in drips and drabs, so you are able to learn at a good pace along the way. With all I have learnt now, I would have been ready for the lovely little firecracker and we'd have had an absolute blast charging around the nature reserve. Back then I didn't even know where to start with recall!

Here he is, he dug that hole in under 30 seconds. He was bonkers. 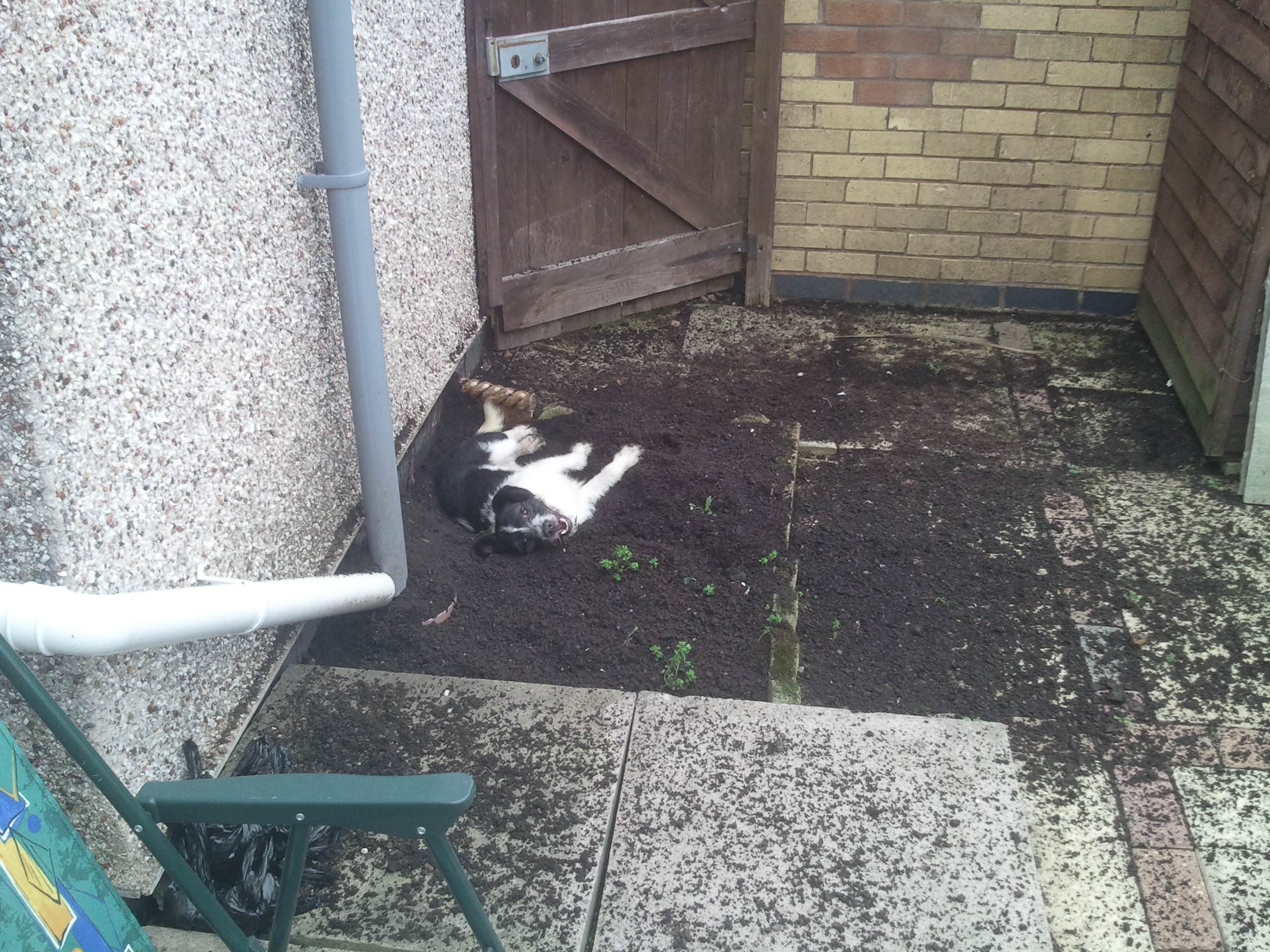 There's plenty of puppies in rescues as so many b!tches arrive pregnant. But then of course you have little idea about the father.
Jasper, lurcher, born December 2009
Top

They have also added the Gordon and English setter to their list.

If you had to pick one of the following as your first dog which would you pick and why.

They said they wanted a laid back dog that won't need tonnes of exercise, but they keep adding high energy working dogs to their lists! Both of those Setters are workers, and their recall is spotty at best. You are talking over two hours exercise with stimulation thrown in, and you might never be able to let them off lead.

I could be totally wrong, can only go off the Setters I've met.

I think they need to be really honest with themselves about how often and for how long they can walk a dog, and where, and go from there. If they have a fully enclosed field nearby then a bad recall dog could work, for example. If their only walks are in wildlife filled woods, maybe not.

I agree with you LOQs , I personally feel the Bernese is suited best as they are laid back and I know a few people who have had them as first dogs and have successfully raised and trained them as there first dog
Top

Well I've met about 6 Bernese mountain dogs (4 at once at a beach, they surrounded Merlin for a sniff. Poor thing was a bit worried... Until one play bowed.

) and they have all been absolutely lovely. One lives just around the corner from me, Womble, he's just a bombproof gem. When Merlin was a jerky teen I walked parallel to him for a bit to try and teach Merlin not to pester dogs. Couldn't have stumbled across a better stooge dog.

The sixth is one I've met a couple of times at a park, just plods up to Merlin for a sniff then plods off.

Of all the ones I've met, I've never ever met a hyper one. Even the young one at the beach was pretty chill and very sweet. I think it would be a good choice for them.
Top

) and they have all been absolutely lovely. One lives just around the corner from me, Womble, he's just a bombproof gem. When Merlin was a jerky teen I walked parallel to him for a bit to try and teach Merlin not to pester dogs. Couldn't have stumbled across a better stooge dog.

The sixth is one I've met a couple of times at a park, just plods up to Merlin for a sniff then plods off.

Of all the ones I've met, I've never ever met a hyper one. Even the young one at the beach was pretty chill and very sweet. I think it would be a good choice for them.

My experiences exactly the same every single was has been gentle and affectionate and very friendly , Sampson and Lara often play with one we see every weekend on our walks.

I have put them in contact with a Bernese owner who has owned the breed for over 20yrs and is happy to talk about the breed but she's very honest about the flaws and normally starts by trying to put potential owners off first as if there still interested and not put off then she tells potential owners all the amazing things about the breed. I know her because she brings her Bernese's to my salon every month.

I have also never met a hyper or aggressive one.

With the hovawart they have said they are not for them after another breeder replied to them and was very honest and said they are true working dogs who need more exercise than a GSD as there is no devide in this breed.

They have now after careful thinking and being honest with each other only have the Bernese on there list and are going to speak to the owner I know and also talk to the breed club and breeders.
Top

Apparently they need quite a lot of exercise though - I've read they need a good two hours a day plus mental stimulation. I guess if they don't get that, they're not going to be quite so docile.
Jasper, lurcher, born December 2009
Top

JudyN wrote: ↑
Thu May 17, 2018 1:09 pm
Apparently they need quite a lot of exercise though - I've read they need a good two hours a day plus mental stimulation. I guess if they don't get that, they're not going to be quite so docile.

They can do 2hrs a day all it is is there looking for a dog whose laid back in the house once been given his\her exercise for the day what they don't want is a dog who is like a Springer spaniel on the go all the time and never switches off. And all the Bernese's I have met have been very chilled like what LOQs said.

But there limit is 2hrs a day and at weekend can give more.
Top

ZaraD wrote: ↑
Thu May 17, 2018 1:13 pm
all it is is there looking for a dog whose laid back in the house once been given his\her exercise for the day

ZaraD wrote: ↑
Thu May 17, 2018 1:13 pm
all it is is there looking for a dog whose laid back in the house once been given his\her exercise for the day

True but not just lurchers, both Sampson and Lara are happy to chill once they have had there exercise. And Bernese's also seem to be like this.
Top

Lovely response to my post LoQ, those are my thoughts exactly.

Dittoing Judy on lurchers and greyhounds.

or.... reiterating my previous point. get an adult/senior.

bax was a bucket of energy a year or two ago but now he mostly just sleeps on my futon. we walk slowly in a stop and sniff for about an hr a day but he doesnt seem fussed if we even skip that because of snow. would he be HAPPIER with more? prolly, but hes not obnoxious or destructive as is.
Baxter (AKA Bax, Chuckles, Chuckster) Rat Terrier, born 01/16/13
Top
Post Reply
34 posts