I've decided to give cording a go with Delta! Rather than being sensible and testing the waters with, say, his bracelets, I'm going whole-hog and doing the continental cut, fully corded. Assuming this all goes well, anyways.

Last brushing was on Oct 21, 2016. The process for cording involves no brushing, just dedicated and vigilant splitting of the developing mats into the appropriate size. Weekly baths are recommended to help the cords tighten up and stay clean. Drying must be done carefully; a high-velocity dryer will straighten the hair and prevent proper cords from forming, but letting the hair stay damp for too long can develop mildew. 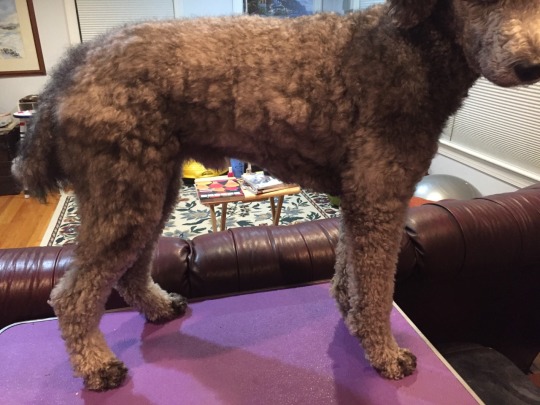 Delta post-brushing. I had already decided to cord his bracelets, so I didn't brush out his legs. After this brushing, I was looking at cording resources and decided to go for the full look. 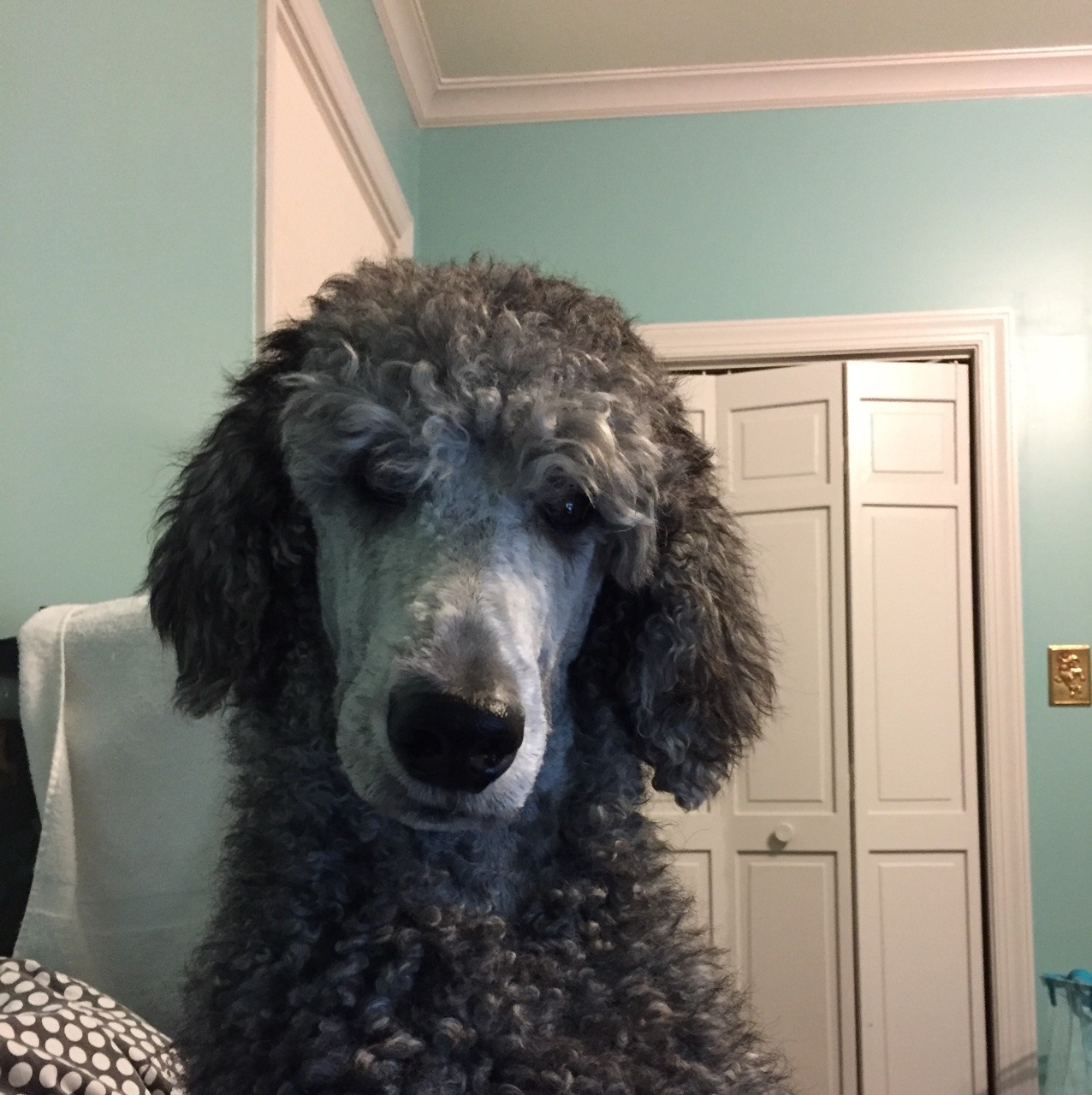 The day after a bath, I did a face/feet/tail trim, and shaved his armpits too (which you don't do for a show dog, as far as I know? but which is recommended for pet dogs). The full continental cut will have to wait for a day when I have a good few hours to make sure I do it right. You may be able to see the remaining long hair beginning to separate into chunks that will form the basic shape of the cords.

No picture, but hair on his head and neck is beginning to form dense, tight mats of appropriate sizes, and I have to keep a careful eye on the fur where his harness sits to keep those mats from joining up into an unacceptably large one.
Delta, standard poodle, born 6/30/14
Top

I've been looking at pictures of corded poodles and I'm sooo excited, even though it may take a year or longer! 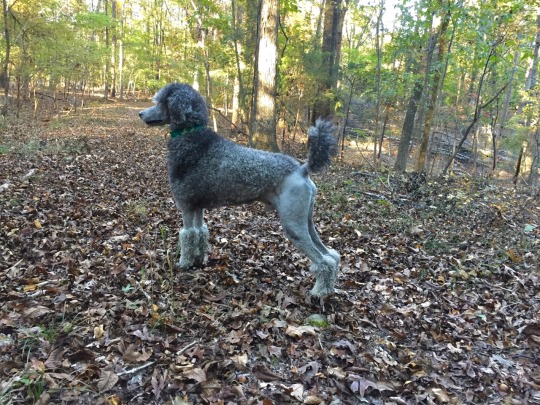 Did a bit of shaving today. I'll be taking a little more off to make it look as nice as can be, but otherwise this is what Del will look like for a while!

Strong but messy cords forming (with a lot of splitting them up) behind his ears and along the back of his neck where his harness sits. I've started putting him in a collar when we go off-leash, to reduce the amount of supervision that area needs

Boy needs a bath soon - I'm aiming for Wednesday morning, maybe. Tail isn't matting yet, but is dividing up very nicely on its own. This is good because he doesn't like having his tail fussed with much

I can't help thinking he'll get a cold bum

I'm thinking of making some fuzzy boxers for him

And since I've got the pattern set, I'll not have to shave those areas down totally again for the winter, just keep them a bit shorter than the rest of his fluff. We are in the South, so it's not as cold as most places get.
Delta, standard poodle, born 6/30/14
Top

So many mats, so much splitting! I hope this is a sign that his coat is well-suited for cording. It's nice to scratch through his fur to find too-large mats and pull them apart while reading or watching a show. He's very patient as long as I am careful not to pull on his skin. Even just petting him normally, you can feel the distinct bases of the cords now.
Delta, standard poodle, born 6/30/14
Top

Six weeks in. Some areas have good distinct cords already (well, have matted tightly enough for me to split them into cords that stay cords); namely, behind his ears, the back and sides of his shoulders, and his tail. I haven't been able to keep up with weekly bathing, which is to help tighten mats/cords up, but am trying to find things to cut out of my schedule so I can do this. I've tried to take pictures but they just look like the rest of his fur so they're boring and pointless.
Delta, standard poodle, born 6/30/14
Top

Nevertheless, thank you for this update. I am finding the information fascinating.

I second what Nettle said. I enjoy these updates!
And Delta is adorable! I love that cut on him! He is very handsome!!!!

The cording sounds like it is a lot of work, but I am not sure if it is less or more work than what you are use to...
Top

It's usually considered more work to start and maintain a corded coat than a brushed one. However, I separate his cords while I'm watching a movie or reading a book or such, so it's less of a specific time commitment for me than brushing, which I need to keep a comb around for and usually requires more attention from me. While I find the corded coat to be better for my lifestyle, it really depends on the person!

The baths are the tricky thing. I was going to bathe him today but it's raining outside so he would never dry. I'll have to wait for a dry day when I have time to do that :/
Delta, standard poodle, born 6/30/14
Top

I don't think I've had a chance to bathe him since last time I posted. There are three showers in this house, only one of which has a detachable shower head, and which thankfully is also the one on the ground floor. But at the beginning of December, my dad took up the floor with no warning in order to refloor it. So I never got to give Delta a bath. Finally he's finished (well, finished enough to use the shower for a dog!) so tomorrow will be bath day!

Delta's cords on his shoulder area are pretty well-formed, as are the ones on his tail. They don't look much like cords yet, but once you part the outer layer of fur they have distinct bases and are not willing to be pulled apart easily

They also stay more separated than they did in the beginning. He's starting to mat strongly on his sides now, so I'm dividing those up as needed too. Waiting on his legs and head to catch up! His fur is about four or five inches long.

Will get a bigger one uploaded soon but: It's very hard to take pictures of cords in progress! They all end up looking flat and just like normal fur.
Delta, standard poodle, born 6/30/14
Top

*sigh* I guess it figures that just as Delta's coat is really separating into beautiful cords, he decides he's done with the whole thing. When I pet him he looks tense, and if I start separating even a single pair of cords he moves away, even though it's now at the point where there's usually just a hair or two that need neatening out in the portions of his coat that have corded up.

He has always been pretty sensitive, disliking average weight harnesses and preferring smaller than usual straps. It's not too much of a surprise that he's started showing me that he's unhappy about having even little tugs on his skin.

We do have a vet appointment soon, so if the tenseness doesn't go away with the cords, I can get them to check him for any other sources of discomfort.

I'm gonna get some pictures of the progress before I do any shearing. I think I could still brush out his topknot and leg poms without any pain or distress on his part, maybe just a couple chunks to chop. They haven't corded up at ALL. The rest is a bit loose at the base so I may be able to fit something longer than a #10 beneath the base of the cords.

His tail I will leave corded -- it's very neat and the cords don't get tangled quickly, even at the base, so it's very low maintenance. He strongly dislikes my brushing his tail out at any length or even if it's all perfectly brushed out. It was his dislike of tail brushing that made me consider cording him in the first place

While he doesn't like me playing with his tail cords, it's less than his dislike of my brushing it out, and checking the cords for separation takes much less time than a good brushing.
Delta, standard poodle, born 6/30/14
Top

That's very interesting. I suppose it's like us having cornrows in our hair - it isn't all that comfortable. And as he's a sensitive flower, it might tug and tweak randomly. He's lucky to have you as an owner because you take note of what he's telling you.

Probably! Some poodles look like they're going to fall asleep while they're having their cords separated. Delta is not one of those

I brushed out half his topknot and I must admit that I missed the fluffy cloud look too.
Delta, standard poodle, born 6/30/14
Top
Post Reply
20 posts