Good luck on getting a dog to like the car, I've never managed with Merlin. A few things have made it more tolerable for him so he no longer pants and drools though.

Have a stiff, but comfy bed for him to sit in. The sides had to come up quite firmly so he feels enclosed, but he hated the crate.
Give him some ginger nut biscuits an hour before travelling (tried all sorts of travel sickness / fear things, ginger biscuits worked best).
Top

tried crates but he hates them. he wears a seat belt harness and doesnt seem affected wether i bring a blanket from home or not. tried homeopathic calming pills as well as travel pills, neither mattered. tried thunder shirts, he hates them.

as far as treats have worked ican get him to stretch his neck into the car for a treat but thats the farthest we've gone. not a single paw has gone inwillingly.

the good news is that due to his work at the nursing home i can confirm that he doesn't really mind being picked up. i thought i might need a ramp to get him to walk into the car but i think he'd be okay if we worked up to me picking him up and putting him in manually. i dont think that will cause him any stress and he can eat a quick treat or two and then hop out.
Baxter (AKA Bax, Chuckles, Chuckster) Rat Terrier, born 01/16/13
Top

Blankets etc: didn't work for us either, but a dog bed did. You can customise it so the seatbelt tether goes through it.

We use something similar to this; For some reason it settled him where crates etc: didn't. He will jump in and go straight over to his bed and just sit in it for the whole journey now, no fussing.
Top

Lotsaquestions wrote: ↑
Sun May 13, 2018 2:52 am
Blankets etc: didn't work for us either, but a dog bed did. You can customise it so the seatbelt tether goes through it.

We use something similar to this;

For some reason it settled him where crates etc: didn't. He will jump in and go straight over to his bed and just sit in it for the whole journey now, no fussing.

I second LOQs advice, Lara is fine in a crate but Sampson hates them, I use a dog bed too like what LOQs said, he also use to get sick during and after rides so I tried everything the vet gave but nothing worked so I tried ginger biscuits like LOQs and they worked so he now has doggy treat coated in ginger and that works just as great.
Top

we actually had a really good time yesturday. my Potatoe boy was eating cold french fries and ate them quiet happily while sitting in the seat with the door open and the car off. maybe this will work!
Baxter (AKA Bax, Chuckles, Chuckster) Rat Terrier, born 01/16/13
Top

Mother’s day and asparagus falls to the floor. Both dogs went for it. 13 lb ratty and 85lb ridgeback. Bax ripped her nose wide open. She backed off bleeding and thankfully her owner didn’t object. Both dogs are back to all love and snuggles. Sigh.

Edit. But. I have a five year old and three old humans coming soon and both are aweful with food soooooooo
Baxter (AKA Bax, Chuckles, Chuckster) Rat Terrier, born 01/16/13
Top

Owch! Poor ridgeback - she never stood a chance against Bax

<2 years old and still all paws. def didn't stand a chance against bax.

he had a truly aweful day. fought for food and then tiny humans invaded and then everyone was outside eating while he was locked inside. i came in and he was crouched trembling. unfortunately i came IN because it was time to get in the car..... and he ran away from me again. i just feel so awful, hes so clearly telling me what he DOES NOT WANT and i'm basically ignoring it.

Today has been the best day ever , my soon to be brother in law phoned today to tell me that my sister has given birth to tow beautiful baby girls ( she was told she was having one of each by the midwife but instead she had tow girls) both girls and my sister are doing well and when there all home I will be going to visit can't wait to meet my niece's

Congratulations ZaraD and Sister and future brother in law.

Last week we had fireworks and this week it is likely to be thunderstorms every night.

The first hint of fireworks was two questionable pops while I was out walking Sirius. They didn't exactly sound like fireworks, could have been a door slamming close by. She became unsettled, but continued her walk following one of her usual routes. Later that night was a single definite firework boom. Thunderstorms the next night. Then the following day we didn't even make it to the corner before there was a pop and she turned around and beat feet back to the house. All of a .13 mile walk.

We have given her the situational medicine a couple of times recently for the thunderstorms. Once last week on our shopping night. OH had given the medication a couple of hours before we needed to head out and the weather held off until just before we arrived back home. When we went upstairs later in the day, we found that someone had vomited up cheese. Sirius is the only one who gets cheese becase Sky will throw it up immediately.

Then last nght we gave the situational medicine to her in peanutbutter. about an hour later, she had supper. Two or three hours after that she again threw up. This time, she only left a wet spot.

Tonight the storms were not as severe as last night and we just went with the thundershirt instead of the situational medicine.

I had meant to call the behavior vet today to see if possibly there is an issue with the situational medicine, or our timing in giving it in relationship to her regular medication and dinner, but accidently left my phone at home.
Grammy to Sky and Sirius, who came to live with me, stole my heart, and changed my life forever as I took over their care and learned how to be a dog owner.
Top

@MPbandmom I've had alot of good success acclimatising Merlin to loud noises by using desensitisation tracks. Start on a low volume and slowly increase it. Not sure if they will help Sirius but thought I'd mention it. You can find siren noises, gunshot noises and firework noises on youtube if you search for those sounds 'for dogs'. Merlin is able to go on walks whilst there are fireworks and gunshots going off now. On our usual walk there are often bird scatterers going off constantly so it is just as well! He's total oblivious.

When I first joined this forum I had a teenage dog who was all bark and frustration. He's now 15 months old, and though progress has been slow in certain areas, and he went backwards in others, in regards to his reaction to dogs and his inability to settle in pubs he's a totally different dog.

He'll still bark if he sees a dog within the first 5 mins of his walk, and we've not been able to change that at all (he barks at everything for the first 5 mins, even nothing, he's just so excited to be going on his walk). So for those 5 mins we just avoid dogs and people as best we can, which has meant dragging him back indoors and waiting for across the road neighbours to go back inside! But after those 5mins he has actually been a pleasure. He's able to greet dogs on a lead without jumping on them to play. He's also making the right choices for himself when he sees a dog he can't greet. He'll look at them, take a few breaths like he's about to bark, then make the choice not to by turning his head away and shaking the stress off. He's being rewarded for all these right choices, and I can't be prouder. On top of that he's learnt that dogs on a lead aren't for greeting when he's off lead. He'll spot a dog, see the lead, then come back to me for a treat and follow in a heel all without me needing to call him!

As for pubs? Well just look at him! I didn't ask him to do anything, this was entirely his choice! We're thinking of trying to have a meal at one sometime soon, though he'll still need his space from other dogs. 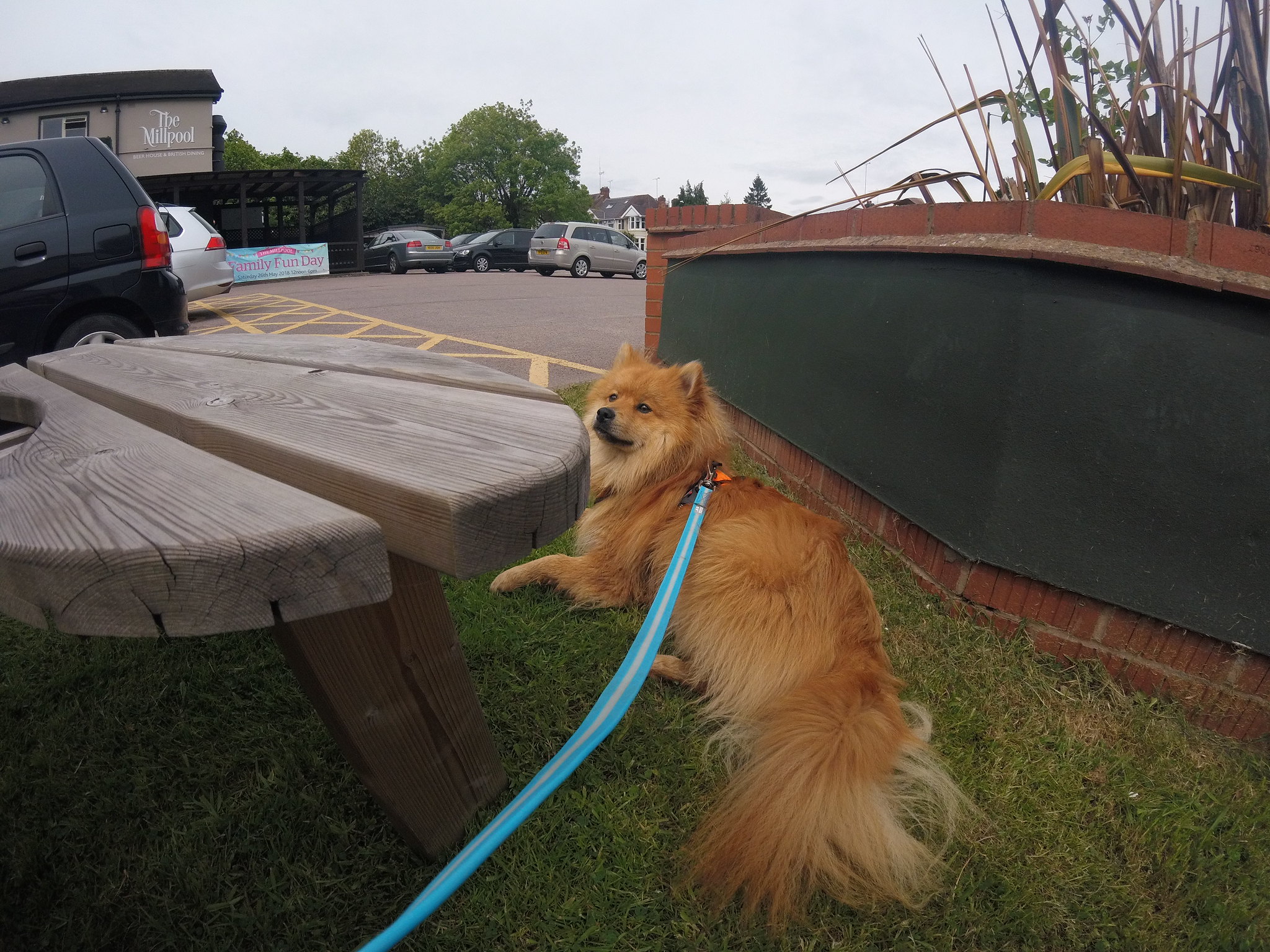 Thank you all , I'm meeting them both tomorrow for the first time.

Sampson a done really well with his phobia of gates it's been over a month since he reacted last.
Top

Bax has a hole in his leg O.o not sure how it happened or when he got it but he has a very shallow obvious hole in his leg that he keeps licking. hes cleared a considerable patch of fur around the area, almost his entire upper leg. no blood, no pinkness just a chunk cut out of his leg with a wide bare area devoid of fur. there isn't even a scab. he didnt seem fussed when i touched around the area so i dont think its painful? my hope is that its just itchy cause its healing and thats why he keeps licking it?

Is it definitely a wound, Shalista? I don't know if you get Alabama Rot where you are, but over here we've all got a bit twitchy about unexplained sores.

Overly twitchy, in many cases - one dog gets Alabama Rot after walking on a local heath, and although that dog had also recently walked in several other areas, and it's only one out of hundreds who walk there every day, a lot of people either don't go there any more or say they're really scared about the disease.
Jasper, lurcher, born December 2009
Top
Post Reply
3361 posts