Yes, you drove quite close by our house. Our house is in Orrington, just south of the Brewer, and 1A just bypasses downtown Brewer on way to Bar Harbor. We have been on that route quite often.

Beautiful area especially the time if year you visited.

Did you get to Acadia National Park? Many people go there and climb Cadillac Mountain to watch the sunrise.
Glad Ari did well on the long car ride. Now you have a taste of some of our travels with Sandy.

We went for a walk with a couple of friends & their two lurchers on Hengistbury Head today - a fantastic place for dogs, though that meant there were 100s of dogs there!

I was hoping that Jasper and their young bouncy saluki x greyhound, D, would enjoy each other's company, but no. D wanted to play 'bitey face', and when J showed no interest, D got a bit more pushy. Then J would snark, D would snark back, then their protective GSD x lurcher, L, would bundle in to protect her 'little brother', then they would both round on J. At one point I was doing my level best to block D from getting at J while our friends were trying to get D back on lead.

Poor Jasper - generally, sighthounds love other sighthounds and I think he gets even more confused and upset when a sighthound isn't 'nice' to him.

I did get some photos though! 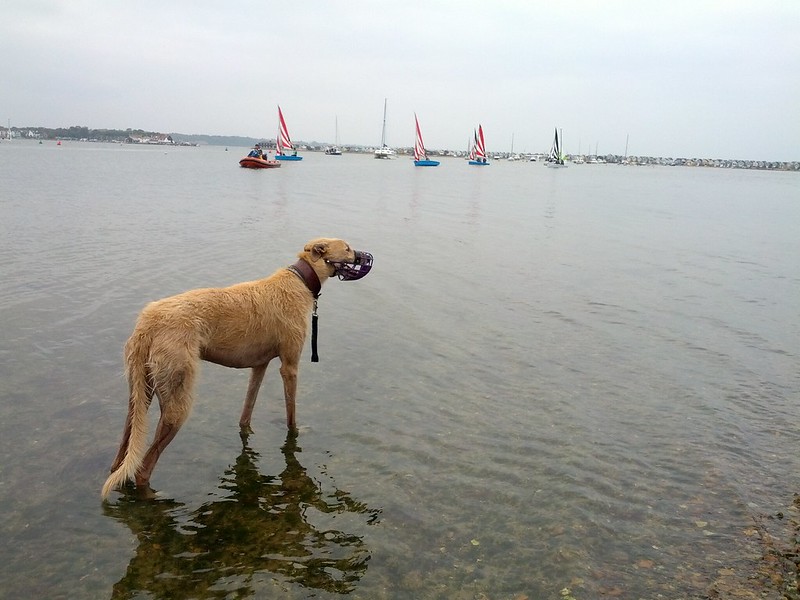 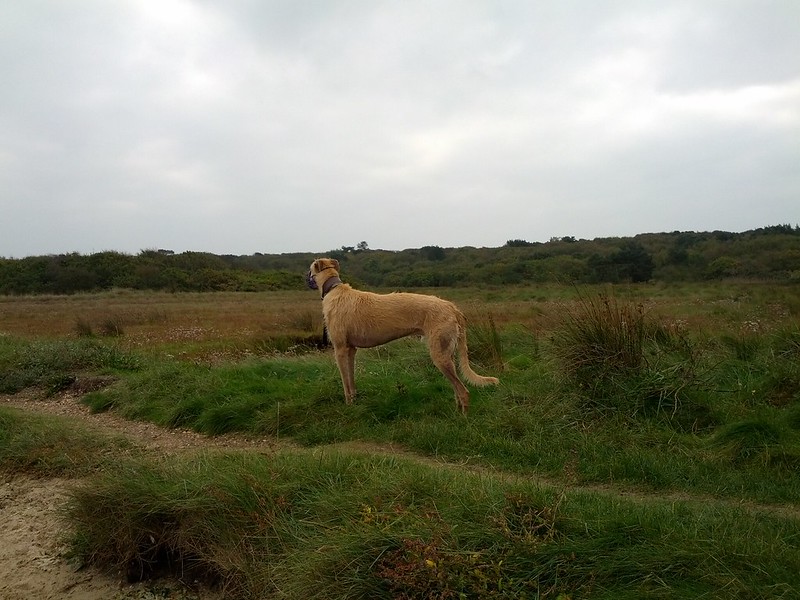 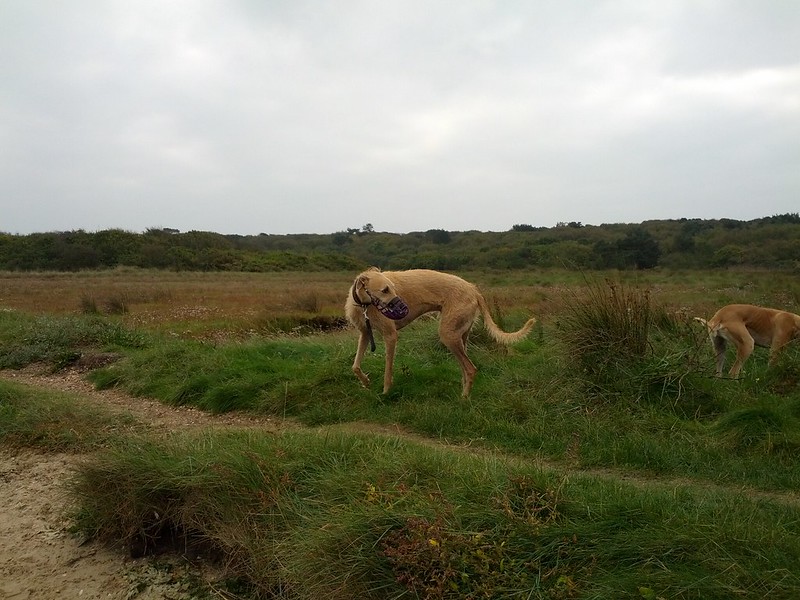 LEASH YOUR DAMN DOG. I was taking bax out for a quick wee and suddenly a tiny lil fluff ball came bounding across the grass at me. bax is iffy at the best of times as far as friendliness goes so i started pulling bax back and she just kept right on coming bouncing in his face. her owner wanders across the grass "Oh shes friendly" WELL MINE ISNT!!!!!!!!!!!!!!!!!!!!!!!!!!!!!!!!!!!!!!!!!!!!! thankfully bax and she were very civil to eachother despite how stressed he's been lately with the move... right up until the point where the owner hooked his index finger under her collar and lifted her into the air and then they BOTH snarked at eachother. I'm just thankful nothing worse happened. just what i need, bax eating the neighbors puff ball

I know what you mean. Stupid people who think every dog is as friendly as theirs. There are leash laws for a reason!

Sandy would have reacted same as Bax, but it would have been more nasty.

We were in the Navy Lodge in N. California last week. OH had Sandy on leash (rules in the lodge!) & he opened the door. Man in room next to us had either unleashed his dog as he was opening door to his room next door.
Another female fluff ball came running to Sandy. OH dropped leash & Sandy grabbed fluff ball & had her on ground & at her throat by the time Oh got control of leash...woooo. We had no idea Sandy knew to go for the throat. First time we had seen this in the 7 years we have had him. Not to sound bad ethnically, but Sandy’s previous owner who left him at the shelter were Mexican. (Sandy still understands commands in Spanish.

But, we have known he was fear reactive, now we saw that he has a real strong fear enough to fight.

It happened so quickly & right in front of our door. He’s a long legged chihuahua, & I know he is very territorial. So, maybe he was feeling a need to defend his room from possible intruder?

The owner grabbed fluffball, & thankfully he was on way to check out. Maybe he will be more wary next time he thinks his fluffball wants to play.

Ironically, Sandy had a very nice meet & greet with a female chihuahua. And, a female older boxer (RIP) hit Sandy with her paw, & he fell over & obeyed her as if she was momma.

We have always told other dog owners Sandy is not friendly. And, after this incident, Sandy remained hyper alert which didn’t help his stress levels or ours.

Even before this incident, we always carried Sandy through hotel & lodging hallways until we are outside & no one is around. And, we have gone to great measures to find rest stops & parks where no other dogs are around.

And, when rules are to have dogs on leash, & owners who think they are exempt since their dog is friendly are idiots.

Glad things worked out for Bax & you. I hope the fluffball owner has learned a lesson.
Diane
Sandy, Chihuahua mix b. 12/20/09
Top

Apparently one sign of a good lurcher is that you can feed his tail between his back legs and bend it up to reach to his spine. I can just about do that on Jasper. You ought to see the tails on galgos (Spanish greyhounds) though. They make his look stubby.

We met a friend & her young lurcher this morning on the heath and after yesterday's fun & games it was lovely to see that J was quite keen to chase and play. Ted has a habit of doing 'air nips' over the back of the neck to get him to play but J took this in his stride. They were joined by Zeus, a great big soft mastiff, and they even managed to play a bit as a threesome - J would normally be intimidated by a dog of Zeus's size and get grumpy. Though he did soon decide to stand well off to the side and let the youngsters get on with their silliness and I don't blame him. Us owners were standing well clear too so we didn't end up with our knees bending in the opposite direction to what they're supposed to

Yesterday, Jasper took a corner too fast, slipped on wet leaves, and landed on his side. He seemed fine, though later on while he was lying on his upstairs bed he was giving his back leg a good lick. Then he came downstairs, and this happened... 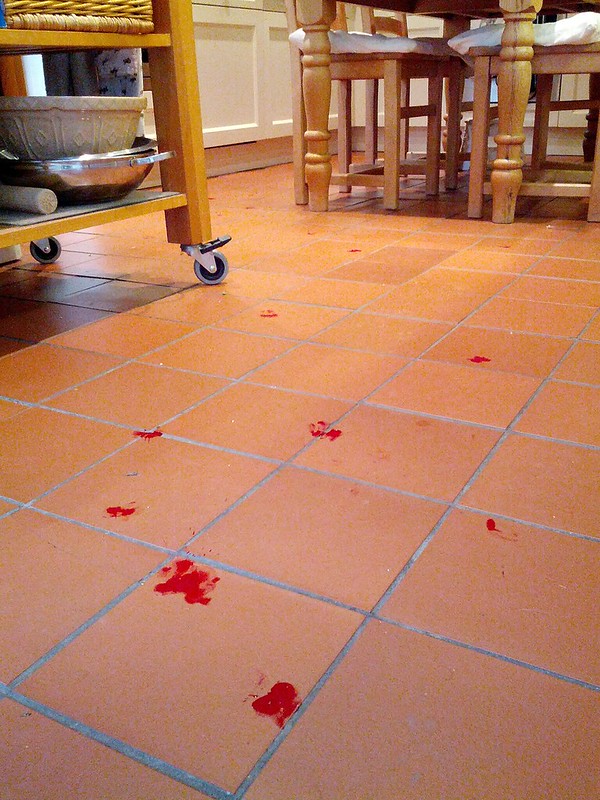 The blood was coming out in dollops

) it didn't start bleeding again, and it was fine following a lead walk this morning (apart from a little seepage on the quilt on my bed). As far as I can see it's only a graze, but I'm wondering if, with his thin skin and absence of protective fat, he managed to weaken a vein which opened up when he walked downstairs every time he put his foot down. 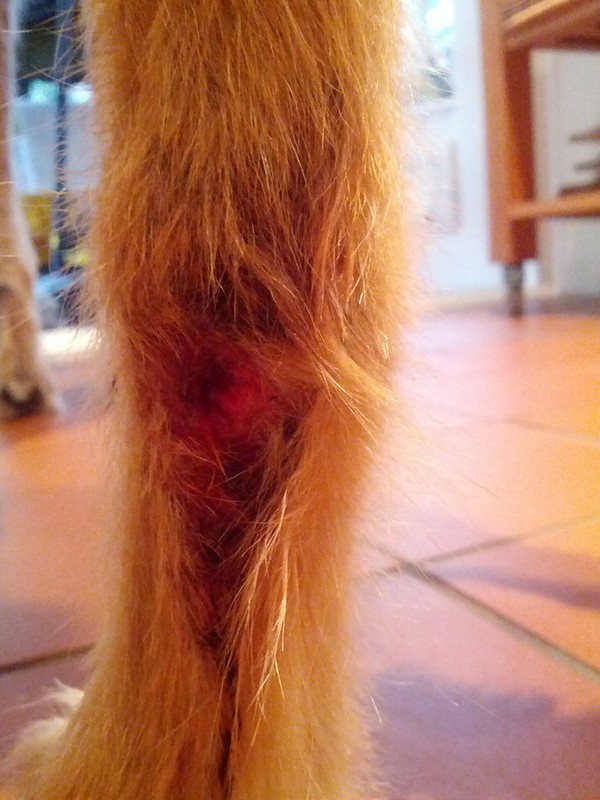 I believe I was mistaken about my dogs behavior. Every day I go to work and I pick Bax up and put him in the room. Everyday he runs like a lunatic with his tail tucked to avoid me leaving. Or so I thought. I legit just think he hates begging picked up. He doesn’t give a fig for being locked in that room he just hates being man handled. He didnt get dinner last night so when I dropped breakfast on my bedroom floor he scuttled right in without a glance at me. Sigh. If only dogs could speak.
Baxter (AKA Bax, Chuckles, Chuckster) Rat Terrier, born 01/16/13
Top

Shalista, a dropped breakfast would trump just about anything, anywhere, any time!

LotsaQs, I love that video - Merlin is so squooshable! One thing I noticed is that his happy play face can look quite fierce, so if he gets worked up with other dogs I can imagine it's possible that he looks more GRRRRRR than he really is

Jasper's fine - not even limping, though he's been licking his leg quite a bit. I've not checked the bed since he was dozing up there earlier though and I'm a bit worried there may be more seepage. Still, changing the bedding is OH's job as it's a lot easier when you're over 6'2" than just 5'

I would check Jasper’s leg & paw just to make sure there isn’t any more bleeding. If he’s still licking it, it could be a scab, more bleeding, or a bruise. Even if he has stopped bleeding, there could still be dried blood in the bedding so that won’t tell you as much.
I’m assuming that since he had been bleeding, that there is a scab that he might be trying to lick off. It’s a natural dog reaction to scabs.
OH bleeds very easily and when he’s holding Sandy, Sandy goes to town licking OH’s scab (don’t think it’s sanitary for humans, though).

So, I would just check to make sure that if there is a scab, or there might be more bleeding. Also, good idea to note the location. If it’s his paw and still open or with a scab, I would keep him from areas such as dirty water where he could pick up an infection. I’m not a vet (just a people nurse) so I am not sure what one would do, but I remember that when Sandy had scratched himself raw that the vet suggested a salve of tee tree oil (sp?) or even petroleum jelly. It helps sooth the area.

Cute video. I can see why people would want to pet him. And, he does look like he is trying to get dry. How does he do with hair dryer?

That’s how I fell at the rest stop. It was a light rain, I had on my rain jacket so I said I would take Sandy. And I was trying to hold his leash, hold my cane, and umbrella with no luck. So, Sandy ended up a little wet. But he really hates being wet.

He didn’t mind the snow last winter when we were at our house in Maine longer than usual. Actually, he enjoyed when the plow cleared a spot on the front lawn. He then found he had snow walls on which to lift his leg.

But, rain? I don’t even think he would want to get into water either.

Nice video clip, and Merlin is adorable. Yes, that’s the same spot that Sandy likes rubbed, and Sandy makes all these weird noises that I never hear any other time.

It's a few inches off the ground so luckily clear of the worst of the dirt, though there are a couple of small scuffs on his other leg, one just above the pad, so I'll be keeping my eye on them all. There's no scab, probably because he's been licking it a bit, and it's just a little weepy. Any sign of swelling, soreness and so on and I'll be down the vet so any infection can be nipped in the bud.
Jasper, lurcher, born December 2009
Top